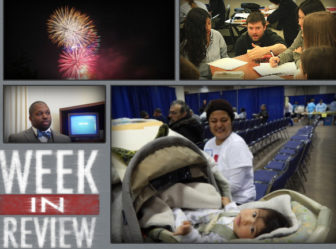 We’re in the homestretch: Monday starts the final full week of the 2014 legislative session. Some issues seem to be getting nailed down (universal pre-k; the UTC tax break deal; the courts’ guardian ad litem system). Others, not so much. Here’s a rundown:

Keno lives. The electronic lottery game that many in the Capitol dislike remains very much in play during the final two weeks of the 2014 legislative session.

Democrats float the idea that state government should offer a retirement savings plan for employees in the private sector. Republicans are appalled.

After an enthusiastic approval by the Senate, a $400 million UTC tax break bill heads to Malloy for his signature. The deal, to include a new world headquarters and engineering facility at the Pratt campus in East Hartford, is being heralded as a key to keeping Connecticut a major aerospace and engineering hub.

Lawmakers approved the nominations of two 66-year-old lawyers to be judges – even though they will be able to collect annual pensions of more than $100,000 after less than four years on the job.  “It’s such an outrageous system that it just begs for reform,” said Democratic Rep. Steven T. Mikutel, of Griswold.

Both houses of the General Assembly approved compromise legislation related to guardians ad litem, court-appointed lawyers who represent the interests of minor children in divorce cases. Some have charged that some GALs had abused the system and overcharged clients, who had no choice but to pay the lawyers’ fees.

Connecticut will launch a $3.4 million campaign to attract tourists from neighboring states this summer. The demographic being aimed is the college-educated “active leisure traveler.”

The Connecticut health insurance exchange signed up more than 200,000 people for coverage, but its record in enlisting small businesses was pretty dismal.

Day care centers in Connecticut are not inspected frequently enough, and inspectors’ caseloads are so large, they don’t have time to do careful enough surveys, reports the Office of Inspector General, which is under the U.S. Department of Health and Human Services.

How different are for-profit hospitals and those that are nonprofit?  In this fast-changing health care climate, this is an important question.

“I’ve never seen so many people in my life so happy to go to the dentist,” quipped one young Vernon man. Hundreds of people stood in line, some overnight, for free dental care at Hartford’s first Connecticut Mission of Mercy clinic, at the downtown XL Center.

A financing plan to buy and manage a 1,000-acre tract on the Connecticut coastline means a 15-year battle to save what’s called “The Preserve” is coming to a conclusion. Most of the acreage, which comprises the last large, unprotected coastal forest between New York and Boston, is in Old Saybrook.

“Wanted: Bright, passionate teachers for a new era” – the second in a series by Robert Frahm about Connecticut’s teachers in the 21st century.

The Senate voted overwhelmingly for a bill that consolidates two different proposals aimed at moving Connecticut toward “universal access” to preschool.

The U.S. Coast Guard unit based in New Haven has to enforce safety perimeters around dozens of private parties on Long Island Sound every year, many of which include fireworks over the water.

Connecticut will make more than $1.6 billion in supplemental payments into its cash-starved pension systems this fall.