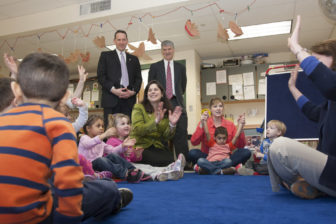 Three state senators visit a prekindergarten classroom in Middletown to highlight their plan the day after introducing "Smart Start."

Legislation aimed at creating universal access to preschool throughout Connecticut may have won near-universal support in the state Senate, but the omnibus bill is facing major pushback in the House.

Aresimowicz said he is “confident it will pass.”

At issue among several Democratic legislators interviewed is the “Smart Start” proposal introduced late in the legislative session. The proposal had no public hearing to relieve concerns that a drastic expansion of state-funded spots in public prekindergarten classrooms would hurt private preschools and create an unfunded mandate on districts down the road.

The plan — introduced by Senate President Pro Tem Donald Williams Jr. three weeks ago and backed by the state’s teachers’ unions — would expand the number of seats the state subsidizes in public preschools by thousands of students over several years by having districts and parents split the costs of enrolling more students.

“The towns that could benefit the most from expanding preschool can least afford to pay for it,” said Rojas, of urban districts struggling just to pay for current education services.

Gov. Dannel P. Malloy’s proposal to have the state pay for an additional 1,020 preschool seats in a hybrid of public and private programs, which was rolled into the omnibus early childhood bill last week, is not facing resistance.

Democrats can’t necessarily count on Republican votes to get it to the governor’s desk, as many of them also have concerns.

“That Smart Start is something we may be able to buy into, but we don’t know the need and what its impact,” said Rep. Tim Ackert, the ranking Republican on the Education Committee. “I am extremely upset with the process. They just stuck it on the bill with no regard to the process.”

The bill was approved in the Senate last week in a 33 to 2 vote.

Merrill Gay, the executive director of the Early Childhood Alliance that represents many private providers across the state, said he has had concerns about how increasing public programs would impact private providers.

Several private providers have said that over the years, as public schools began offering preschool or increasing preschool enrollment, attendance at many private programs has dropped, and these centers have suffered.

“The language in the bill should give them confidence this is not about shutting them down,” he said during an interview Friday.

Rep. Michelle Cook, D-Torrington, said she understands that the intent is not about shutting anyone down, but there is no research or data to show the demand for such an expansion to ensure it’s not just rerouting children from private preschools.

“I have concerns that it did not go through the public process. You have our private providers who are crying out ‘How does this impact us?’ and we don’t know… There are so many uncertainties, so people are concerned,” she said.

The bill does require districts when applying for the competitive grant to detail for the state how the new seats will go to fill unmet need.

The bill also includes language to create the Office of Early Childhood Education, a bill that had wide support but became a casualty last year as a result of tension between the House and Senate.

Gay said as Democratic leadership tries to rally the votes tonight, his providers plan on having a press conference Monday at the state Capitol regardless.

“We will either be celebrating the victory or saying ‘Not again’,” he said.