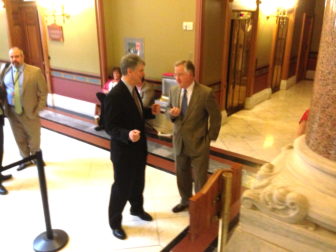 The state House of Representatives took a small step Saturday toward curbing the property-tax exemption enjoyed by nonprofit hospitals and colleges — and what some House members hoped would be a bigger step toward improving relations with the Senate.

The legislation subjects off-campus expansions to the local property tax. After July 1, if a nonprofit institution purchases property listed on a municipality’s October 2013 grand list of taxable property, it would remain subject to taxation.

The House voted 94 to 45 to approve and send the bill to the Senate, where the leadership declined to say if there was a promise of final passage before the annual session ends Wednesday in return for the House’s passage of a Senate bill expanding public preschool.

“I won’t comment on that,” said Senate President Pro Tem Donald E. Williams Jr., D-Brooklyn. Others said senators told them there was no deal, while House sources say there was.

The author of the property tax measure is House Speaker J. Brendan Sharkey, while the preschool bill belongs to Williams. The version of Sharkey’s bill passed Saturday was strenuously opposed by colleges, whose representatives say they were taken by surprise.

“It’s different from what we talked to the speaker about on Monday,” said Walt Harrison, the president of the University of Hartford.

Harrison said college officials left the meeting with the understanding that the bill only would apply to the purchase of property for non-educational purposes. He called the proposal passed Saturday a significant blow to higher education.

“This is a very dangerous bill,” Harrison said.

“It’s unfortunate President Harrison had taken a different understanding from the meeting,” said Gabe Rosenberg, a spokesman for Sharkey. He said the bill was relatively modest. “It’s hyperbole to say this is a significant blow to higher education or that it’s a dangerous bill.”

Harrison said the University of Hartford has no intention of expanding off campus, but the bill could harm other schools. Ironically, he said, the new restriction would not affect the state’s wealthiest schools, such as Yale University, whose tax-exempt status is guaranteed by state approved charters.

Williams and Sharkey have a history of clashing over each other’s pet bills, most recently over Williams’ bill to ban genetically engineered grass seed. It was summarily defeated in the House.

Sharkey, who represents Hamden, the home of Quinnipiac University, long has been a proponent of overhauling the state’s system of reimbursing municipalities for tax-exempt property.

The state partially reimburses municipalities for tax-exempt with a formula for payments in lieu of taxes, or PILOT. But the formula is funded at various levels, depending on available revenue.

Sharkey originally proposed what he called a reverse PILOT. The nonprofits would pay their municipal taxes, then seek reimbursement from the state.

The limited changed approved Saturday begins what Sharkey said he hopes is a continuing reappraisal of who pays property taxes in Connecticut.