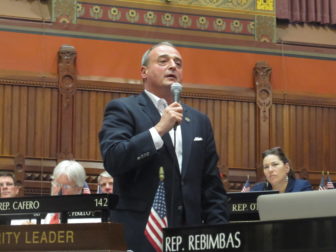 The General Assembly adopted a $19 billion budget early Sunday that, to stay in balance, relies on about $200 million in fund sweeps, risky savings and revenue assumptions – including the last-minute discovery of $75 million in “miscellaneous” tax receipts.

The package for 2014-15, negotiated by Gov. Dannel P. Malloy’s administration and majority Democratic legislators, boosts spending by 2.5 percent while delaying planned tax cuts for teachers and consumers and canceling the launch of keno gaming.

And while majority Democratic legislators insisted the plan is lean, balanced and reflects  their top priorities, Republicans charged that gimmicks threaten the state’s future.

They noted that nonpartisan fiscal analysts are projecting a $1.33 billion deficit in the first state budget after the election, a gap of nearly 8 percent.

The Senate voted 21-15 shortly after midnight to approve the budget following a two-hour debate. The House approved it Saturday evening 91-55 after discussing it for more than three hours. The measure, which passed in both chambers largely along party lines, now heads to Malloy, who is expected to sign it.

The budget deposits $38 million into the emergency reserve, lifting what is commonly known as the Rainy Day Fund to $309 million – or just one-quarter of the post-election deficit.

“You own the budget and you own the economy we’re in,” Senate Minority Leader John P. McKinney, R-Fairfield, told majority Democrats, warning that the post-election deficit looms large over Connecticut’s future.

“We take this for granted, but these are essential services we depend on every day, and they are not free,” Williams said. “And we do it with only a 2.5 percent increase” in spending, he added. ” … We are headed in the right direction, because we and Governor Malloy have made tough choices.

Malloy and his fellow Democrats in the legislature had to scramble over the past week after a dramatic drop in tax receipts not only eliminated most of this year’s $505 million projected surplus, but opened a $285 million hole in the budget they were crafting for the fiscal year that begins July 1.

The Democrats’ first solution to this crisis was to put most tax relief they’d sought on hold.

Malloy scrapped plans for a $155 million rebate program that would have given most middle-income taxpayers $55 in September.

A plan to exempt 25 percent of retired teachers’ pensions from the state income tax was delayed and scaled back. It now stands at 10 percent and doesn’t take effect until the tax returns retirees will file in the spring of 2016.

But that would come after the election. And given the huge deficit looming at that point, some lawmakers were skeptical that the tax break for teachers would be implemented then either.

All totaled, the new budget delayed or canceled more than $50 million in tax relief. Besides the teachers’ cut, two sales tax breaks were also postponed:

The budget does extend a tax credit for business investors that had been scheduled to expire this July.

But while tax changes wiped out about $50 million of the $285 million in red ink in the new budget, much of the rest is raising eyebrows.

Perhaps the biggest was a last-minute prediction by Democrats and the administration that “miscellaneous” tax receipts would jump an extra $75 million in the new budget.

“All of a sudden, voila, out of the thin, blue air?” he said, noting that neither the governor nor Democratic legislators mentioned the good news during their Friday press conference when they claimed to have solved the fiscal crisis.

Democrats said Saturday that the tax department learned much from efforts this year to crack down on tax delinquents and Medicaid fraud, and is confident it can collect an extra $75 million next year.

State tax officials “believe there is a reservoir of unpaid taxes that they can relatively easily collect,” said Office of Policy and Management Secretary Benjamin Barnes, Malloy’s budget director.

“We’re going to rely, to the tune of 75 million bucks … on people who, by definition, don’t pay their taxes?” House Minority Leader Lawrence F. Cafero, R-Norwalk, asked. “If you tell that story at home, people scratch their heads.”

Nonpartisan legislative fiscal analysts not only declined to confirm the estimate, but added that “we have sought, but not been able to obtain other information to support” the tax department’s assertion.

Still, Democrats insisted there is much to be proud of in the new budget. 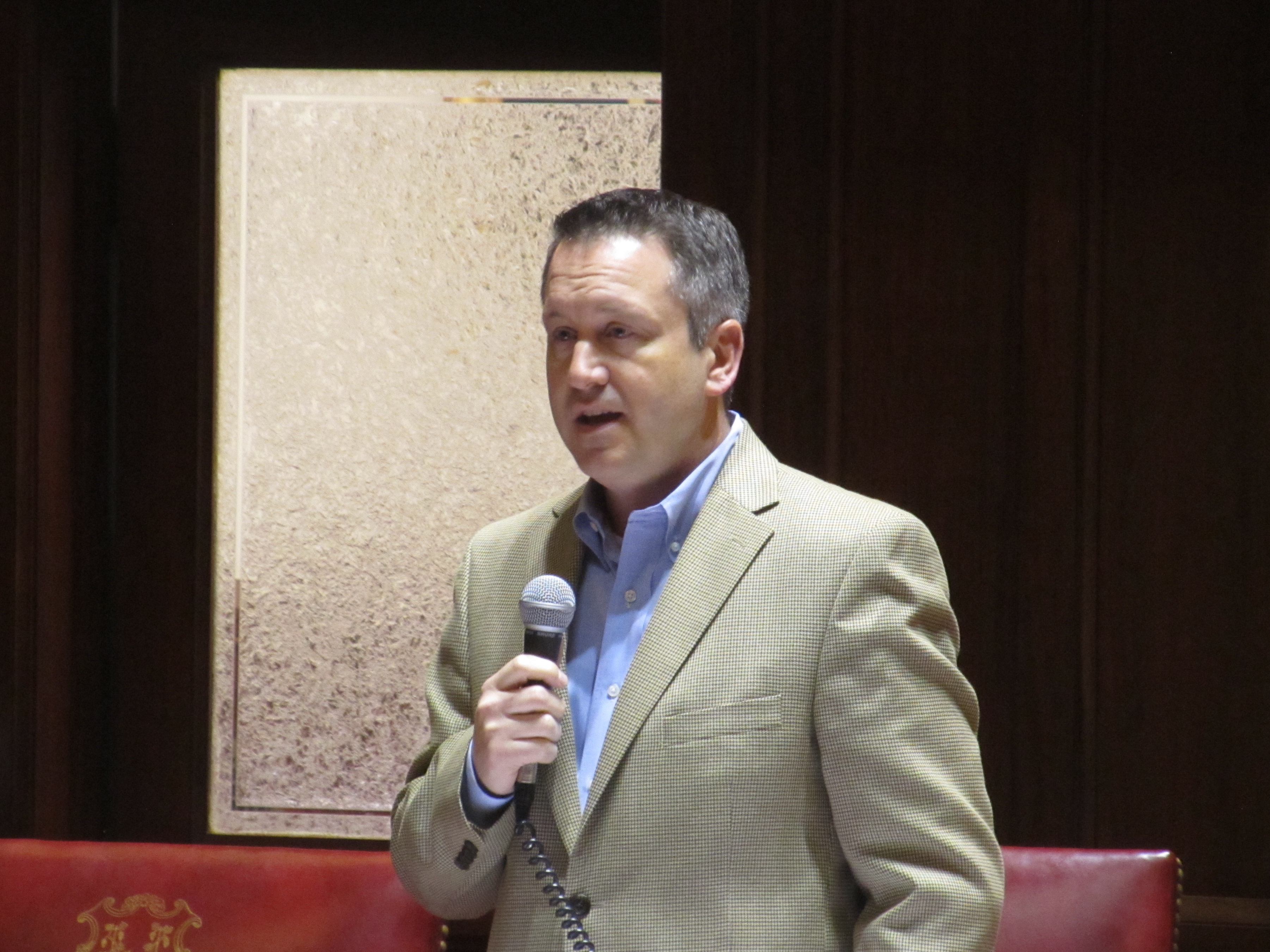 “I believe Democrats showed tonight that our priorities are with families, the elderly and college students, with pre-K children and with those individuals who have developmental disabilities or behavioral health needs,” said Sen. Beth Bye, D-West Hartford, the Appropriations panel’s other co-chairwoman. “We rose to meet those challenges at the end of our budget-making process this year, and I believe we did so in a fiscally responsible manner that meets the many and various needs of Connecticut’s residents.”

Local schools, the state’s merged public college system and city and town governments were among the winners in the new budget.

The plan spends $98 million more on primary and secondary education, including a $48 million jump in the Education Cost Sharing grant to school districts.

Nearly $28 million also goes to local districts or to help increase enrollment in school choice programs in the Hartford region, as mandated by a state Supreme Court desegregation order.

Though cities and towns got most of their assistance for education, they also received another $33 million in the new budget in non-education aid. This includes $16 million more in reimbursements to offset lost local revenues tied to tax-exempt colleges, hospitals and state-owned property.

“Our mayors and first selectmen breathed a huge sigh of relief when we saw today’s budget numbers,” said Betsy Gara, executive director of the Connecticut Council of Small Towns.

The new budget also included a big assist for the Board of Regents for Higher Education system, which includes the state universities and the community colleges. There will be a nearly $42 million increase to shore up the system’s budget and to lure new students to enroll by offering them a free course their first semester. Officials hope the other courses these new students will be paying to enroll in will help the school system with its $42.1 million anticipated deficit for the fiscal year that begins July 1.

While Democrats employed $75 million worth of optimism to improve the tax side of the new budget, they got creative to balance the spending side.

They saved $52 million by ignoring the recommendation of Comptroller Kevin P. Lembo – also a Democrat – who warned that an extra $52 million was needed to pay for benefits tied to surging worker retirements.

The state is contractually obligated to pay the benefits, even if it hasn’t saved for them.

Democrats scraped together $32 million for ongoing programs from limited sources such as: the tobacco health trust; the transportation fund; this year’s surplus; and reserves tied to the conversion of finances to Generally Accepted Accounting Principles.

“It’s disappointing but not at all surprising,” Bryte Johnson, state director of government relations for the American Cancer Society Cancer Action Network, said of the tobacco fund raid. “This is a favorite target of the legislature and various administrations.”

Since 2001, the state has diverted funds from the tobacco fund 65 times, totaling more than $175 million.

Johnson called the diversions frustrating given the thousands who die annually because of tobacco and the millions of dollars in health care bills it costs the state.

The U.S. Centers for Disease Control and Prevention has recommended that Connecticut spend $32 million per year on tobacco control programs. But actual state spending doesn’t come close to that. Between 2003 and 2012, the board that oversees the state’s Tobacco and Health Trust Fund has funded about $21.5 million in smoking cessation programs, tobacco counter-marketing efforts and other anti-tobacco programs.

Democrats also rebalanced the 2014-15 budget with $20 million in “lapses” – savings targets to be achieved through undefined efficiencies rather than through specific program cuts.

The budget’s bottom line also was reduced – technically – by shifting more than $30 million in spending outside of the traditional budget.

Those most House Democrats backed the measure, Reps. Frank Nicastro of Bristol, Daniel Rovero of Killingly and Edward Moukawsher of Groton broke party lines and sided with the GOP against the budget. In the Senate, Joan Hartley of Waterbury was the only Democrat to oppose the spending plan.

Moukawsher said he fears the state has built a budget that is not sustainable. “I really feel like we’re missing an opportunity to make life easier for ourselves,” he said.

The budget increases funding for the Department of Children and Families — the state agency responsible for the care of thousands of abused and neglected children — by $3.7 million. This is $12.5 million less than legislature initially approved when it passed the two-year budget last spring.

Child advocates and the federal court monitor have routinely expressed concerns with the spending cuts the agency has incurred in recent years while costs continue to increase.

DCF has achieved significant savings in the past few years by placing fewer abused and delinquent children in costly out-of-state group homes and other facilities, and reducing the number of social workers in the agency. But the governor and state lawmakers have largely raided those savings for use elsewhere.

The child advocacy group Connecticut Voices for Children reports that state funding of DCF declined by $183 million from fiscal 2009 to 2014 — a 19 percent cut when factoring in inflation.

The DCF has been under federal court oversight for years, and its court-appointed monitor has recently raised concerns with staffing levels of social workers. This budget provides no increased funding for personnel.