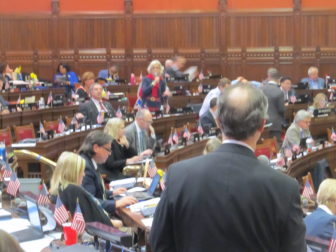 The House of Representatives unanimously gave final passage Monday to consumer protections for electric customers, keeping intact a Senate bill praised by legislators as a breakthrough, while advocacy groups complained it did not go far enough to protect consumers from predatory marketing.

The legislation is an attempt to impose order on the deregulated energy market that gives consumers a choice between accepting the standard offer of Connecticut Light & Power or United Illuminating, the two major electricity transmission utilities, or doing business with one of the dozens of retail suppliers.

Consumers complain that some suppliers entice them with teaser rates that quickly exceed the standard-offer price of CL&P or UI.

The bill directs the Public Utilities Regulatory Authority to impose a new billing format by July 1, 2015, that will clearly disclose the retailer’s rate compared with the standard offer, the length of contract, cancellation fees and any change to the rate due to take place in the next billing cycle.

It prohibits suppliers from raising rates for the first three billing cycles of new contracts after July 1, 2014. It also requires electric suppliers to notify residential customers in advance of rate changes and prohibits charging cancellation or early termination fees to residents who move within state and do not change suppliers.

“It really gives consumers more information than I think any kind of billing system ever did,” said Rep. Lonnie Reed, D-Branford, co-chairwoman of the Energy and Technology Committee. “It’s very, very valuable information.”

The bill addresses a major source of constituent complaints, especially from the elderly: aggressive marketing by electric suppliers, some of whom entice customers with low variable rates that jump with little warning.

AARP, the Connecticut Citizen Action Group, ConnPIRG and the Legal Assistance Resource Center say the bill was too deferential to the interests of electric retailers in that it failed to cap variable rates. They unsuccessfully lobbied House members to make changes.

“I do stand in support of this. I hope we go much farther next session,” said Rep. Vincent J. Candelora, R-North Branford.