Washington – Miles Rapoport has been at the center of many brutal political fights, but is he hard-nosed enough for Washington? 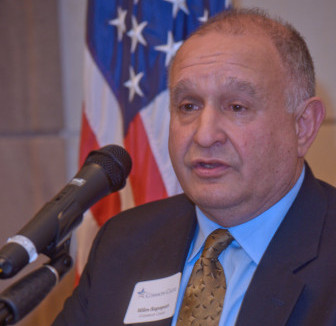 Miles Rapoport is the new president of Common Cause.

That’s the question that looms large as Rapoport, a 64-year-old career activist from Connecticut, takes the reins of Common Cause in a city that is ruthless and unforgiving and whose hyper-partisanship has sunk hopes of even the most modest accomplishment – especially when it comes to issues like campaign finance reform.

In early April, just weeks after Rapoport moved into Common Cause’s downtown offices, the Supreme Court  handed down its ruling in the McCutcheon v. FEC case that struck down the aggregate limits on political contributions.

The McCutcheon decision was a wake-up call to a man who spent years trying to reform Connecticut’s campaign finance laws – both as an activist and the state’s secretary of the state — and succeeded.

In an interview with The Connecticut Mirror, Rapoport called the ruling “the last in a long line of miserable Supreme Court decisions that stretch back to Buckley v. Valeo,” a 1976 decision that introduced the idea that money counts as speech and eliminated any previous restraints on unlimited campaign spending .

He said his first impression of Washington, D.C., was dominated by the dizzying amount of political activity, including meetings and visits to congressional officials. Progressives like him have a robust agenda, he said, adding, “But it’s an enormously uphill climb.”

“There’s a lot of affirmative work in the states,” Rapoport said. “The states are the genuine laboratories of democracy.”

He also said, “There’s certainly a cynicism out there about whether Washington can solve any major problems.” But even in state capitals like Hartford that are open to reform, Rapoport worries about the danger of back sliding.

“Connecticut has the best campaign finance law,” Rapoport said. “But it requires a constant defense because of the Supreme Court environment.”

Rapoport’s resume shows that he’s a pro at grass-roots work and the operations of state legislatures.

He served five terms, from 1985 to 1995, representing West Hartford in the Connecticut General Assembly, and one four-year term as secretary of the state of Connecticut.

But his activism began long before that, in the tumultuous, rebellious 1960s, when Rapoport came of age.

Bob Creamer, a political organizer and strategist, and his wife Rep. Jan Schakowsky, D-Ill., hired Rapoport in the early 1970s at an organization founded by Saul Alinsky that sought to mobilize people on a wide range of issues, from pollution to mortgage lending practices. (Alinsky is considered the father of community organizing.)

Creamer called Rapoport “the best organizer we have ever seen,” adding, “He had to drive a cab because we couldn’t pay him enough.” 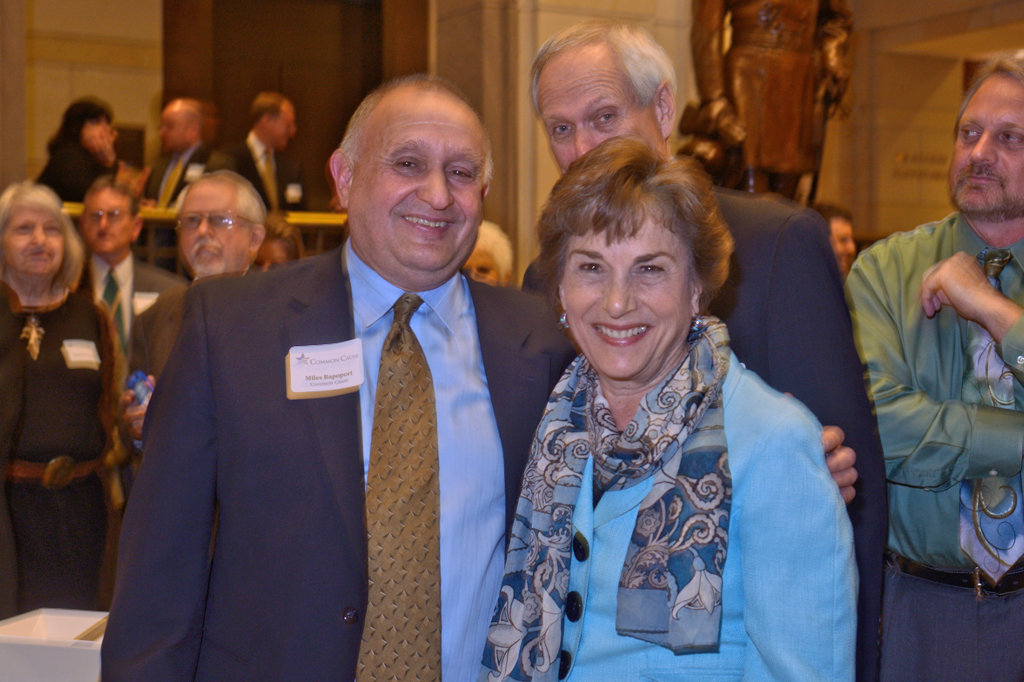 Rapoport with Illinois Rep. Jan Schakowsky and her husband, Robert Creamer, who called Rapoport "the best organizer we have ever seen."

Schakowsky said Rapoport was tenacious. “He would do whatever it takes,” she said. “If he was involved in something, we would win.”

Rep. Joe Courtney, D-2nd District, sat next to Rapoport in the General Assembly and served as his lawyer when Rapoport was secretary of the state. He worked with Rapoport on a bill that would establish a state income tax in Connecticut – a bill former Gov. Lowell P. Weicker signed into law in 1991.

Rapoport’s road from Connecticut to the nation’s capital ran through New York.

In 2001, he became president of Demos, a progressive think tank in New York that focuses on fighting economic inequities in America and developing a more inclusive democracy.

That made him a perfect fit for Common Cause.

The organization founded 44 years ago by Republican John W. Garner, who came to Washington to serve in President Lyndon Johnson’s cabinet, was an independent, nonpartisan organization “for those Americans who want to help in the rebuilding of the nation.”

But now its core issues – cleaning up elections and political ethics — are victims of the same partisan gridlock that immobilizes the rest of Washington.

So, under the direction of Chairman Robert Reich, a former Labor secretary who worked in the Clinton administration, Common Cause has shifted its focus to fighting economic inequality in American — an issue Rapoport worked on during his 13 years at Demos.

National Democrats will use the issue of economic inequality to target the GOP this year in the midterm elections, blaming Republicans for blocking bills in Congress that would raise the federal minimum wage, extend unemployment benefits and strengthen equal pay laws.

Rapoport said, “There is a growing number of business leaders and moderate Republicans who are concerned things are going way too far.”

But he admitted the change in direction has sparked debate.

“I’m sure there will be some people who say these are issues Common Cause should not take on,” he said.

Hans von Spakovsky, senior legal fellow at the Heritage Foundation and a former Federal Election Commissioner, said Common Cause is taking a wrong turn in focusing on economic inequality.

“I think that’s a sign of how much they’ve been losing membership,” von Spakovsky said.

He says the “extremism” of Common Cause will guarantee that no Republican ever votes for a campaign finance bill. The last time that type of legislation was approved by Congress – on a bipartisan basis – was in 2002 with the passage of the McCain-Feingold bill.

“With campaign finance, Common Cause could at least say, ‘This is a bipartisan way to clean up elections,’” von Sapovsky said. “But with its new agenda, it seems like it is pushing a partisan public policy issue.”

Rapoport’s work at Demos, where he grew an advocacy upstart into a robust organization, also makes him a great fit for his new job.

It took recruiter Issacson Miller nearly a year to determine that Rapoport was the best choice to replace Common Cause President Bob Edgar, a former Democratic congressman, who died in April 2013.

For now, Rapoport commutes between West Hartford and Washington, D.C. His wife, Sandra “Sam” Luciano, is a professor at Capital Community College in Hartford.

But he’s slowly making Washington his own. He said he was surprised by the “dinginess” of his office and immediately gave it a coat of paint and decorated it with metal sculptures made by his father.

He has big plans for Common Cause. He wants its membership, now about 250,000, to grow to 1 million in four years.

That’s an ambitious goal. But Rapoport is not a bomb-thrower or an impatient man. He’s willing to wait – years if necessary — to win.

Former victories were not overnight successes.

His push for Election Day registration in Connecticut, which began in 1987, was not approved by the state legislature until 2005.

Rapoport tried to move to Washington before, when he ran in 1998 for the seat held by Rep. Barbara Kennelly, who quit Congress to run for governor.

But John Larson defeated him in the Democratic primary.

At a Capitol Hill reception held last month to welcome Rapoport to Common Cause and Washington, D.C., Rep. Larson, D-1st District, was among several who praised Rapoport.

“He wants to go where the biggest problems exist,” Larson said.