Climate change and us: What you need to know 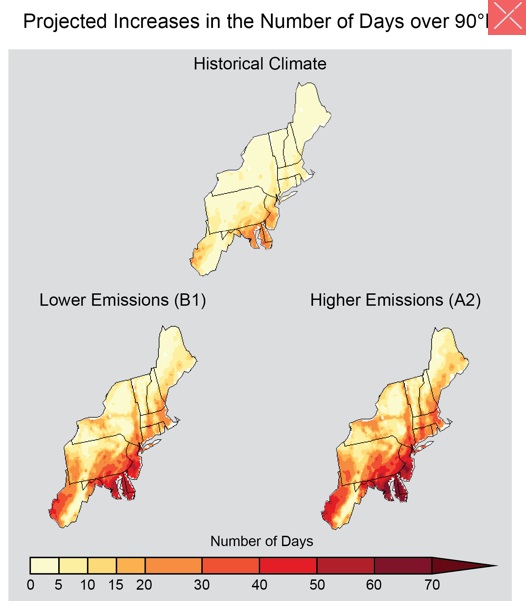 Days projected to be over 90 degrees in the Northeast

The widely anticipated National Climate Assessment unveiled today in Washington, D.C., portrays the stark reality of climate change’s toll on the nation already and the potential for increasing and specific impacts if action across many segments of life is not taken.

Nationally it paints a picture of nowhere-left-untouched by combinations of increasing temperatures, more extreme weather, drought, heavier downpours, sea level rise and more. And it lays the blame squarely on people. “The majority of the warming at the global scale over the past 50 years can only be explained by the effects of human influences,” the report states.

But regionally there are differences in what has happened so far and what the most critical of the future threats are likely to be.

“The overarching highlight was that is not a future problem,” said Adam Whelchel of The Nature Conservancy’s Connecticut office, a lead author on the Northeast chapter of the report. “It’s very, very clear, particularly in the Northeast, that this has moved firmly into the present.”

Among the sobering observations in the Northeast, which extends from Maine to West Virginia, is the largest rise of any region in extreme precipitation since 1958. Since 1895, the region has registered temperature increases of nearly 2 degrees, precipitation increased more than 10 percent, and coastal flooding has increased as a result of a sea level rise of about 1 foot, which is higher than the global average increase of 8 inches.

The Northeast regional report enumerates the widespread impacts from all these factors in four key messages:

“Heat waves, coastal flooding, and river flooding will pose a growing challenge to the region’s environmental, social, and economic systems. This will increase the vulnerability of the region’s residents, especially its most disadvantaged populations.” 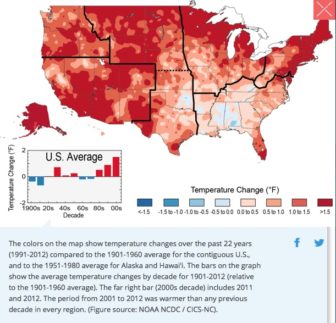 Even Whelchel, who has worked on climate change impacts and mitigation for years, was surprised at the depth of the human impact and how much harder the changing conditions are likely to hit economically at-risk people.

“I thought there were social impacts given Irene and Sandy,” he said, referring to the two tropical-style storms in 2011 and 2012, respectively. “I didn’t really have a handle on where the chronic background implications were. People in urban centers from heat and implications for health. It’s quite astonishing particularly in Philadelphia, New York and Boston.”

Roads, rails, airport facilities and runways could be damaged or destroyed. The report singles out I-95 and the Amtrak corridor as being especially in danger. Ports face the prospect of disappearing, taking vital commerce, jobs and tax and other revenue with them. The port of Baltimore, alone, accounts for more than 50,000 jobs.

Damage to low-lying structures from water and the particularly corrosive salt water is likely. In Boston, the report estimates that direct damage and associated costs from building flooding could hit $94 billion by 2100.

“Agriculture, fisheries, and ecosystems will be increasingly compromised over the next century by climate change impacts. … Adaptive capacity, which varies throughout the region, could be overwhelmed by a changing climate.” 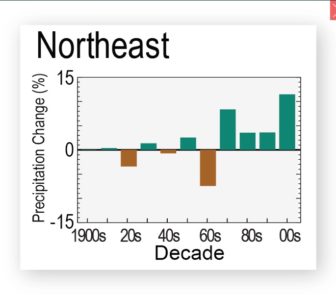 The impacts include direct damage from storms; lack of summer rain, resulting in drought and increasing reliance on diminished water systems; seasonal shifts that could bring extended warmth in fall along with unseasonable severe frosts; migratory bird and vital insect mismatches with food supplies; general wildlife and vegetation shifts – including the fish and shellfish species shifts seen in Long Island Sound; and new and more pronounced appearances of insects, pathogens and invasive species.

Since the early 1800s, the report noted that New England has lost 39 percent of its marsh coverage – a critical part of a shoreline’s ability to absorb water, prevent erosion and withstand storms.

“Do our ecosystems help keep us safe?” Whelchel asked. “Do they have the capacity to maintain resilience and help us into the future?”

He also noted that farmers can explore new crops, but that comes with physical risks and financial burdens.

“While a majority of states and a rapidly growing number of municipalities have begun to incorporate the risk of climate change into their planning activities, implementation of adaptation measures is still at early stages.”

Whelchel has worked with communities in Connecticut on formulating coastal resilience plans. Guilford is furthest along. Madison is also working toward a plan, and there is potential for a regional plan along most of the inner Sound.

Key for them, he said, is considering heat, precipitation, coastal and inland flooding and “the slow-motion unfolding of sea level rise.”