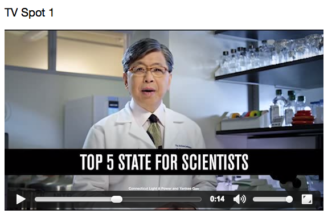 Dr. Edison Liu of Jackson Laboratory is featured in one of the two new ads.

The administration of Gov. Dannel P. Malloy began a $569,637 television campaign Monday promoting the state as a place to do business, drawing complaints from a Republican gubernatorial candidate over plans to run some of the ads on cable systems and stations in Connecticut.

Danbury Mayor Mark Boughton, one of five Republican candidates for governor, called on Malloy to pull the ads from Connecticut television stations and cable systems, saying they are thinly disguised political spots even though Malloy does not appear, nor is he mentioned by name.

“I think the governor knows his Achilles’ heel is the economy of this state. He knows he has to address that,” Boughton said.

Boughton said any ad promoting the state’s economy to a domestic audience, especially ones featuring some of the companies Malloy helped bring to Connecticut, is a boost to the first-term Democratic governor. The campaign is called, “Meet the job creators.”

“If he did it strictly out of state and more geared to that market, it would make a little more sense to me,” Boughton said. “Why would you promote Connecticut to Connecticut?”

The first two ads can be seen here at ctforbusiness.com.

Andrew Doba, a spokesman for Malloy, said the ads encourage business executives, whether they are in Connecticut or out of state, to contact state economic development officials to explore the ways in which the state can help companies expand here.

“We think it’s important to get that message out to them as well,” Doba said. He said the governor was concentrating on creating jobs, not playing politics.

The administration says 92 percent of the ad budget will go to running commercials on New York cable systems, with the remainder, $43,221, buying time on cable and broadcast television in Connecticut. The in-state broadcast buy focuses on the Sunday news shows: Face the Nation, Meet the Press, This Week and Sunday Morning.

One of the commercials features Edison Liu, the chief executive of the Jackson Laboratory, the company Malloy coaxed to Connecticut to open a genetic research institute with a $291 million aid package.

“So many breakthroughs are happening right here,” Liu says in the commercial.