CT truckers, other motorists could find relief at the pumps this summer 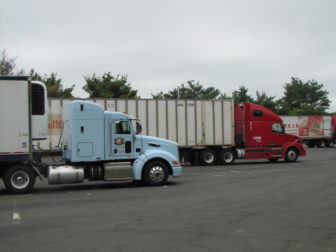 Trucks parked at the state rest stop on I-84 in Willington.

Connecticut’s trucking industry will get its first break in four years – albeit a small one — at the fuel pumps this summer, according to a new rate released by the state’s tax department.

And consumers of regular gasoline also could be enjoying a modest drop in prices if federal energy market forecasters and the Connecticut AAA are correct.

“We definitely needed a drop, but the tax is still too high,” Michael Riley, president of the Connecticut Motor Transport Association, said last week, referring to the new diesel fuel tax rate of 54.5 cents per gallon that takes effect July 1. This is down 0.4 cents per gallon from the current rate.

Members of Riley’s association, which represents more than 800 trucking-related businesses, have been reeling in recent years from a surging diesel rate that ranks highest among all states.

This rising cost has led some companies to freeze vacant driver positions, while many others have passed the higher cost along to the businesses that receive their goods, Riley said.

University of Connecticut economist Fred V. Carstensen, said the danger of high diesel fuel prices is a “subtle” yet significant impact on the price of groceries and other retail goods.

“We have done a very poor job in developing alternative delivery systems,” including rail, air and deep water ports, Carstensen said, adding it leaves Connecticut much more reliant on trucking than most other states.

The legislature and Gov. Dannel P. Malloy ordered a comprehensive study of Connecticut’s tax system when the new budget was adopted earlier this month.

Riley said that while the diesel tax doesn’t draw the attention of larger levies on income, sales and business earnings, he hopes the panel will look at fuel rates.

“I don’t think we really want to preclude the committee from looking into any taxes that affect our economy, and that one [diesel tax] certainly does,” said Rep. Patricia Widlitz, D-Guilford, co-chairwoman of the legislature’s Finance, Revenue and Bonding Committee.

Under a statute adopted six years ago, the diesel tax is adjusted annually using a complicated formula that analyzes wholesale diesel price changes over the prior year, as well as the state’s wholesale tax on gasoline and certain other fuels.

And while state taxes on regular gasoline haven’t grown to the extent that those on diesel have, the wholesale gasoline levy jumped by one-sixth last July. That increase was worth between 3 and 4 cents per gallon based on last summer’s wholesale prices, and represented one of the largest fuel tax hikes in a single year in state history.

“We expect gas prices to remain steady or maybe drop a bit heading into the first half of summer.”
Aaron Kupec
Connecticut AAA spokesman

But while gasoline tax rates aren’t changing this summer, motorists still could be in for some good news.

The U.S. Energy Information Administration recently projected the average price of regular unleaded gasoline this summer would be $3.57  per gallon nationally, one penny below last year’s average.

And the Connecticut AAA sees that trend in playing out here as well.

“We expect gas prices to remain steady or maybe drop a bit heading into the first half of summer,” Connecticut AAA spokesman Aaron Kupec said. “… Overall we’re expecting gasoline prices to be slightly lower than they were in 2013.

The peak so far this year in Connecticut has been $3.95 per gallon, and the AAA recorded an average price of $3.92 on Friday.