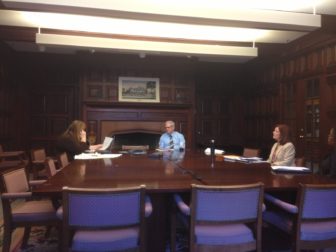 Empty chairs: The Board of Regents voted by phone.

With little public comment, the Board of Regents for Higher Education accepted the recommendations of a search committee in a brief meeting conducted by telephone conference. New presidents also were named for two of the state’s other community colleges, Asnuntuck and Three Rivers.

The presence of Williams among the three finalists for Quinebaug, a 1,900-student college in Danielson, a borough of Killingly on the Rhode Island border, had drawn political and media attention to the search.

The hiring of politicians as college presidents has precedent at various levels of academia in Connecticut and nationally, but news of Williams’ status as a finalist drew questions about his qualifications and generated a critical op-ed piece by two former trustees.

One of the Regents eligible to vote on the appointment was Lawrence DeNardis, a former state senator and congressman who was the president of the University of New Haven. The former Senate president of Massachusetts, William Bulger, served as chancellor of UMass.

Williams, 56, is leaving the General Assembly in January as the longest-serving president pro tempore of the Senate, a post that gave him ultimate control over what bills came to a vote. Had he been selected, Williams could not have taken the job until his term expired.

The college he hoped to lead is in Danielson, a borough of Killingly, and sits inside Williams’s 29th Senatorial District. Williams, a lawyer who has been a full-time legislator in recent years, lives in Brooklyn, the town adjacent to Killingly. He is a former radio reporter and first selectman.

Neither Gregory Gray, the president of the Board of Regents’s system, nor Nicholas Donofrio, the chairman of the board, took questions after the meeting. Donofrio conducted the meeting by telephone and was not at the Regents’ offices in Hartford.

Gov. Dannel P. Malloy, a political ally of Williams, told reporters later Friday that he had not made a recommendation: “I was not part of the process in any way.”

There evidently was no doubt that the recommendation of the search committee would be accepted: A press release was available immediately after the vote with the reactions of Gray, Donofrio and the three new presidents.

“Dr. Drummer brings an exceptional portfolio of scholarship and experience and to her new position, and impressed everyone involved in the search process with her seasoned leadership, imaginative ideas and high energy,” Gray said in the statement.

Drummer was one of three candidates to visit the campus and meet with faculty and students as part of the search process.

She now holds the dual positions of executive director of college advancement and the director of the Educational Foundation at Oakton Community College in Illinois.

Drummer is a graduate of Wittenberg University and has an M.A. and Ph.D. from the State University of New York at Stony Brook. Her dissertation was a study of the English writer, Virginia Woolf, but she Drummer comes to academia with an expertise in marketing and communications.

She began her professional career as a communications and advertising executive at Nabisco. She later held communication jobs at Baruch College, the New York Public Library system, and Carthage College in Kenosha, Wisconsin.

Quinebaug is one of a dozen community colleges in the recently merged Regents’ system, which includes the four universities of the Connecticut State University system and Charter Oak, an online college.

The system is overseen by a board appointed by the governor and legislative leaders, plus two students chosen by their peers. Its members include former House Speaker Richard J. Balducci and Naomi K. Cohen, the former House chairwoman of the Education Committee.

Lombella, the new president of Asnuntuck in Enfield, began his career as founder of a retail and service company. He was an operations manager at Plastipak Packaging Company and the Campbell Soup division of Pepperidge Farm.

Since 2009, Lombella has had various roles at Asnuntuck, associate dean of workforce development and chief financial officer. He also is an adjunct faculty member at the school’s Advanced Manufacturing Technology Center.

He is a graduate of Holyoke Community College and has a master of management degree from Cambridge College in Cambridge, Mass. He is pursuing a doctorate of education at Nova Southeastern University,

Jukoski, the new president of Three Rivers in Norwich, has spent her career in academia, including posts at Empire State College in Saratoga Springs, N.Y., World University-Miami in Florida, the University of Memphis, and Loretto Heights College in Denver.

In Connecticut, she was the dean of continuing education at Sacred Heart University in Fairfield and president of Mitchell College in New London.

Jukoski is a graduate of the College of St. Rose in Albany, N.Y., where she earned a B.A. and M.S. She also has a doctorate of education from the University of Memphis.