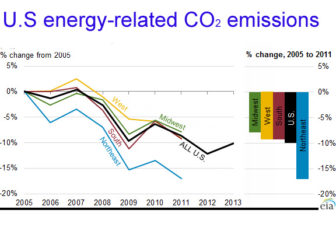 The Northeast has shown the nation’s largest decline in carbon dioxide emissions.

Washington – While lawmakers from coal-producing states – especially politically vulnerable Democrats – are wringing their hands over President Obama’s decision to force a decrease in greenhouse gases produced by the nation’s power plants, Connecticut lawmakers are shrugging off the proposal or voicing support.

That’s because it has little political impact in New England, and especially Connecticut, which are on their way to exceeding the new standard and even surpassing the Environmental Protection Agency’s new goal of cutting carbon pollution from power plants 30 percent from 2005 levels by 2030.

A report by the U.S. Energy Information Administration released Tuesday said the Northeastern United States has experienced the deepest decline in greenhouse gases since 2005. Connecticut has cut it’s emissions by at least  34 percent since 2005, the EIA said.

“The Northeast includes the top-three lowest emitting states per unit of economic output (New York, Connecticut, and Massachusetts) and two of the top-five states with the cleanest electricity sources (Vermont and New Hampshire),” the report said.

That’s because the Northeast is densely populated, which one would think would translate into more energy consumption. But the EIA said extensive urbanization translates into denser, more energy-efficient population centers and the Northeast has increasingly generated electricity from natural gas, nuclear, and renewables, instead of coal.

“The Bridgeport station is the only coal-powered plant left in the state,” said EIA statistician Tyson Brown.

According to the EIA, Connecticut ranked 49 out of the 50 states and District of Columbia in the amount of electricity used per capita, about 207 million BTUs a year. Only residents of New York and Rhode Island used less electricity and those in Wyoming, Louisiana and Alaska used the most.

That tactic proved effective in 2010, after then-House Majority Leader Nancy Pelosi forced Democrats to vote for a cap-and-trade bill aimed at lowering power plant emissions even though the legislation had little chance of Senate approval.

Democrats lost seats in the 2010 elections – some of them blaming their cap- and- trade vote—and the GOP won control of the House.

Esty, who has the most competitive congressional race in Connecticut, said she was supportive of the Obama administration’s plan, but withholding final judgment pending review.

“We just can’t afford to ignore the dangers of climate change and the consequences of our nation’s dependency on dirty fossil fuels,” Esty said in a statement. “I applaud President Obama for moving forward on a national policy to protect our health and our environment, and I’m looking forward to closely reviewing (Monday’s ) proposal.”

“I applaud the administration on this bold plan to protect our planet and the health of this generation and those to come,” Himes said. “We simply can’t stand idly by while harmful carbon emissions continue to threaten the health and economic well-being of Connecticut’s residents.”

The new rules are the biggest step McCarthy, who once headed Connecticut’s environmental protection agency, has taken since she became EPA chief last year.

“Whoever said the sword isn’t mightier than the pen, well they are completely right,” McCarthy said on Monday after she signed a document on top of a stack of papers explaining the new rules.

Those will not solve all of the nation’s emission problems and are not as ambitious as some environmental groups had hoped. But they will help put the country on course to achieve cuts on a scale required to meet the internationally agreed limit on global warming.

That led the U.S. Chamber of Commerce to warn that U.S. electricity costs could increase by $289 billion by 2030.

The EPA did its own accounting and found costs will be dwarfed by the benefits, which total $90 billion by 2030, $7 billion of that in health benefits.