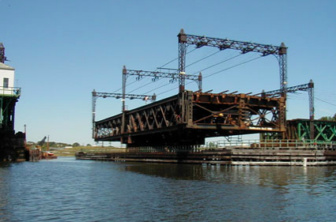 But the Connecticut Department of Transportation contradicted the statement hours later, saying the state was continuing to study the best approach to handling a bridge that became stuck in the open position twice in recent weeks, disrupting the busy New Haven rail line. According to ConnDOT, the bridge would not necessarily remain in the closed position.

“Any openings of the bridge for marine traffic will be done using a manual method to ensure that everything works properly,” said Judd Everhart, a DOT spokesman.

Blumenthal’s announcement, which was based on a written advisory from the Coast Guard that called the bridge “inoperable,” caught the DOT and the Malloy administration by surprise on two counts: It broke the news of a state bridge closing and suggested that the DOT had settled on short-term repairs to fix a 118-year-old bridge slated for replacement.

“Connecticut is working with the Coast Guard and Metro-North Railroad to coordinate the best approach to short- and long-term repairs to the Walk railroad bridge in Norwalk,” Everhart said. “We have assembled a team to come up with design plans for short-term repairs within 30 days.”

The Coast Guard made the decision to interrupt the relatively little-used marine route in favor of ensuring that the bridge does not again become stuck in the open position, cutting a busy railway used by 140 trains daily between New Haven and New York City, Blumenthal had said in an emailed statement. 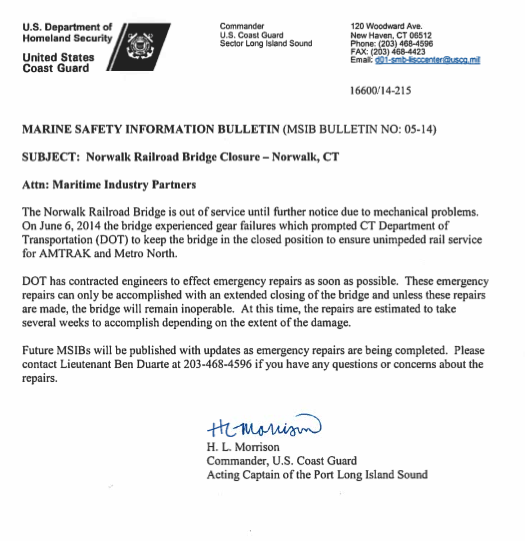 Blumenthal based his announcement on this notice.

The announcement was unexpected, given that the Malloy administration had expressed doubt that it was feasible to indefinitely block marine traffic. The Coast Guard already had exempted the state from a requirement to open the bridge on demand for all marine traffic, keeping the bridge available to commuter trains during the morning and evening rush hours.

“We are currently in conversation with the Coast Guard about what this announcement means,” Andrew Doba, a spokesman for Gov. Dannel P. Malloy, said earlier Thursday. Doba said he believes the bridge was not scheduled to open again until Saturday.

The DOT says the bridge was opened once since the last malfunction: It was manually opened and closed on Sunday, June 8. The same method will be used for the foreseeable future.

“The U.S. Coast Guard action is both responsible and responsive.  Until ConnDOT’s emergency repairs can be completed, we cannot risk stranding thousands of commuters and severely impeding commerce in the tri-state region,” Blumenthal said.

Connecticut is seeking $349 million in federal funds to replace the bridge, a multi-year undertaking. The state would contribute $116 million.

“I will continue to work with the Connecticut delegation to call for expedited consideration of the state’s request for $349 million in federal aid,” Blumenthal said. “A long term solution– replacement and not merely repair of this century-old bridge—is needed.”

On that, the DOT and Blumenthal are agreed.

The governor previously has said the DOT, which already was designing a new bridge, was conducting an assessment of short-term repairs to make the bridge more reliable.

The bridge is opened on average about five times a week, primarily to accommodate commercial barge traffic serving a business up river.