Raising Connecticut’s kindergarten age — a help or a harm? 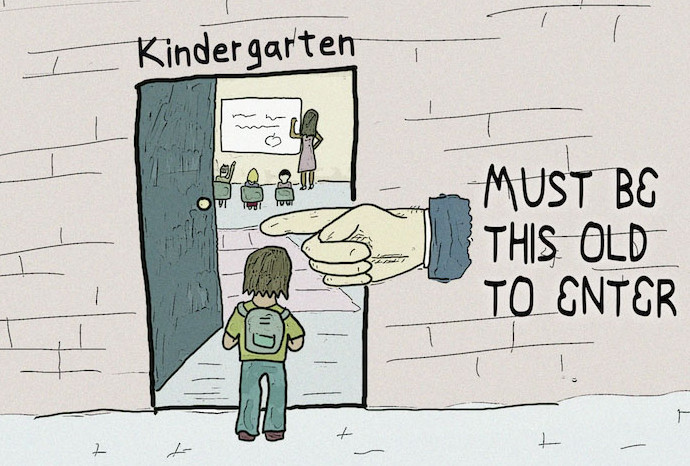 State Rep. Michelle Cook, D-Torrington, tells a familiar story — of one child who started kindergarten in Connecticut as the youngest in the class, and another who started as one of the eldest.

The two children are her own, and to some degree they fit a stereotype: the daughter started kindergarten at 4 years old, turning 5 the next January. The son started kindergarten at 5 but turned 6 in December. Cook struggled with the question other Connecticut parents have long had to answer: should they start their children early, or hold them back?

That question has been pressing on the legislature since the education commissioner in 2010, Mark McQuillan, called Connecticut’s wide age range in kindergarten “bad policy.” Educational leaders said McQuillan’s proposal to change the age requirement would allow a uniform age for kindergartners, which purportedly would help close the state’s growing achievement gap.

A year later, Gov. Dannel Malloy told the CT Mirror that the state should move to increase the age without waiting until it could afford expanded pre-school for low-income students. “I think we should be setting the age based on what we know about the likelihood of success, or increased opportunities for success,” he said then.

The same proposal has resurfaced each year since then. This year, when the state legislature gave the Office of Early Childhood a mandate to devise by June 2015 a plan to change the age Connecticut’s children may start kindergarten, the news was portrayed as the one last giant step necessary before the change was cast in stone. By 2015, it looked as though Connecticut would go the way of most of the other states in the nation in requiring an earlier birth date. Connecticut’s change would require children be 5 years old by Oct. 1 of the year they enroll, rather than the following Jan. 1 that has been the state’s norm.

The move would have pleased Cook’s daughter, who advised her mother to avoid sending the family’s younger children to kindergarten at an early age. “I hated being the youngest in class,” the daughter admonished the mother.

But personal anecdotes conflict with numerous studies saying socioeconomic status and other factors outweigh age in determining success in school. The age a child starts kindergarten has nothing to do with his or her long-term academic success, those studies say.

This year, despite the optimistic aura surrounding the proposed legislation, legislators and child advocates say a kindergarten age change is far from a done deal. Many say they will only support it if the state guarantees universal access to preschool, giving children exposure to a learning environment before they take on the challenges of a modern kindergarten classroom.

Which begs the question: can the state afford to pay for all the preschool initiatives to which it has committed while directing thousands more children toward preschool by raising the minimum kindergarten age?

“The need is much greater than the resources,” said state Rep. Roberta Willis, D-Lakeville, a chair of the higher education committee. “Quite frankly, the financial picture of the state will be a big part of the discussion. If we are as fiscally challenged as they say we are, I think that is going to be a major hurdle for us to get over.”

“If we are as fiscally challenged as they say we are, I think that is going to be a major hurdle for us to get over.”
Rep. Roberta Willis
D-Lakeville

The ‘they’ Willis refers to is the Office of Fiscal Analysis, a non-partisan government agency that has forecast that the state will face a deficit of about $1.4 billion for the first new budget after the November election, if it continues its current spending.

No matter who is chosen to sit in the governor’s seat in the upcoming election, all of the major-party candidates have resorted to either swearing off tax hikes or pledging tax cuts, boding poorly for any new initiatives.

Money is one stumbling block. Whether the change is actually useful is another. Some child advocates say changing the age will do next to nothing except shut tight an early educational doorway for thousands of children — many low-income — without providing good options.

“Studies do not show children not yet 5 do any worse academically — it’s urban legend — and that the biggest predictors of school success are socioeconomic status, maternal status, and whether that child had a preschool experience,” said Cyd Oppenheimer, a senior policy fellow at Connecticut Voices for Children. “We don’t actually have this big age range in kindergarten; 16 months is the standard cluster. It doesn’t solve the age range, so what does it do? And if it doesn’t do anything, why change the date? Then you have to find additional money for preschool. It doesn’t seem to be wise policy.”

For Andy Fleischmann, D-West Hartford, co-chairman of the legislature’s education committee, the change can only come with a caveat.

“Personally, I want to see a proposal that changes the kindergarten start age fully when we have full universal access to preschool,” he said. “If, for instance, through some change in the budgetary and political outlook next year the state backs away from universal access to preschool, I will oppose efforts to change the kindergarten start age, because for me and other legislators I’ve spoken to, it’s better to have a child who is a little bit young in a kindergarten classroom than to have that child shut out of a formal educational setting.”

There are two programs in particular — one brand new — that will add thousands of slots for low-income preschoolers. One, School Readiness, is a grant program that provides spaces for 3-and-4 year olds in accredited pre-kindergarten programs. It shares the cost among state agencies, municipalities, and families. Last year, 1,000 slots were allocated, and this year, more than 1,000. The program calls for a total of 4,000 slots for low-income children, phased in over five years.

The second, which the legislature passed this spring, is Connecticut Smart Start. The legislation committed $200 million over 10 years to pre-kindergarten programs for 50,000 3-and 4-year-olds.  Requiring high standards, the program addresses concerns regarding many so-called preschool programs that are actually child-care centers without an educational component. Bonding would pay for the capital expenses associated with the program, and the Tobacco Trust Fund would pay for operations.

Michelle Cook’s daughter might not have liked some of the implications of being the youngest in her class. (Her mother said she wasn’t able to get her driver’s license until junior year of high school, and couldn’t sign off on medical care in freshman year of college because she was still just 17.) But just the same, she bears out the results of many studies that say socioeconomic status, rather than age, makes the difference. An adult now, Cook says “she is thriving.”

The future of the kindergarten age change proposal that was expected in June 2015 is less certain.

“The plan from the Office of Early Childhood will come back through the education committee, we have to have a public hearing on it, and the subject deserves a good, solid look at all the data,” Cook says. “We have to take into consideration what other states have done and what their achievement gaps look like and ask ‘is this a direction we should go?”And we have to give the public the ability to have a conversation about it.”