At HQ opening, McKinney claims momentum and an omen 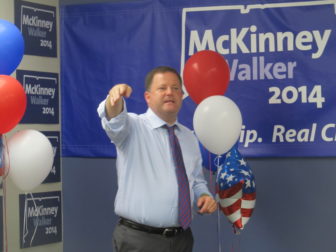 Fairfield – At the opening of his campaign headquarters, John P. McKinney grinned at the sight of the Rev. Bill Sangiovanni and an object the priest had recently unearthed, a relic of a long ago crusade.

“It’s a sign,” Sangiovani said of the timing of his discovery, not entirely playfully. To onlookers, he lowered his voice and explained, “It’s from the first one. It’s from 1970.”

It was a framed black-and-white campaign photo, a family portrait taken during Stewart B. McKinney’s first campaign for Congress. There was Stewart and Lucie and the five kids, three girls and two boys, the youngest being six-year-old John.

McKinney carefully placed the photo on a wall. As a poll-certified underdog, his campaign needs omens, luck, faith, mojo, karma – anything. And a found photo of a family political triumph presented to him by a priest couldn’t hurt.

There was no public poll to contradict him, and McKinney has had perhaps the best week of his yearlong campaign.

McKinney says the first of two televised debates with Tom Foley, his rival for the GOP nomination, and his first two television ads are finally drawing the attention of voters, a contest that has long been static.

Few would challenge McKinney’s assertion that he outperformed Foley at last week’s debate. By design, Foley said nothing memorable, confident the nomination is his, barring a major gaffe. It’s hard to see how the next budget will be balanced without tax increases or spending cuts, but Foley insists he can get by with no new taxes, no spending cuts and no demands for employee concessions. 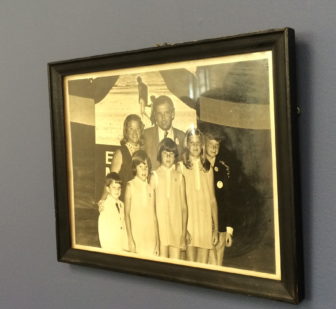 The candidate is the 6-year-old at left.

McKinney is using what Foley has given him: On the campaign trail, in conversations with some of the fellow state legislators uneasy with the thought of a diffident Foley at the top of the ticket, McKinney is stoking doubts about Foley’s ability to compete with Gov. Dannel P. Malloy.

“I don’t think Republicans are going to be able to beat Dan Malloy by being vague and defensive,” McKinney said. “Just saying, ‘I’m not Dan Malloy,’ I don’t think is enough to win the election.”

Foley, the 2010 nominee, insists he is not taking the GOP primary for granted, but he also acknowledges that his major focus is positioning himself for a rematch with the first-term Democratic governor. For now, that has meant a cautious approach to campaigning by Foley, which might have created an opening for McKinney.

On May 9, the date of the last Quinnipiac University poll, McKinney was running a distant third in a six-candidate field for the GOP nomination. Foley led with 39 percent, followed by Danbury Mayor Mark Boughton at 9 percent and McKinney at 8 percent.

Hampered by a lack of funds – he and his running mate, David M. Walker, finally qualified for public financing last week – McKinney was unable to open his headquarters in his hometown of Fairfield until Tuesday, exactly three weeks before the Aug. 12 primary.

If nothing else, McKinney has persevered. He is now Foley’s only rival for the nomination, finding comfort in the volatility of low-turnout primaries and the experience of the man he wants to unseat

In 2010, Malloy never led in any poll until after the Democratic primary. He trailed Ned Lamont by 9 points a month before the primary. A week out, Lamont still led by 5 points.

“I think this is one of those summer surprises,” said Joseph McGee, one of Stewart McKinney’s original congressional staff members and a friend to the son. “My suspicion is his base is more motivated to vote.” 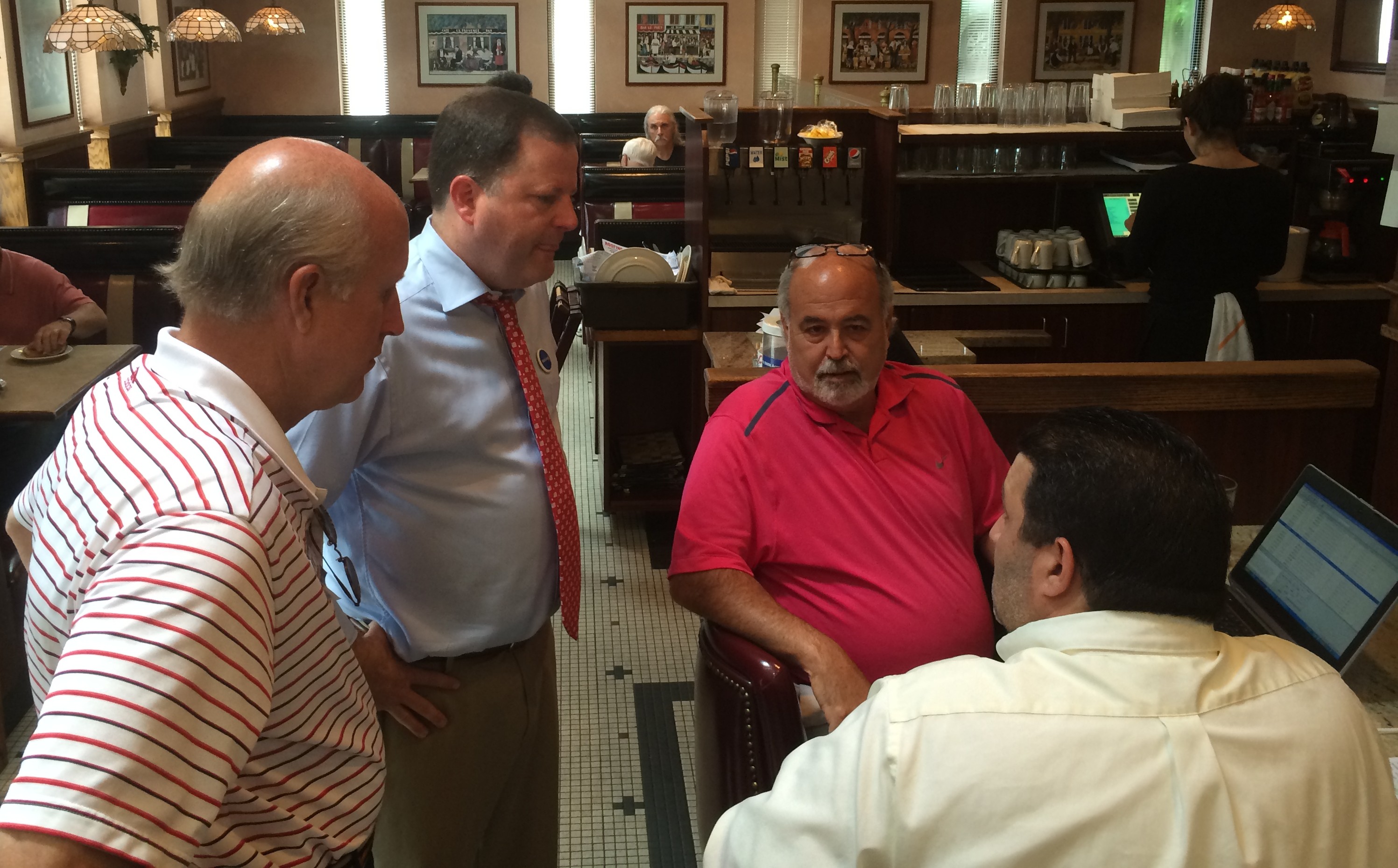 McKinney has represented Fairfield and the rest of the 28th Senate District in the General Assembly for 16 years, the last seven as leader of the GOP minority in the Senate.

His friends, including Sangiovanni, say McKinney is better positioned to get out the vote on Aug. 12.

That is a hard-to-test assertion. The efficacy of get-out-the-vote machines are hard to measure until it’s time to get out the vote.

The GOP establishment is with Foley. The previous night, New Jersey Gov. Chris Christie, the chairman of the Republican Governors Association, campaigned with Foley and headlined a party fundraiser in Greenwich at Foley’s request.

McKinney shrugged off the incursion into Connecticut by Christie.

“Tom Foley is raising a lot of money for the Republicans Governors Association. Chris Christie is head of the Republican Governors Association. I don’t know if that has anything to do with it, but it’s disappointing that my own state party is actively working on behalf of a candidate in the primary. But I think there are a lot of Republicans who aren’t going to vote and don’t vote based on what their state party chairman wants. That’s not going to stop us,” McKinney said.

McKinney said all the Republican support he’ll need for November will be available to him if he wins the primary.

“I’m sure the state party is going to work very hard for me, starting Aug. 13,” he said.

At his headquarters opening, McKinney and Walker thanked the dozens of friends and supporters who crowded into the office space.

His father’s last campaign in 1986 was run out of the same building. But McKinney’s friends, like Sangiovanni, thought more Tuesday of the father’s first campaign for Congress, not the last.

McKinney often wears a blue-and-white McKinney button from his father’s first campaign, a gift from a delegate to the GOP convention. It has been a talisman, a good-luck charm.

“I admit, I think about my mom and dad every day I’m on the campaign trail,” McKinney said.

His father died in 1987 of complications from AIDS. His mother became an AIDS activist.

During the debate last week, he and Foley were asked to name their heroes. Foley mentioned Ronald Reagan. McKinney named his parents, as he does during his stump speech.

“I always tell them my mom and dad were my heroes. I didn’t need to look outside my house,” McKinney said. “I was lucky. It’s always been a big part of me.

McKinney, who is divorced, was accompanied Tuesday by his fiancée, Kristen Fox, and his three children.

McGee and Sangiovanni, whom he considers big brothers, bantered with each other. McGee teased about beating Sangiovanni in a boxing match that the priest professed not to remember.

Sangiovanni, the president of Notre Dame Catholic High School in Fairfield, officiated in May at the funeral of McKinney’s mother, Lucie. He performed the weddings of Stew and Lucie’s children and baptized their grandchildren.

But the black-and-white photo he gave to McKinney on Tuesday was in his files, which were in storage after Sandy flooded his home, for another reason.

In 1970, Sangiovanni wasn’t yet a priest. He was Stew McKinney’s campaign manager.