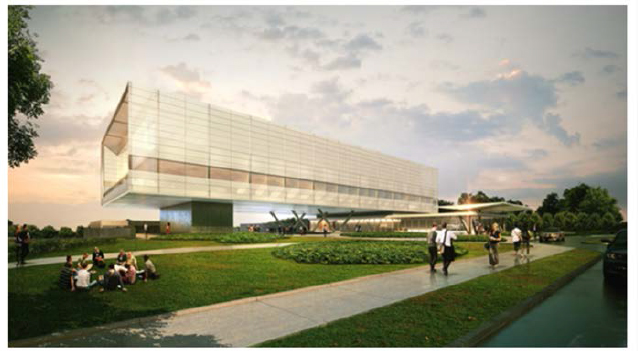 An artist’s rendering of the $162 million innovation center proposed on UConn’s main campus in Storrs.

The University of Connecticut Board of Trustees Tuesday unanimously endorsed plans for a new multi-story research building, a large housing complex for science, engineering and math students and a 3,400-foot road extension to link the Storrs campus’s technology park with Route 44.

“Today is really the culmination of all the planning all the work around scientific progress at the university,” UConn President Susan Herbst said.

Science, engineering and medicine are the most expensive fields to invest in because of the highly specialized research equipment they need, she added. “But the big picture is that UConn has to boost its research performance,” Herbst said. “There’s no other way to get ahead.”

These projects either are part of, or a key complement to Next Generation Connecticut, an ambitious 10-year, $1.5 billion expansion plan to develop UConn into a pre-eminent research university and innovation hub.

One key capital component of Next Gen involves $162.3 million for what officials have dubbed an “innovation partnership building.” It involves 112,000 square feet in a new, multi-story research building to house cooperative research efforts between UConn students and faculty and private businesses.

That project goes out to bid in October.

Another $105 million in bonding was endorsed Wednesday to construct a major new dormitory, with 210,000 square feet and 730 beds, for science, engineering and math students. It is scheduled to open in the fall of 2016.

The right-hand structure is an artist’s rendering of the proposed new STEM residence hall on the Storrs campus.

The trustees also approved a final budget of $20.4 million to extend North Hillside Road in the north section of the Storrs campus by 3,400 feet. This would link that road, and the university’s technology park, with Route 44. The project also involves related gas, electric, water and sewer improvements.

The road extension is scheduled to open in November 2015 with all road work being completed by the fall of 2016.

In other business Wednesday, the trustees also approved several other capital project or project budget changes not linked directly to Next Gen, including: