New Britain – By turns wistful and upbeat, Gov. Dannel P. Malloy and Education Commissioner Stefan Pryor put a positive spin Thursday on Pryor’s announcement he will leave the Malloy administration, a departure sought by unions important to the governor’s re-election.

But as the governor was denying placing pressure on Pryor to leave, his administration was preparing another announcement guaranteed to further please the state’s two major teachers’ unions, the Connecticut Education Association and AFT-Connecticut. He was naming an AFT officer to the State Board of Education.

That appointment was not revealed at his press conference at a middle school in New Britain to celebrate a commitment of $132.9 million to struggling schools. There, Malloy and Pryor shared a stage for the first time since Pryor’s announcement he was seeking a new job and would not seek reappointment to a second term should Malloy be re-elected.

In the audience was at least one union leader who pushed Malloy to make the change.

Pryor, a lawyer who is a co-founder of the Amistad Academy, the flagship of the Achievement First network of charter schools, was praised by Malloy and even embraced by Melodie Peters, the president of AFT-Connecticut, who acknowledged she had first suggested a year ago to the governor that Pryor’s presence as the face of education reform was a political detriment.

By late afternoon, Malloy had made another gesture of conciliation to teachers by naming Erin B. Benham of Wallingford to the school board. She is a middle-school teacher, an AFT-Connecticut officer and the president of an AFT affiliate, the Meriden Federation of Teachers. She replaces Andrea Comer, who had been an executive at a charter school, a sore point to the teachers’ unions.

Malloy also named Maria Isabel Mojica of Hamden to the board. Now a consultant to non-profits, she is a former executive at the Hartford Foundation for Public Giving and the William Caspar Graustein Memorial Fund.

Benham’s appointment was quickly praised by Peters and Sheila Cohen, the president of the CEA.

“Teachers need to be at the center, not the periphery, of setting policy and planning implementation,” Cohen said.

“We expect Erin to ensure that the voices of educators are heard and respected, and to play a role in helping to shape policy in all our state’s schools,” Peters said.

In New Britian, Malloy, who has been endorsed for re-election by AFT, told reporters he did not seek Pryor’s departure.

“I appear alongside my friend today. Let there be no doubt about that,” Malloy said.

Malloy feigned surprise when a reporter asked if Pryor had become a lightning rod for those who objected to his administration’s implementation of the Common Core curriculum standards or reforms in teacher evaluations.

The press conference seemed intended as a counter to Republican gubernatorial candidate Tom Foley’s criticism that the Malloy administration has imposed new mandates on all schools districts, rather than concentrate on low-performing schools. 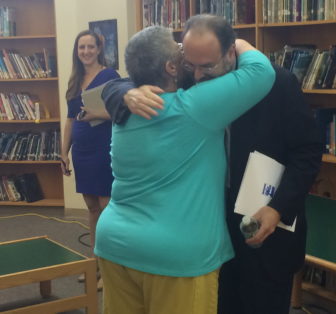 In return for the extra money, the Alliance District program requires annual updates of its “turnaround plan.”

Malloy suggested that Pryor, as a reformer, inevitably would be a target.

“Stefan’s done great work,” said Malloy, who cast the length of Pryor’s tenure as commissioner as above the norm. “The average tenure of an non-elected superintendent or commissioner of education is less than 2½ years in this country.”

Pryor struck a valedictory note in his remarks.

“I am very proud of the body of work that we’ve done,” Pryor said. “And sometimes when you look at a transition point — and a change in term is such a point — it makes sense to pursue other opportunities, to know that the contribution you’ve made is the right one and that you wish to go on and make other contributions in your professional life. I maintain a superb relationship with this governor.”

Peters shared a few words with Pryor after the press conference concluded, then hugged him.

Malloy posed with New Britain administrators, teachers and a school board member. Peters joined them for a group picture.

Pryor watched from the side.