Report: DCF must do better at tracking kids who ‘age out’ 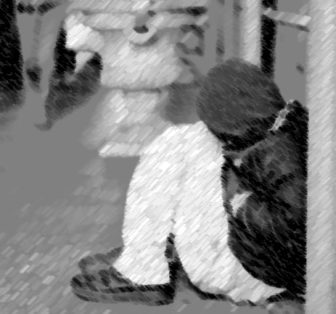 Alixes Rosado stopped speaking to his family when his mother threw him out of the family home in New Britain. He was 12.

After sleeping in streets, parks, and alleys for some months, he called a social worker he knew from the state Department of Children and Families, who found him a safe place to stay.

Almost annually after his first placement, Rosado moved from one home to another, finally aging out of state care at 23 with a child of his own. His parents were not there to guide him, nor did he have brothers or sisters to support or encourage him.

The number of children in state care who age out without family connections is mostly unknown to the Department of Children and Families, which was criticized for its lack of data collection in a report issued on Feb. 6   of this year by the bipartisan Legislative Program Review and Investigations Committee. The committee acts as a government efficiency expert, reporting on the efficacy of numerous state programs and the agencies that administrate them.

The risks posed by losing track of children formerly cared for by DCF are significant. One of the concerns for child advocates, as well as DCF, is that children may become homeless if they age out at 18 without an education and family connections.  With homelessness comes a raft of other issues: depression, drug and alcohol addiction, suicide.

Housing is expensive in Connecticut, and the report cited studies that found a high rate of homelessness throughout the United States among youths formerly cared for by state agencies. Nationally, many young people who age out of state care reported being homeless at least once.

“We need to set up a support structure for wards of the state,” said State Rep. Mary Mushinsky, D-Wallingford. “These kids, through no fault of their own, are left without a support structure for whatever reason — parents who died, or couldn’t handle parenting — and the state system for taking care of them has to parallel the parent support in a parent-led household. Somebody has to check on them.”

The committee took DCF to task for failing to provide adequate data to the federal government through the National Youth in Transition Database. The federal database initiative requires states to collect information tracking the independent living services states are providing to youth in their care and to report outcomes for those youth. The initiative requires states to collect information from at least 80 percent of youths in foster care and 60 percent of young people who have left care, admittedly a challenge when the children are no longer in state care and are often difficult to find.

Although Rosado faced numerous challenges over the years he was in state care, he stayed in school and out of trouble. He also moved into an independent living situation overseen by DCF when he was 16, in a house with four apartments, two young men to an apartment.

“I was ready for it,” Rosado said. “I stayed there for two years and did extremely well.”

A consistently strong student, he took advantage of DCF programs enabling him to further his education and graduated from the University of New Haven with a degree in criminal justice. But he still yearned for one thing: a family of his own.

“I was going to college, I was becoming a man, and the only thing left was having a family,” he said. “That is a mental struggle shared by a lot of DCF kids. I ended up making mine and it ended up being only two people, but it’s my everything.”

Rosado had one relationship the DCF hopes to achieve with other young people aging out of state care: an adult who cared for him. She was his DCF social worker when he was 14, kept in touch, took him in when he needed a place to live right before college, and now is his daughter’s godmother.

“She is my family,” he said. “Her whole family is the only family my daughter has ever known.”

The Program Review and Investigations Committee began collecting information for its report in June 2013, two years after then-Associate Justice of the state Supreme Court Joette Katz took over the troubled agency. 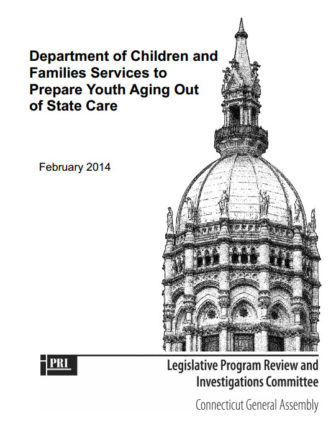 In the report’s introduction, the committee wrote: “An overall assessment about how well DCF is preparing youth who age out of DCF care is not possible, and is hindered significantly by a lack of quality aggregate information on program activities and measures, and individual youth outcomes.”

It did delineate the numerous programs created since DCF came under Katz’s direction, and also programs initiated in the year since the Program Review and Investigations Committee began its study. In that time, the agency has made a number of improvements and changes to the way it tracks children leaving its care, and the programs it offers to prepare those departing children for independent lives.

The department says it has a renewed commitment to accountability, information collection, and working with other state agencies to better serve children under DCF care.

“I think as an agency we are becoming more self-evaluative,” said Linda Dixon, the administrator over adolescent and juvenile justice services. “I think our whole agency is moving toward more accountability. There’s a lot of culture change here; we’re learning how to track our data more and use it to inform our programming.”

This is what the department does know: that in fiscal year 2013, 79 children left the care of DCF at age 18 without participating in any secondary programs. Of that number, it is unknown how many lacked family connections. 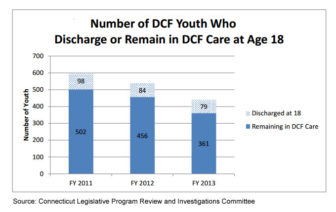 From January through May of this year, the department collected data on individuals 18 and older who transferred to adult agencies from DCF care. Of 57 individuals, 38 did not require adult services. Of the 19 who did, all of them were referred to the state Department of Developmental Services or the Department of Mental Health and Addiction Services.

In fiscal year 2012, 30 percent of youth leaving DCF care were planning to reside with relatives, up from 22 percent the year before, according to Ken Mysogland, director of foster care and adoptive services. “We have policies to help youth in that transition,” he said. “We call that ‘the walk home’.”

The Program Review and Investigations Committee report was clear about where the responsibility lies: “These youth may cross several jurisdictions and service delivery systems such as child welfare, education, juvenile justice, and behavioral health. Therefore, DCF should not be considered alone in its responsibilities,” it said.

“Our message really is to have DCF work with other agencies to stand behind these young adults, sharing information,” Mushinsky said. “It pays off in the end. A healthy, career-trained young adult is an asset to the community.”

Dixon at DCF says the agency has made significant strides in changing the culture. “We have been working really hard to partner with our sister agencies,” she said, citing regular meetings to share information with the departments of Social Services, Housing, Mental Health and Addiction Services, and Developmental Services.

Working toward a happy ending

Rosado is an example of what DCF would like to see happen with children who age out of state care. At 25, he is stable, works several jobs, takes his responsibilitiesto his daughter seriously, and has a strong relationship with an adult who provides family structure. Another plus: he keeps in touch with DCF, which aids accountability and statistical analysis.

Rosado lives in Manchester now with his daughter, who is 7. He works with child advocacy groups and others trying to get the word out about what DCF has to offer, speaks at conferences on child advocacy, drives an ice cream truck, and does private security while continuing to look for a job in criminal justice.

He is determined to give his daughter what he did not have, and he credits DCF with giving him the tools to do it.

“I’m still waiting for my education to pay off, but what the department has done is tremendous,” he said. “That is what inspires me to do the work I do. The department has so much to offer; kids don’t have to leave when they get to the age of 18. The streets are lonely and they’re cold. I know what the Department of Children and Families has done for me. They’ve made me into a man.”