GOP mayor gets taste of ‘candy’ denounced by Foley 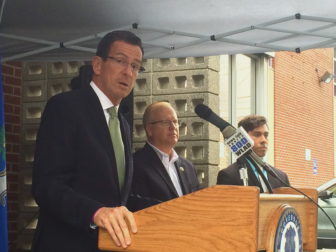 How nice? The GOP mayor and Democratic governor shared the spotlight Tuesday as Malloy announced the delivery of $3.8 million in state funds, a grant hurriedly arranged over the last eight weeks as part of a $5 million deal to purchase and renovate a closed YMCA into a multi-generational community center.

It’s the type of election-season largesse that Foley denounced the previous evening at a gubernatorial debate in West Hartford, where Foley said of Malloy: “He’s been handing out a lot of candy, promising a train station here and a library there.”

If that’s the case, Republicans are not immune to sweets.

On Monday, Malloy was in Waterford, pledging that 32 acres of state-owned waterfront property once designated for development would be forever preserved as a state park. Last week, he stood in Union Station in New Haven to announce an expansion of off-peak Metro-North train service.

The week before, it was funding to clean up brownfields in 11 communities. And the week before that, Malloy unveiled a new DMV photo license center in Stamford.

Boughton, who was Foley’s running mate in 2010 and attended a press conference last week when Foley announced his urban agenda, said he did not hesitate to accept an invitation to appear with the first-term Democrat who is facing Foley again in a rematch.

“Obviously, the governor has been traveling around the state having these kind of events. I get the context, the political context of it,” Boughton said as he waited for Malloy to arrive at the YMCA, a block off the city’s Main Street. “If you are going to lead the city, you’ve got to be here, regardless of what political thoughts you have or who you’re supporting for governor.”

In 2010, Malloy lost by 1,688 votes here in the general election, a significant number in a race won by just 6,404 votes out of 1.1 million cast. Democrats hope to trim that plurality without Boughton on the GOP ticket.

Malloy shrugged off Foley’s criticism that there just might be a political aspect to state funding of local projects. Boughton and two Republican legislators, David Scribner and Richard A. Smith, were quoted in the press release that went to the local press.

“He can say whatever he wants to say,” Malloy said of Foley. “I’ve been doing this for a long time. Good projects come along. This is an unbelievable opportunity, and it needed to be acted on. The property’s on the market.”

The local politics of the project are complicated. The Y competed with the nearby War Memorial, which also has workout facilities and a gym, but no pool.  The closing of the Y and its listing for sale took the community by surprise, especially a group of seniors who regularly used the pool.

Several of the displaced pool patrons attended the press conference, sitting on folding chairs in a light drizzle. They thanked the governor and mayor.

James H. Maloney, the former Democratic congressman who now runs a non-profit agency, the Connecticut Institute for Communities, reached out to Malloy two months ago about state support for converting the Y into a multi-use community center whose tenants would include a Boys & Girls Club.

Boughton suggested expanding the Head Start program into the building.

Malloy is greeted by Boughton, Maloney and Walkovich

Malloy told them the state would provide $3.8 million for the center, with some renovation money going to the War Memorial, on the condition that the community raise the remaining $1.2 million.

“Sometimes you have to strike while the iron is hot,” Malloy said. “They needed real evidence it could be pulled together, so it was time to act.”

If the Malloy-Boughton alliance was unexpected, so was the governor’s dealings with some of the local Democrats. The lobbyist for Maloney is Joe Walkovich, a former state legislator and the current Democratic town chairman. In 2010, Walkovich was part of a local faction that backed Ned Lamont over Malloy in the Democratic primary.

Now, they are allies.

Malloy, who was mayor of Stamford for 14 years, was asked about the politics of Boughton’s participation in the press conference announcing the deal.

“Let me put it this way: If I was the mayor and something as momentous as this was happening, I’d want to be there,” Malloy said.

Boughton said there was no contradiction.

“I’m supporting Tom Foley. I’ve made that eminently clear. I’m working for Tom Foley,” Boughton said. “But that’s not what today’s about. Today’s about helping the seniors, veterans and some kids.”