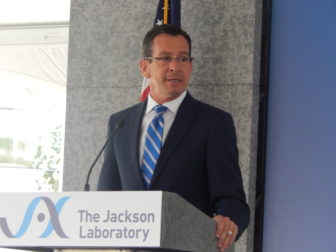 Gov. Dannel P. Malloy trumpeted one of his administration’s boldest investments Tuesday at the opening of a heavily subsidized genomic medicine research institute on the UConn Health Center campus in Farmington.

The nonprofit institute, operated by The Jackson Laboratory, has polarized Connecticut politics since October 2011, when Malloy and the Democrat-controlled legislature approved a hefty subsidy for the project over Republican objections. It is an issue in his re-election, with his Republican opponent, Tom Foley, deriding the state’s investment as exorbitant.

Malloy said he was confident the state was investing in the future.

“We invested in Bioscience Connecticut because we knew this emerging industry would pay immediate and long-term dividends for our state by positioning us as a global leader in personalized medicine and innovative research, attracting new business investment and creating good-paying jobs with good benefits for our residents,” Malloy said.  “The speed at which this project was completed and the great work that is already underway at JAX Genomic Medicine demonstrates that our investment is already paying off.”

The governor said the value of this public-private partnership far exceeds the boost it will give the state’s economy.

“This day is special,” Malloy said, praising “a new relationship that will make lives better, that will save lives.” 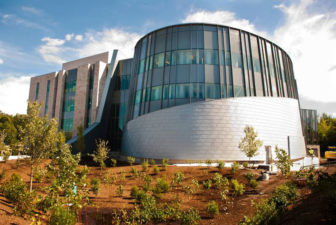 The Jackson Laboratory in Farmington.

“Genomic medicine represents the next great frontier in the quest to improve human health,” said Dr. Edison Liu, president and CEO of The Jackson Laboratory. “With this new facility, we are poised to play a leading role in opening up that frontier and bringing the benefits of scientific discovery into the lives of patients.”

“To the architects, the building team, the engineers who got this finished before Election Day, I want to thank you,” the governor quipped.

About six hours before Tuesday’s ceremony, Foley was denouncing the project before Hartford-area business leaders, calling the price tag too steep.

The state borrowed $291 million to cover all construction costs on the 173,000 square-foot institute, and to subsidize its operations for the first decade. The interest on that financing will cost the state another $120 million.

Over the same decade, The Jackson Laboratory will spend between $279 million and $290 million on its operations.

In exchange for the state’s more than $400-million investment, The Jackson Laboratory also is required to employ at least 300 people at the center within a decade. It currently employs 150 people, including 70 scientists with masters’ or doctorate degrees.

But the institute is the linchpin of a state-plan to develop a bioscience industry cluster at the health center campus.

And the Malloy administration insists it will create about 4,000 bioscience jobs alone, with the economic activity from this cluster sparking growth of another 2,000 jobs in other fields.

Still, Foley told the MetroHartford Alliance that the price for The Jackson Laboratory project was too high.

“A million dollars a job? Are you kidding me?” he told about 200 business leaders gathered at Capital Community College in Hartford. “It’s government largesse.”

The Greenwich businessman predicted that The Jackson Laboratory and other firms that have received big state aid under Malloy won’t add jobs beyond the minimum required unless the state’s business climate improves.

“Once the [state financial] incentives are gone, the jobs are going to go,” Foley said.