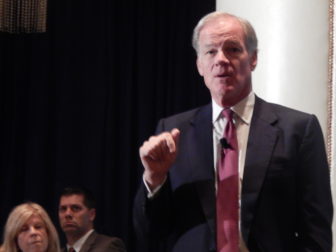 The fierce political rivals apparently agree on one topic, though it might not be the most pressing in the minds of voters: the ongoing conversion of state finances to Generally Accepted Accounting Principles.

Answering questions after a campaign appearance in Hartford, Foley said he wouldn’t support a return to the numerous accounting gimmicks that once created a $1 billion-plus hole in the state’s finances.

And while that position might seem like a no-brainer, consider this: If the governor next year – Foley or Malloy –were to abandon GAAP, an estimated $560 million borrowed last year to bolster the state’s cash flow instead could effectively be used to help close a major budget deficit.

“Honestly I support more transparency and accountability in government,” Foley told The Mirror following a discussion with Hartford-area business leaders at Capital Community College. “We can solve [the deficit] in ways that serve the public interest well. We don’t need that.”

In the context of the state budget, the conversion ended an array of accounting gimmicks that have pushed current expenses into future years and similarly used revenues received in one year to balance the books of the prior year.

Under GAAP standards, the state should have had about $1.2 billion more cash on hand when the conversion effort began.

Because of the GAAP differential, and a sluggish economic recovery, the cash flow dropped dangerously low between 2011 and 2013, forcing Treasurer Denise L. Nappier to dip temporarily into capital programs so the state could pay its bills promptly.

Malloy’s original plan to close that GAAP differential was to gradually save budget surpluses, amortizing the shortfall over time. But as surpluses failed to materialize, the governor and legislature – in a very controversial move – opted to borrow $560 million to chop the differential almost in half.

Those funds weren’t appropriated into the state budget to be spent. They only were applied to the cash pool to ensure the state could cover its bills.

But if Connecticut were to return to the fiscal gimmicks of the past, it could again build artificial savings into its budget – and the borrowed funds would ensure the cash pool would not dip too low.

That scenario might be tempting to some state officials, given that nonpartisan legislative analysts are projecting a $1.4 billion deficit in the next budget, a shortfall equal to about 7 percent of annual operating expenses.