Connecticut’s governor for the next four years will face a wide range of challenges to improve the state’s public schools. The Mirror spoke with both major party candidates about their approach to education. Today, Gov. Dannel P. Malloy talks about his track record and future plans. Wednesday, Republican challenger Tom Foley will lay out his vision for Connecticut schools. 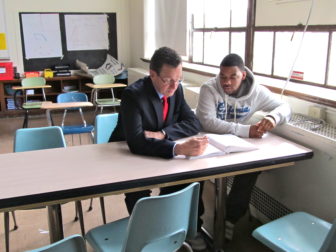 Gov. Malloy works with a student in a school in Norwalk earlier this year

Calling education reform the “civil rights issue of our time,” Gov. Dannel P. Malloy has intensified the state’s involvement in schools across the state during his four years in office.

During his second year, the governor’s bold attempt to change collective bargaining rights in the worst-performing schools and to overhaul how teachers earn and keep tenure drew hundreds of angry teachers to the state Capitol to protest. Now, however, with the furor subsiding, he points to the less dramatic changes he signed into law as the reason he deserves to be reelected.

“Let’s remember, I am running on a record,” he said.

Had the governor had his way in 2012, teachers would have been required to be evaluated every year and student test scores would play a role in their ratings. School leaders would then be able to use those ratings to make dismissal decisions, and poorly rated teachers could lose their tenure and be fired. The governor also wanted to limit the teachers’ unions ability to collectively bargain for the transfer of teachers from the worst-performing schools to different schools.

At the time, the leader of the state’s largest teachers union summarized the  governor’s bill as threatening to return the state “to the dark ages of labor history.”

Malloy’s controversial proposals were eventually scaled back after collaborating with Democratic legislators, and the governor signed a bi-partisan bill into law with the support of teachers’ unions.

Two years later, the governor is campaigning on all he has done to improve schools in Connecticut and says he is proud of the changes to law he prompted.

“I believe in the process,” he said last week. The changes are “the right road to be going down and I’m comfortable with that and I think people are increasingly becoming comfortable… I am happy with the progress that we have collectively made.”

Despite a massive budget deficit awaiting Malloy when he entered office in 2011, low-achieving schools throughout Connecticut have seen steady increases in state funding during his tenure.

Cities and towns are receiving almost $150 million more to cover their education expenses this year as compared to the 2010-11 fiscal year – an 8 percent increase over the last four years.

“The system that we have set up concentrates our expenditures on the 30 lowest performing districts. That makes a lot of sense and is producing results,” Malloy said.

While thankful for the increase in funding, local officials still contend the state is not spending enough for them to provide their students an adequate education. A coalition of municipal leaders, educators and parents are suing the state in an effort to force the lawmakers to spend more. That trial is set to begin on the eve of the next governor’s inauguration and the outcome of that case could shape how much the next administration must spend on education.

Asked if he plans to direct more money to education if re-elected, Malloy once again touted his record.

“I look forward to an improving environment where we can continue to have education not only as our top priority, but also a priority that we are able to stand behind and get more money to,” he said. “I have a goal to continue funding integration and higher achievement levels. That’s a course I want to stay and see actually become systemic.”

Malloy, the first Democratic governor in 20 years, routinely points to the thousands of children stuck in underperforming schools as justification for his hands-on approach.

His approach has been for the state to provide an additional three-year grant for up to 25 of the 200 lowest-achieving schools. This school year, the state will spend $16.5 million so those schools in this Commissioner’s Network can provide things like longer school days, bilingual programs and new computers.

He initially wanted to bypass legal challenges when teachers contested certain changes at these schools. Although he wanted to have teachers in the worst-performing reapply for their jobs and give school leaders the option to retain only the best ones, Democratic legislators maintained teachers’ rights in these schools in the bill they approved.

Instead, a “turnaround committee” — half appointed by the teachers’ union and the other half by school officials — developed the changes for these schools.

The governor said he is proud of this compromise.

Malloy was noncommittal on whether he would find the money in future state budgets to continue the growth of school choice in Connecticut.

“Adding options is something that I believe that we should work with districts on. I think that districts should play a lead role in doing that, and I think a lot of that will depend on where we are budgetarily. Are the numbers there when we are putting the budget together,” he said.