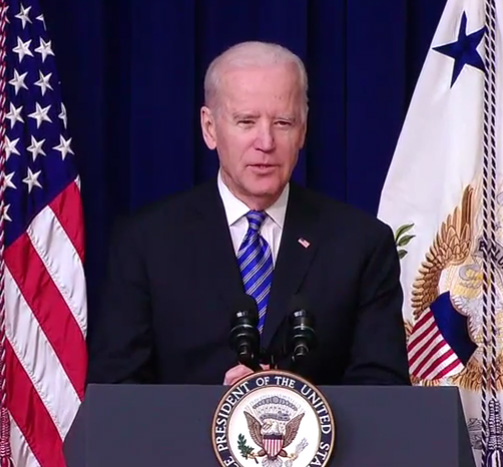 Washington – Five Connecticut teenagers were among dozens of children in foster care invited to Washington this week to attend a White House event entitled “Improving Outcomes for Our Nation’s Foster Youth.”

The children listened to inspirational talks by White House and Obama administration officials who grew up in foster homes, including Secretary of Agriculture Tom Vilsack.

The event was an effort by the Obama administration to press for better foster programs.

“We have to do a better job looking out for you,” said Vice President Joe Biden.

The highlight of the event may have been viewing the new movie “Annie” and meeting its stars, including Jamie Foxx, Cameron Diaz and Quvenzhane Wallis, who plays the spunky orphan named Annie.

Ashley Chevrett, 18, a Southern Connecticut State University freshman who is still under the care of the Connecticut Department of Children and Families, gave the film a mixed review.

“The movie is pure Hollywood. It’s not realistic. But it sends a beautiful message,” she said. “I know no rich guy is going to swoop down and adopt me.”

Chevrett has been in foster care since she was 8 and has not seen her mother in five years.

Joette Katz, commissioner of the Connecticut Department of Children & Families, accompanied Chevrette and four other foster youth from Connecticut to Washington.

“It was great for the kids to see (foster ) success stories,” Katz said.

She also said Biden singled out Connecticut for programs aimed at reuniting children with their parents and keeping others out of foster care.

Gov. Dannel P. Malloy plans to use federal grants to develop two new programs. One is the MOMS Partnership, which tries to tackle depression and other stresses among mothers at risk of having their children placed in foster care.

The other new program is “Caregiver Substance Use and Recovery Services,” developed in collaboration with the Harvard Kennedy School Social Impact Bond Lab. It would combat substance abuse in parents and provide support services.

For the second time this year, legislators will not address health equity reform during a special session.

To address these disparities, studies show, Connecticut needs to spend an additional $338 million to $1.7 billion more a year.

Has Connecticut safely reopened its schools? The state and its teachers disagree

A coalition of teacher's unions said there are “red flags" contradicting CT's assertion that school reopenings have been a success.