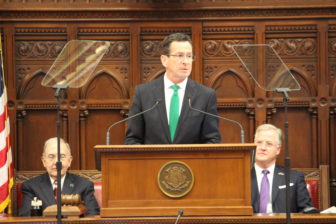 Malloy, who has pledged to unveil a major initiative next month to upgrade Connecticut’s aging transportation infrastructure, also will seek short-term measures to create a legal “lockbox” around transportation funds.

The constitutional amendment process is long, and an amendment would take at least two years to be ratified.

“We must make sure every penny we raise for transportation goes toward our vision to transform Connecticut – now and in the future,” Malloy wrote in a statement.

The Democratic governor’s new proposal appears to be a push for bipartisan unity on his transportation initiative.

Leaders of the Republican minorities in the Senate and House, Len Fasano of North Haven and Themis Klarides of Derby, both have said a constitutional amendment is the best place for a legal “lockbox.”

But both also warned that the Special Transportation Fund relies on revenues from many sources – fuel taxes, motor vehicle fees, and even general fund revenues. And any “lockbox” language that safeguards some sources – even new ones like toll receipts – while allowing others to be diverted for non-transportation purposes, would be ineffective.

“It can’t be this shell game of moving the money around,” Klarides said Wednesday after Malloy called for a lockbox in his State of the State Address.

Fasano said Friday, “I’m glad that the governor and I agree that a constitutional amendment ultimately is required for the sanctity of the Special Transportation Fund. And I look forward to working with the governor on the language.”

Democratic legislative leaders in both chambers had been wary of a constitutional amendment earlier this week, arguing that it could not be used as an excuse to defer investing in transportation for several more years.

“I appreciate the governor giving us more information so quickly on his transportation lockbox idea,” House Speaker J. Brendan Sharkey, D-Hamden, said Friday. “These are very interesting proposals. I’m supportive of the lockbox concept, and looking forward to further discussions when the legislature receives the full details.”

If a resolution passes each chamber with at least three-quarters of the votes cast, it then goes before voters for final ratification in the next statewide election – which is in November 2016.

If it passes in both chambers – but fails to secure the three-quarters’ margin in at least one – it must be reconsidered by the General Assembly in 2016.

If it then passes both chambers of the legislature for a second time – by any margin – it would go before voters on the November 2016 ballot.

Any amendment supported by even a bare majority of voters is deemed ratified.

The governor also said Friday that he also would propose a legal “lockbox” to be adopted this year in state law. This would provide some short-term protection for transportation funds until a constitutional amendment could be ratified.

A statute doesn’t offer the same protection as a constitutional amendment, since a statute can be repealed by a simple majority vote of the legislature.

The governor has also said he supports establishing a legal “lockbox” when Connecticut goes to Wall Street to borrow funds for transportation projects.

The state could pledge in its bond covenants – effectively contracts with the investors who buy its bonds – to use transportation revenues only for transportation purposes.