It has drawn a baker’s dozen of Connecticut mayors and selectmen this year; and this year, paramount on most of their agendas, is the search for opportunities to seek funds from Washington.

“I’m always trolling for grant opportunities,” said Danbury Mayor Mark Boughton, who is attending the conference for the first time.

In addition to scoping out possible federal funds, the six Republican and seven Democratic Connecticut mayors in Washington this week are exchanging ideas, both big and small, with hundreds of fellow mayors around the nation.

“You get an opportunity to find out what other cities are doing to solve political problems,” said New Haven Mayor Toni Harp, also a first-timer.

The mayors will meet with Obama administration officials and members of their congressional delegation to try to find help for local problems and projects. 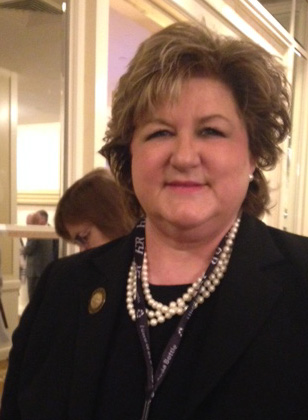 To East Hartford Mayor Marcia Leclerc, that means support for her energy conservation projects and finding money to shore up infrastructure.

Her town recently refitted its street lamps with LEDs and is placing solar panels on landfills. “We need money for our roads and bridges,” she said.

Hartford Mayor Pedro Segarra said the week-long event is a learning opportunity about what’s going on in Congress and a chance to smoke out new resources. For instance, he said, he discovered a land and water conservation trust that could help him maintain his city’s parks.

Segarra also met with Interior Department officials about plans to turn Hartford’s Coltsvillle neighborhood into a national historical park. Last month  Congress approved legislation that would create the Coltsville national park, along with about a dozen others.

“The problem is that [the Interior Department] got additional parks approved, but they did not get additional appropriations,” Segarra said.

With Congress in gridlock, intense sniping between Capitol Hill and the White House, and a shrinking supply of federal dollars, it may be difficult for the nation’s mayors to get what they want from Washington. But Segarra was philosophical. “Some doors close and others open,” he said.

Bridgeport Mayor Bill Finch is also optimistic. “As much as we groan about Washington, there’s still a lot of money here,” he said.

Harp said the conference is also an opportunity to find private funding for local projects, including a Wells Fargo community grant program. 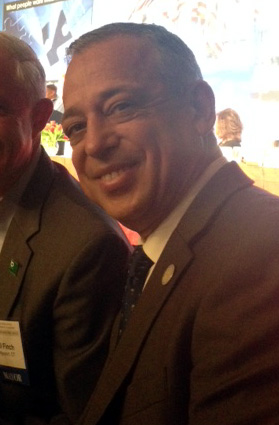 At their luncheon Wednesday, pollster Frank Luntz told the mayors they should do what their constituents do — accomplish more with less. Washington, mired in discord and the subject of public contempt, can no longer lead, he said.

Luntz told the mayors they are the logical  alternative for people to turn to, and constituents want them to be decisive, accountable, decision-oriented and non-partisan.

“You have to do it because they don’t trust Washington,” he said.

Going forward, Connecticut’s mayors  can attend a number of breakout sessions on housing, education, policing, and on women mayors.

Finch will lead a discussion on energy independence and climate protection. Segarra is on a panel on immigration. But Boughton and Trumbull First Selectman Tim Herbst took a break from the policy discussion Wednesday to tour the U.S. Capitol.

Throughout the conference, mayors are subjected to pitches from companies that are trying to promote everything from airlines to soft drinks and chocolates. Their booths, offering a number of freebies, line the Capitol Hilton that hosts the event.

Among the booths is one staffed by Mayors Against Illegal Guns. Volunteer Elaine Arndt said business is good.

Thursday the mayors will hear from Vice President Joe Biden, and on Friday meet with President Obama and other administration officials.

Given a chance to speak to Obama, Boughton said he would address the economic recovery.

“I’d tell him, ‘The metrics are good, but things are in a very fragile state,’” the Republican mayor and former gubernatorial hopeful, said.

Correction: An earlier version of this story erroneously referred to East Hartford Mayor Marcia Leclerc as being from West Hartford.