Budget talks at high noon — in the cafeteria 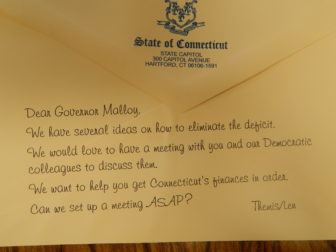 The “back-of-the-envelop” appeal for budget talks from the House and Senate minority leaders, Themis Klarides and Len Fasano

The partisan debate over Connecticut’s growing budget deficit, which featured three days’ worth of verbal jabs and taunts by Gov. Dannel P. Malloy and Republican legislative leaders, will close the week Friday with all parties – having lunch.

“Dear Len and Themis, Got your note,” Malloy wrote Thursday to House Minority Leader Themis Klarides, R-Derby, and Senate Minority Leader Len Fasano, R-North Haven – a memo that was sent out via Twitter. “Was planning on having lunch in the cafeteria tomorrow at noon. Please bring your ideas, in writing if possible. I’ll have someone hold a table.”

“It’s a date!” Klarides tweeted back. Fasano is out of town, and it was unclear late Thursday if the Senate minority leader would send someone in his place.

Republicans, who have charged the Democratic governor for the last eight months with grossly understating Connecticut’s fiscal challenges, were rebuffed sharply on Wednesday when they asked Malloy to sit down and craft a bipartisan budget stabilization plan.

“Dear Governor Malloy, We have several ideas on how to eliminate the deficit,” the House and Senate Republican leaders, Themis Klarides of Derby and Len Fasano of North Haven, wrote. “We would love to have a meeting with you and our Democratic colleagues to discuss them.

“We want to help you get Connecticut’s finances in order. Can we set up a meeting ASAP? Themis/Len”

“What’s the harm in having a conversation, in brainstorming ideas among people with different experiences and perspectives?” the GOP leaders wrote. “The only harm here comes from inaction and inability to buckle down and create a long-term solution to a ballooning problem. We can no longer sit around waiting for the numbers to sink further.”

Klarides and Fasano have questioned repeatedly whether the Malloy administration has acknowledged the full extent of red ink facing this year’s budget.

Malloy frustrated Republicans throughout last summer and fall’s gubernatorial campaign as he said repeatedly that “there isn’t going to be a deficit.”

And Republicans balked last May when Malloy and Democrats closed a last-minute gap in the new budget by assuming an extra $75 million in “miscellaneous” tax receipts would be collected.

On Nov. 13, just nine days after the election, the governor’s budget office released a $100 million deficit projection for the current year.

Within a week Malloy ordered emergency cuts and froze most state hiring, whittling the shortfall down to about $32 million.

But this week the deficit jumped back to $121 million, driven largely by declining fuel tax receipts and cost-overruns in Medicaid.

And Klarides and Fasano noted this week that this latest projection still doesn’t recognize the full cost of retiree health care costs identified by the comptroller. It also continues to assume all “miscellaneous” tax receipts will be achieved by June 30.

All totaled, more than $80 million in additional potential red ink hovers over the budget, threatening to push a $121 million deficit over $200 million, the GOP wrote.

Malloy does have limited authority under state law to unilaterally reduce spending in most areas by up to 5 percent. And the governor said this week he soon would announce a second round of rescissions to further mitigate the deficit.

“It is a tiny, tiny percentage of the budget,” she said, adding that a shortfall of this size typically is handled by the governor with rescissions.

But Bye also said Republicans don’t need to be in negotiations, which typically are held behind closed doors, to disclose their cost-saving proposals.

“They can certainly put out their ideas,” she said. “There is nothing stopping them from doing that.”

Klarides added Thursday in a statement to The Mirror that, “No one person, no one political party, has all the answers or solutions to the challenges we face, and we won’t come up with the best plans unless we sit down and talk.”

Fasano added that “There is no one-size-fits-all answer to fix our deficit. What we need to do is get everyone in a room and go through state appropriations line by line and work together to determine whether or not there is a statewide benefit to each item. Then, we can consider reducing or eliminating appropriations.”