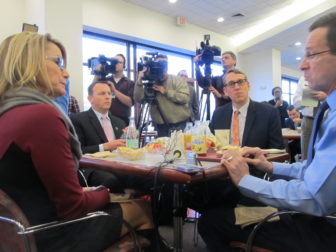 Two pols, two aides and bunch of media. Just another day in the LOB cafeteria.

Ok, they took a meeting.

Answering a dare and a double dare to sit and talk about deficit projections, Gov. Dannel P. Malloy and House Minority Leader Themis Klarides, R-Derby, each accompanied by fiscal advisers, dined in a public cafeteria Friday, surrounded by a tight circle of aides, reporters, photographers and cops.

They opened their noon-time conversation in the Legislative Office Building quite reasonably, reviewing exactly how the hell they had come to be sitting in a public cafeteria, surrounded by a tight circle of aides, reporters and cops. Their budget advisers sat mutely, knowing their expertise was unlikely to come into play.

“So, let me just say this. Any time you want to have a meeting, call the office and schedule. You and I, we can do that,” Malloy said, his voice low, as though confiding a sentiment unheard by the tiny microphones clipped to an inverted paper cup. “At least get me the invitation before you give it to the press.”

Klarides, who recently took over as leader of the House Republican minority, seemed to find that reasonable.

Malloy did not press the point.

It cannot be said nothing was accomplished. The Democratic governor outlined a procedure for future meetings.

“If I want a meeting with you, I’ll pick up the phone and call you,” Malloy said.

Klarides did not object.

“If you want a meeting with me, you pick up the phone and call me,” Malloy said.

Again, Klarides did not object.

“I appreciate that, governor,” Klarides said. “I don’t think I disagree with almost anything that you say.”

Klarides and Senate Minority Leader Len Fasano, R-North Haven, each had complained that Malloy was not open to a frank discussion of the state’s fiscal condition. 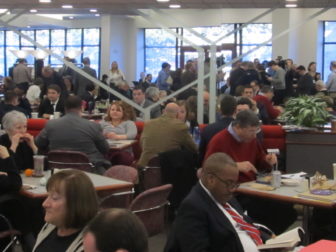 Other diners quickly ignored the media huddle around Malloy’s table, which is visible in the mirror on the rear wall.

Malloy suggested, somewhat cheekily, if they had any great ideas about how to cut spending or raise revenue, they could jot them down on the back of an envelope.

The Republicans responded with a press-release/invitation to meeting printed, yes, on the back of an envelope. Malloy’s answer came Thursday, via Twitter and other means: Fine, he’d be in the LOB cafeteria at noon, ready to chat.

Fasano, who was out of state visiting a daughter, sent his regrets.

Malloy arrived with Ben Barnes and a cheesesteak.

Klarides followed with a grilled cheese and Jared Schmitt.

Barnes is Malloy’s budget chief. Schmitt advises Klarides on fiscal issues. Mark Bergman, the new communication’s director for Malloy, and Patrick O’Neill, the press secretary of the House GOP, quietly introduced each other.

“I think we all agree on more things than we don’t. And that’s best for the state,” Klarides told Malloy. “But this deficit we have now is not going in the right direction. We were all hoping that Christmas retail sales would be higher than they were.”

For the record, they sat at a square table, cleverly avoiding any head-of-the-table issues that might come with a rectangle.

Instead of lingering over cappuccino, each met the press separately.

Fasano told The Mirror in a telephone interview that he made a point of not sending a sub. He said he was disappointed by the governor’s “flippant response” to Republican leaders’ request for serious negotiations.

“I did not want to dignify that event by sending anyone from the Senate Republican Caucus,” Fasano said. “That was just really shameful.”

The administration left with the same position: The GOP didn’t present any ideas before, during or after the lunch.

Klarides said the relatively simple exercise of asking all agencies to forfeit one-half of 1 percent of their budget’s this year could save tens of millions of dollars, possibly even approaching $100 million.

But that is similar to the process Malloy already is following to mitigate the $121 million shortfall in the current budget.

Current law gives the governor limited authority to unilaterally reduce spending in most areas by up to 5 percent. Malloy saved about $55 million through emergency cuts in November and was expected late Friday to announce a second round of rescissions to further mitigate the deficit.

From July through October, the administration reported no signs of cost-overruns throughout the budget, let alone any deficit.

Then after the election it reported a $100 million shortfall. That gap was $75 million shy of 1 percent of the general fund – the statutory threshold that compels the governor to issue a deficit-mitigation plan to the legislature.

After whittling the deficit down to $32 million, the administration reported earlier this week that eroding fuel tax receipts and increased Medicaid costs pushed the deficit back up to $121 million.

It certainly seems coincidental that for months and months and months during an election cycle we were supposedly going forward economically and things were looking up and we weren’t going to have a deficit,” Klarides said. “And then within less than a few weeks after the election, all of a sudden a deficit pops up?”

“You don’t know what your monthly expenses are, or your monthly income is, or your quarterly or your yearly, until the month, the quarter, the year is over,” Malloy said.