A struggle for high ground on campaign reform in CT 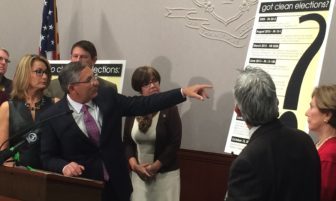 Senate Democrats successfully pushed in 2013 to allow the state parties to make unlimited coordinated expenditures on legislative campaigns, even for candidates participating in the voluntary public financing program.

In the case of Sen. Ted Kennedy Jr., D-Branford, it allowed him to accept nearly $94,000 in public financing for his first campaign last year, yet also benefit from $265,000 from the state party and Senate Democratic political action committees.

Senate Democrats defend the 2013 revisions as a necessary counterweight to the threat of unlimited independent expenditures permitted by the Supreme Court’s Citizens United decision.

“The changes we made in 2013 maintained our public financing system from the blow to the heart that was Citizens United,” said Senate President Pro Tem Martin M. Looney, D-New Haven.

The Republicans also want to stem the roundabout flow of contributions from state contractors.

Contractors were banned from directly giving to state campaigns in 2005, a response to the bid-rigging scandal that toppled Republican Gov. John G. Rowland, but they still managed to generously support Democratic Gov. Dannel P. Malloy’s re-election in 2014.

The money flowed through the Democratic Party’s federal campaign account, which is not covered by the state ban.

The federal account supported a massive get-out-the-vote effort for state and federal candidates, and the party used federal campaign money to directly fund a mailing for Malloy. The State Elections Enforcement Commission is investigating the latter expense as a potential violation of state law.

The Republicans are demanding strong laws and better enforcement powers.

Senate Minority Leader Len Fasano, R-North Haven, said the elections commission should be given the power to freeze expenditures that appear to violate campaign finance laws. A fine imposed after an election is simply the cost of doing business, not a deterrent, he said.

Such a provision also could have been used to stop mailers by more than a dozen Republican legislative candidates that are the subject of a complaint by Democrats, who say the publicly financed mailings illegally attacked Malloy.

“If Republicans were serious about this, they wouldn’t have spent [public] CEP money for legislative candidates to attack not their opponents but the governor himself,” said Michael Mandell, the executive director of the Connecticut Democratic Party.

The Republicans are offering themselves as saviors of a system whose creation most of them opposed.

The Citizens’ Election Program, with its voluntary public financing system and bans on state contractor contributions, was a compromise reached by a Democratic legislature and Gov. M. Jodi Rell, the Republican who succeeded Rowland.

Rell accepted public financing in return for reforms that limited the influence of contractors, lobbyists and the legislative political action committees they funded.

Only four Republicans in the House and four in the Senate voted for the law. Fasano backed it, while House Minority Leader Themis Klarides, R-Derby, did not.

Both said the system, which has made more races competitive and diminished the influence of special interests at the General Assembly, is worth saving.

In addition to giving the elections enforcement commission stronger powers, the GOP would cap expenditures that state parties can make on various types of races: $250,000 for governor, $75,000 for other statewide constitutional offices, $10,000 for state Senate, and $3,500 for state House.

They also would eliminate public grants for unopposed races, cut all grants by 25 percent, and reduce donor limits to state parties from $10,000 to $5,000.

“Some of this actually sounds familiar to me, but before the Republicans go running to the cameras, I wish they would talk to the chairs of the elections committee and work on these issues on a bipartisan basis,” Sharkey said.

“Considering their lack of support in the past, it’s always curious that Republicans only become interested in campaign reforms when they perceive a potential political advantage,” he said. “The real problem of course is the anonymous, unlimited dark money allowed under Citizens United.”

The GOP is responding now to what benefitted Democrats in 2014, just as Democrats passed the 2013 revisions in response to a super PAC that financed attack mailing and commercials late in 2012. They were largely ineffectual, but Democrats saw the independent expenditures as a harbinger of things to come.

In fact, Democrats say the money diverted to Kennedy was to prepare for attacks from national groups. But they never came.

There was no repeat of major outside spending in 2014. Major expenditures by super PACs were on the governor’s race: About $18 million, nearly evenly divided by party, was used to attack Malloy and Tom Foley, his GOP opponent.

“The fact we didn’t see it in 2014 is reflective of the fact we had a close governor’s race in Connecticut, and we saw all the spending there,” Looney said. “Fortunately, from our point of view, the outside spending in 2012 was not effective, but we can’t count on that degree of ineptitude going forward.”