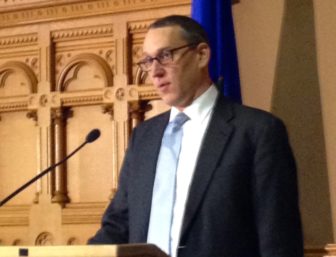 Benjamin Barnes, secretary of the Office of Policy and Management, speaks at the annual budget forum of Connecticut Voices for Children Tuesday.

Gov. Dannel P. Malloy’s budget director warned advocates for children, the poor and other disadvantaged citizens to brace for a lean budget when the administration releases its spending plan in two weeks.

Office of Policy and Management Secretary Benjamin Barnes also said the administration still is fighting to protect education, social services and health care. But surging employee benefit costs – caused by decades’ worth of inadequate savings practices – are squeezing other priorities’ share of the budget.

And while one advocacy group made its pitch for a new income tax credit to help families with dependents, Barnes was skeptical that an already approved tax cut for the working poor would kick in this year as planned.

“We are facing some extraordinary challenges,” Barnes told the crowd of about 75 people gathered at the Capitol for the annual budget forum of Connecticut Voices for Children, a New Haven-based nonprofit policy group.

“I think of this as the kickoff to my annual ‘skunk at the picnic’ tour,” he said.

The governor – and likely a majority of state lawmakers – pledged on the campaign trail last fall not to raise taxes, Barnes said.

That means keeping general fund spending next year close to this year’s $17.5 billion.

The only problem with that? State analysts estimate Connecticut must spend $1.2 billion to $1.3 billion more just to maintain current services.

And payments the state owes in connection with its pension funds and retiree health benefits are surging upward by hundreds of millions of dollars.

“There are things that are very difficult for us to change,” Barnes said.

Nick Defiesta, a fiscal policy fellow with Connecticut Voices, noted that while 40 percent of the state budget was spent on programs affecting children – education, health care and social services – 25 years ago, just 30 percent is now.

That 10 percent difference, adjusted for inflation to current values, would represent an extra $1.8 billion.

The state Earned Income Tax Credit, a refundable credit on Connecticut’s income tax, is scheduled to rise in 2015 from 27.5 percent to 30 percent of the federal EITC.

The EITC is “the single-most effective way to move working families out of poverty,” Shemitz said, adding there are households benefiting in all 169 of the state’s cities and towns.

When asked if enhancing the tax credit for working poor would be delayed in the governor’s budget, Barnes said, “I don’t know…We’d all love it to be higher, but we have to make tough choices.”

Barnes added that at 27.5 percent, Connecticut already offers one of the largest EITC’s of any state.

He noted that Connecticut does offer a “personal exemption” on its income tax. This exempts from taxation the first: $12,000 earned by individuals, $24,000 earned by couples, and $19,000 earned by someone filing as “head of household.” The latter designation can be filed only by someone caring for at least one dependent.

All of those exemptions gradually are phased out at higher income levels.