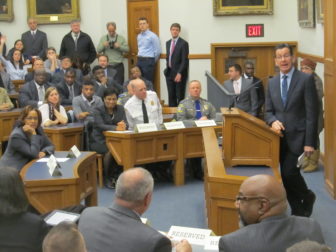 New Haven – Gov. Dannel P. Malloy outlined “second-chance society” initiatives for non-violent offenders Tuesday in a Yale policy address that pronounced the zero-tolerance approach of the 1980s and 1990s a waste of human and fiscal capital.

“It was a failed experiment,” Malloy told a receptive audience of students, mayors, legislators and senior police and administration officials at the law school. “It didn’t work for our country or our state.”

Malloy, a former prosecutor in New York and urban mayor in Connecticut, said he would seek the repeal of mandatory minimum sentences for simple drug possession, which are now primarily imposed on those arrested within 1,200 feet of schools, day cares or public housing — wide swaths of most cities.

He also would ask the General Assembly to reclassify some non-violent offenses as misdemeanors, streamline the parole system and ease access to pardons that scrub criminal records and can remove barriers to employment.

“Today, criminal justice too often means life-long punishment and a permanent stigma,” Malloy said. “Make no mistake, a crime’s a crime, and offenders should be held accountable, and there should be punishment.”

But that punishment can effectively last a lifetime as prison records dog young offenders well into adulthood, he said.

His speech was a broader condemnation of a get-tough approach that also has been repudiated by a growing number of Republican red-state governors, giving the recently re-elected Democrat a measure of political cover. It led to a prison building boom in Connecticut that saw the state’s inmate population quadruple to more than 19,000.

“The consequences of this cultural shift have been staggering for our country and for our state,” Malloy said. “We built modern prisons when we should have been building modern schools.”

Recognizing the political difficulty of any effort that can be characterized as “easy on crime,” Malloy framed the initiative as a necessary way to exploit and reinforce Connecticut’s historically low crime rate, its shrinking prison population and its decline in recidivism.

The assertion is supported by FBI data that shows the 80,298 index crimes – serious crimes against persons and property that are tracked annually – reported in Connecticut in 2013 were the lowest since 1967.

Malloy successfully pushed in his first term for decriminalizing possession of small amounts of marijuana, a change that he says has led to 6,000 fewer drug arrests. In a law phased in over two years, beginning Jan. 1, 2010, the state also has raised from 16 to 18 the age at which defendants are tried as adults for most crimes.

New Haven Mayor Toni Harp, a primary sponsor of the “raise-the-age” bill while in the General Assembly, and Rep. Toni Walker, D-New Haven, another sponsor, were in the audience, as was Bridgeport Mayor Bill Finch and Joette Katz, the former Supreme Court justice who is commissioner of the Department of Children and Families.

On Wednesday, Malloy will push his plan at a roundtable discussion in Hartford’s North End with Mayor Pedro Segarra, Correction Commissioner Scott Semple, faith leaders, legislators and others.

By proposing to end mandatory minimum sentences for drug possession, Malloy is indirectly taking up a cause promoted by the legislature’s Black and Latino Caucus: Ending enhanced penalties for drug crimes committed within 1,200 feet of a school, day care or public housing project.

“The punishment shouldn’t be enhanced because of where you live,” Rep. Douglas McCrory, D-Hartford, who is an educator, said in 2013 when the caucus unsuccessfully sought to shrink the zones to 300 feet. “Fair is fair.”

The governor said he would not change the penalties for drug dealing or possession with intent to sell, only simple possession.

His administration has been making the case that Connecticut has been outpacing many other states in reducing crime.

Violent crime dropped 14.6 percent in 2013 in the state’s three largest cities, with reductions of 11 percent in Hartford, 12.1 percent in New Haven and 20.6 percent in Bridgeport. Statewide, the drop was 10.1 percent.

From fiscal year 2010 to 2014, the caseloads in the lower-level, geographic area courts fell 38 percent in Hartford, 23 percent in Bridgeport and 23 percent in New Haven.

Murders in Connecticut reached a high of 215 in 1994, when gangs were battling for drug turf in the cities, drawing a massive federal response. In 2013, the state had 86 murders, and unofficial stats for 2014 show 82 murders.