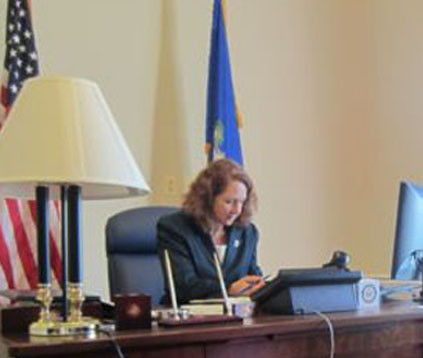 Washington – For two days in a row, Rep. Elizabeth Esty has split with the White House and the rest of the Connecticut delegation on two bills that would make a series of tax breaks permanent.

The bills would make permanent six of about 50 tax breaks known as “extenders” because they are not a permanent part of the tax code and must be renewed by Congress every year or two.

The tax breaks are popular with small businesses. The controversy lies in that the GOP sponsors of these bills — which would largely favor businesses — have not included in the legislation a way to pay for the tax breaks, causing an  increase in the deficit.

Another reason Democrats and the White House have criticized the bills is because Republicans have ignored other extenders, including those that would benefit commuters, families with children and teachers.

Esty on Friday was one of 33 Democrats who broke ranks to vote for the America’s Small Business Tax Relief Act of 2015, a bill that would increase to $500,000 the annual amount of capital investments businesses can immediately deduct from their taxable income. The current limit is $25,000 but the tax break has been $500,000.

Esty also said she heard from business people in her district about the need to make the tax break permanent.

“While I strongly believe Congress should enact comprehensive tax reform, we should not hold small businesses hostage in the process,” she said.

In recommending a veto of the bill, the Office of Management and Budget said the America’s Small Business Tax Relief Act would add $79 billion to the deficit over 10 years.

“House Republicans are making clear their priorities by rushing to make business tax cuts permanent without offsets when key tax credit improvements benefiting 16 million working families with children are scheduled to expire,” the OMB said. “They are also seeking to impose a double standard by adding to the deficit to continue and create tax breaks for businesses, after insisting on offsetting the cost of measures that help middle-class and working Americans, such as the extension of emergency unemployment benefits.”

The vote for the bill was 272-142, short of the two-thirds needed to override a veto by President Obama.

On the previous day, however, the House approved another tax cut package by a margin that would override a veto.

The Fighting Hunger Incentive Act passed 279-137, with 39 Democrats, including Esty, voting for the legislation. So did all House Republicans, except Rep. Walter Jones of North Carolina.

The legislation would extend and make permanent a tax break that allows the deduction of food inventory donations of up to 15 percent of the donating organization’s net income. This is an increase from the 10 per cent that was previously allowed.

The bill would also make permanent a conservation easement tax break and another measure that allows tax-free donations from a 401(K) account and cuts the excise tax on the investment income of certain foundations.

Once again, in its call for a veto, the OMB said the bill would grow the deficit because the legislation did not include a way to pay for its cost, estimated at $14.3 billion over 10 years.

Esty said she voted for the Fighting Hunger Incentive Act because “as a country, we should do all we can to encourage giving back to our communities.”

“I voted for the Fighting Hunger Incentive Act because it makes the tax deduction for charitable giving, including the charitable contributions of land for conservation purposes, permanent,” she said. “I heard from non-profits and organizations throughout central and northwest Connecticut that rely on the generosity of their neighbors to survive. They told me directly how important these tax incentives are to funding their core missions.”

But Rep. Rosa DeLauro, D-3rd District, opposed the bill because  “it is sorrowful when unpaid-for tax spending is rammed through the House that increases the deficit and further squeezes the funding for other critical programs.”

“I support tax breaks for charities and small businesses, but I cannot in good conscience support legislation that makes selected tax breaks permanent while Congress still has not extended tax breaks for working Americans, such as the Child Tax Credit or the Earned Income Tax Credit,” DeLauro said. “Yesterday’s vote in particular was a shameless attempt by the majority to pretend they care about the millions of hungry Americans. If they truly cared, they would be working across the aisle to strengthen our social safety net, including the SNAP program.”

Republicans cheered they were able to win veto-proof support for the bill — something they have failed to muster on the Keystone Pipeline bill and other legislation under Obama’s veto threat.

But the legislation still has to be approved by the Senate. And if it gets to the president’s desk and he vetoes the bill, supporters would have to have two-thirds of the votes in the House and Senate to override the veto.

That may be difficult to do for the tax bills.

While the margin in Thursday’s vote was big enough to override a presidential veto, not every member voted. If all 433 House members voted — there are two vacancies — it would take 289 votes to override Obama’s veto.