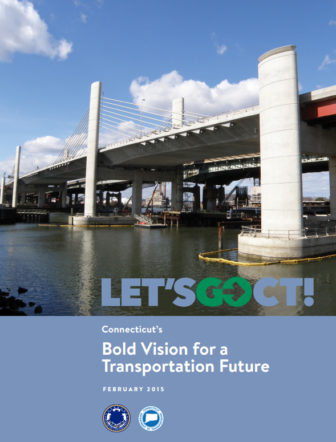 The cover of the governor’s 30-year transportation plan.

Gov. Dannel P. Malloy put forward a 30-year, $100 billion transportation initiative Wednesday, including a $10 billion investment in state and federal funds over the next five years.

But the governor’s proposal to make major investments in highways, bridges, railroads, buses, ports and bike paths did not say how the administration would keep transportation spending balanced beyond the next two years.

The administration said the initiative almost certainly would require additional revenues, given that the state’s Special Transportation Fund is otherwise headed for a deficit in two years and insolvency in four.

The plan “is designed to give you a better understanding of what a best-in-class transportation system looks like, of what it could mean for Connecticut, both in terms of economic development and a better quality of life,” Malloy told legislators in his budget address.

Malloy’s proposal focuses heavily on designing projects during the next five years.

Upgrades would be planned for Metro-North, Shoreline East and Hartford commuter rail lines, including station renovations and new parking.

Major highway and bridge projects include:

CTfastrak, the new busway linking New Britain and Hartford, would be extended to the east, linking Manchester with the capital city.

The state would dedicate $2.8 billion in new capital money over the next five years to designing these projects. These dollars would complement $3.8 billion in state transportation bonding already planned for the same period, and an estimated $3.4 billion in matching federal funds that would be secured.

Office of Policy and Management Secretary Benjamin Barnes said the governor’s new budget proposal for the next two fiscal years would dedicate about $56 million in total to expand Department of Transportation staffing.

The DOT has been a subject of criticism from transportation advocates who argue it is badly understaffed. Malloy and legislators put funds to add 103 new DOT positions in the current budget – but overall budget deficits have led to hiring restrictions. The department actually has about 100 fewer employees now than it did last fiscal year. 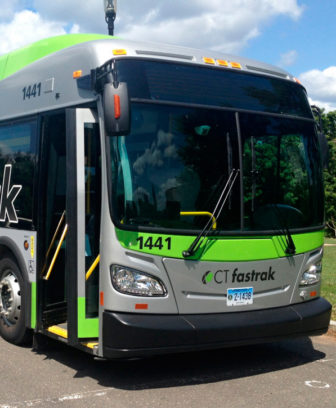 With state fuel tax receipts on the decline because of falling wholesale prices and motorist conservation, Barnes noted that the Special Transportation Fund – which pays for DOT operations and the debt service on state transportation bonds – is projected to run $29 million into deficit by 2018.

And by 2020, the fund would be running more than $220 million in the red, and small reserves would be exhausted as well.

Further complicating matters, the governor’s initiative would be paid for out of existing fund resources through 2017 – but not after that.

House Minority Leader Themis Klarides, R-Derby, chastised the governor for not offering specifics on how to cover these costs.

“He didn’t even utter the word ‘tolls’ because he knows it is a sensitive subject,” she said.

Republicans had offered a smaller plan earlier this month that dedicated about one-third of the funding to transportation that Malloy proposed over the next three decades. The GOP plan didn’t require any new revenue, but it also didn’t identify specific projects.

“The governor appropriately set out a vision for our economic future,” the speaker said. “It’s a great first step.”

The governor renewed his call Wednesday for some type of legal “lockbox” mechanism “that ensures every dollar raised for transportation is spent on transportation.” Historically, the legislature has frequently diverted transportation funds to non-transportation purposes.

The governor’s proposal also called for the creation of a new bipartisan panel of transportation experts to explore options to pay for the initiative.

Danbury Mayor Mark Boughton, who sought the Republican nomination for governor last year, complimented the governor for turning the state’s attention to long-neglected transportation infrastructure. He said he understood why Malloy is looking for help in finding a way for pay for it.

“The numbers, they’re so big, they’re so monumental, it will be really difficult for anybody,” Boughton said.

Boughton said the long time frame also invites skepticism: “The fact of the matter is we’ll all be playing around in hover cars like the Jetsons before any shovel gets in the ground.”