For now, Malloy says this budget problem is the legislature’s 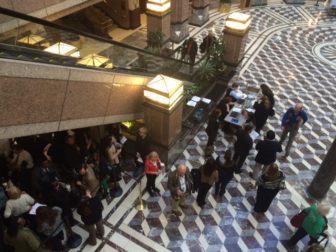 A line forms to sign up to testify at a public hearing on the governor’s proposed budget.

Exactly four years ago, Gov. Dannel P. Malloy was in Norwich for the fifth of 17 town-hall meetings to pitch Connecticut on the labor concessions and record tax increase he proposed to erase the nation’s largest per-capita state deficit.

Today, he is vacationing in Puerto Rico. There is no tour this year to sell the public on his plan to resolve a smaller shortfall with business taxes and spending cuts that fall heavily on the poor, elderly and disabled.

“We’ve gotten it off my desk,” Malloy says of his latest budget proposal. “It’s now up to the legislature.”

The governor’s diminished role, as well as his refusal to seek higher income-tax rates or more labor concessions, are among the factors paradoxically making this year’s $1.2 billion shortfall as politically challenging as the $3.65 billion gap of 2011.

Malloy laughed at Fasano’s gibe, but it is undeniable that the governor is treading far lighter in this, the first year of his second term, than he did upon taking office.

In 2011, Malloy gave legislators a blueprint and insisted it be followed. This year, even many Democrats say his proposal is viewed as barely a starting point in crafting a $40 billion biennial budget.

“What we will be producing will be a new budget, basically an entirely new budget,” said House Speaker J. Brendan Sharkey, D-Hamden.

Even if they can raise new revenue to mitigate the spending cuts, or if crucial April tax receipts are stronger than expected, legislators still have to get around a spending cap.

“You hope for that,” Sen. Beth Bye, D-West Hartford, said of prospects for a good April. “But then there’s still the spending cap. I think that’s why people are saying this is an incredibly difficult year. And even seasoned people are saying, ‘How do we manage this?’ ”

Without offering specifics, Democrats say they already are exploring redefining what is covered by the spending cap, a prospect that alarms the GOP.

“I think we’re concerned about it every year,” said House Minority Leader Themis Klarides, R-Derby. “Every year we play a different shell game.”

House Majority Leader Joe Aresimowicz, D-Berlin, acknowledges that Democrats are exploring whether the cap can be redefined by a simple majority. But he cautioned that margins are tighter.

In 2011, when the House Democrats had a 23-vote cushion, 15 caucus members refused to vote for Malloy’s first budget, primarily over tax increases. This year, the first of Malloy’s second term, Democrats cannot afford to lose more than 11 votes.

Aresimowicz is fond of telling people he keeps two lists that illustrate the challenge in making hard budget decisions about revenue increases, spending cuts or revisions to the cap. One has the names of Democrats who won close races. The other lists Democrats who think they are vulnerable.

“So, crafting this budget is going to have to take all those considerations into account,” Aresimowicz said.

The one Democrat at the Capitol who doesn’t seem to feel the pressure of finding a politically acceptable mix of spending cuts and revenue increases is Malloy.

Democrats lack the votes to exceed the cap, as it is presently defined.

Malloy views those as legislative issues.

“In essence, [that] shifts a lot of the hard decision-making from my office to the legislature,” Malloy said.

The political challenges of this budget may be greater this year for the legislature, but not for him in his view. He made a face when told that many at the Capitol see the politics of this budget as more challenging than what he faced in 2011.

The impact of his proposed budget cuts play out at public hearings packed with operators, employees and some clients of group homes, nursing homes and out-patient mental health clinics.

“This is the worst day of the year,” Sen. Mae Flexer, D-Killingly, said one recent Friday before a public hearing on many social service cuts. 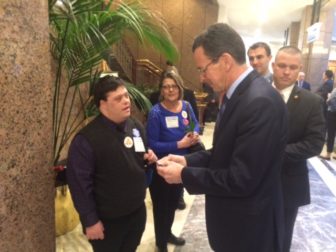 One of the cuts would take away $25 million from out-patient mental health clinics, resulting in reduced reimbursements after seven years of no increases, said Raymond J. Gorman, the president of Community Mental Health Affiliates.

“That’s the end of the day. I mean, the game is over. There’s no more places to shift those costs. There is no hidden reservoir or financial reserve for the majority of these organizations,” Gorman said. “This is not rhetoric. It’s the facts.”

Gorman said he’s closed eight clinics over the past five years, a significant loss of assets in an era when the state has limited access to in-patient psychiatric beds.

Gorman said the only conversation over the budget is with legislators, not the administration.

One person who objects to Malloy’s proposed budget did get a few minutes with the governor Friday as Malloy walked through the Legislative Office Building.

“Are you the governor?” asked Zeb Olko of Enfield, who has an intellectual disability.

Malloy replied that he was.

Olko told Malloy he was looking for a job after an internship in Washington, then handed him his card.

In testimony to the Appropriations Committee, Olko said he is qualified for supportive services, but none are available.

“I am back home unable to find a job and without any DDS supports and services,” he said in prepared testimony. “I am told there is no funding. I am not asking for very much. My level of need is low. I am asking that you restore the budget cuts to DDS so I can find a job and feel like an adult.”

For now, the governor does not feel compelled to engage the legislature about changes to the budget, nor does he say he feels constrained by what legislators and lobbyists see as limited options.

Malloy said he felt enormous pressure four years ago to convince the state employee unions to accept a pay freeze and other concessions, without which the first Democratic governor in a generation would have been forced to make massive layoffs.

“This is doable,” Malloy said. “Standing at this point four years ago, I’m not sure I was as convinced as I was pretending to be that it was doable.”

The legislators still are analyzing Malloy’s budget, learning what it would do.

Rep. Toni Walker, D-New Haven, the House co-chair of the Appropriations Committee, likened the continuing examination of Malloy’s proposal to peeling back the layers of an onion.

“I haven’t peeled back the onion, totally,” Walker said. “We need to make sure that these reductions don’t create even more problems four years from now.”

“Right now, we’re hearing from the public, hundreds of people every night telling us how these cuts to government affect their everyday lives. That’s where we are right now,” said Bye, her co-chair.

Right now, no one is sure of finding the votes to accept Malloy’s cuts, raise taxes or redefine the spending cap.