The $38 million shortfall projected two weeks ago has grown to $48 million – a 4 percent structural deficit from what is needed to continue providing existing programs and staffing levels, school leaders said.

And that shortfall could easily grow.

That’s because the 4 percent shortfall assumes the colleges and universities will enroll at least the same number of students next school year even though enrollment at the public colleges has been declining  and the pool of traditional college-age students in Connecticut is shrinking.

The projection also doesn’t factor in the cost of any faculty and staff switching from a 401k-type retirement plan to the state’s pension plan, a move that costs the college system significantly more. This year 288 employees switched to the pension system, which required the university system to spend nearly $9 million more.

College employees can switch to the state’s pension retirement system because of a state arbitrator’s ruling five years ago on union complaints that employees were intimidated into not choosing the pension option and were given no meaningful explanation of the differences in the plans.

The $48 million shortfall also assumes CSCU won’t have to spend any more next year to cover employees’ medical expenses. In recent years, health costs have increased by as much as 10.1 percent, the comptroller’s office reports.

“I guess we are all speechless,” Rep. Toni Walker, the House chairwoman of the legislature’s powerful Appropriations Committee, told college leaders after hearing the bad news.

Sen. John Kissel, R-Enfield, questioned the wisdom of not including increased health care and retirement costs in budget forecasts.

“We all think that $48 million is the magic number now, but two weeks ago it was $38 million. Now, God forbid, we are all scrambling when all of a sudden it’s $58 million two weeks from now,” he said. 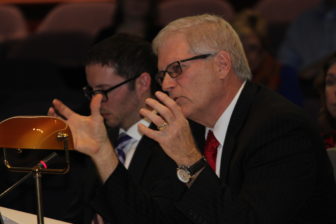 The college system’s projected deficit jumped by $10 million when the state comptroller told CSCU leaders they would need to put even more money toward employees’ retirement plans next year. For example, for an employee earning $100,000, colleges will need to contribute $54,900 next year toward that person’s pension plan compared to the $50,500 contributed this year. The contribution is so large because the state is playing catch-up after years of chronically underfunding its pension liabilities.

But without more support from the state, Gray warned, he could be forced to substantially increase tuition, furlough and lay off staff, and reduce the number of degrees the system offers.

“We face a very significant budget problem,” Gray told the legislators. “When you are dealing with something of this magnitude, everything has to be on the table.”

The reality is we are not going to be able to make them whole. It’s a horrible situation.
Rep. Roberta Willis, D-Salisbury

This year the state is expected to spend $571.8 million on the CSCU system.

Rep. Roberta Willis, D-Salisbury, said the state is not likely to be in a position to bail out the college system and that college leaders should have a contingency plan.

“I hope they walked out of that meeting really understanding they have to come up with a plan that doesn’t rely on us,” said Willis. “The reality is we are not going to be able to make them whole. It’s a horrible situation.”

In the absence of additional state financial support, Democratic leaders are backing a series of bills aimed at guarding students against predatory or unreasonanble loans. One bill creates an ombudsman’s office to help students navigate the complex student-loan arena. Another bill caps interest rates that lenders can charge students and requires the state’s major student loan lender — CHESLA — to allow students to pay more than their minimum payment each month and to refinance when interest rates are low.