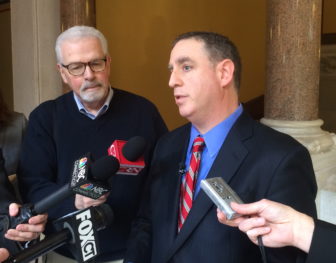 A Quinnipiac University poll released Wednesday shows that Connecticut has grown comfortable with the existing casino industry, but that proponents of expansion face a significant sales job in the months ahead.

Gov. Dannel P. Malloy’s first post-election job rating was his worst in two years, but his lenient policies toward the possession of marijuana were overwhelmingly favored by voters.

The poll gave legislators their first glimpse of public attitudes towards what suddenly has become a major issue of the 2015 session: Whether to allow the Mashantucket Pequots and Mohegans to jointly develop a small casino in the I-91 corridor north of Hartford.

By more than a 2-1 margin, voters view the two tribal casinos and other legal gambling as a positive for the state, but the responses were overwhelmingly negative to casino expansion.

Seventy-five percent said no when asked if they favored more casinos in Connecticut. Opposition dropped to 59 percent when asked about allowing smaller casinos near the Massachusetts and New York borders.

“I’d say it’s benchmark. It’s where the voters stand right now on that issue, but that it could change,” said Douglas Schwartz, the poll’s director. “We’ll see as the proponents of casino expansion make their case, we’ll see if they are able to persuade voters to their side.”

The poll was conducted from March 6 to 9, after news broke about the possibility of casino expansion, but before Senate leaders announced the framework of an expansion plan Tuesday.

The legislation would permit up to three casinos, all geared to out of state competition: one near the Massachusetts line and two closer to New York, in the Bridgeport and Danbury areas.

But the tribes have made clear that their only immediate plan to expand off their reservations in eastern Connecticut would be in the I-91 corridor, where they could intercept patrons on their way to MGM Springfield, a casino expected to open in 2017.

Sixty-nine percent of voters agreed that “it’s better for Connecticut that people who like to gamble spend their money in Connecticut than take it other states.” Sixty-two percent though that expansion would lead to an increase in gambling addiction.

Only 10 percent said they visited a casino “several times” in the past year, while 34 percent went “only once or twice” and 56 went “not at all.”

Malloy’s first post-election job rating was negative, but voters were more optimistic about the next four years with him as governor.

“Half of Connecticut voters say they are optimistic about the next four years with Gov. Malloy,” Schwartz said. “But 44 percent remain gloomy, probably because of the economy. About two thirds say the economy is in bad shape, and only about 1 in 5 says it’s getting better.”

Malloy, 59, who began his second term in January after a difficult re-election, got a positive job rating by only 43 percent of voters, with 47 percent disapproving. He never has had an approval rating of more than 48 percent in the Quinnipiac poll.

As is consistently found by Quinnipiac, voters see Malloy as having strong leadership qualities, but they do not see him as shaping the economy for good or bad. SIxty-three percent say he has made no difference, 29 percent say his economic policies have hurt and six percent say they have helped.

By a 45 percent to 40 percent margin, voters said they approved of Malloy’s handling of transportation. The governor has called for a massive, long-term investment in transportation infrastructure.

Three questions all found moderating views toward the possession and use of marijuana.

Do you support or oppose reducing possession of small amounts of marijuana from a felony to a misdemeanor? Support: 67 percent. Oppose 28 percent.

Do you support or oppose allowing adults in Connecticut to legally possess small amounts of marijuana for personal use? Support: 63 percent. Oppose 34 percent.

Connecticut already has decriminalized the possession of small amounts of marijuana and legalized medical cannabis.

The poll of 1,235 voters has a margin of error of plus or minus 2.8 percentage points.