Twenty years later, Connecticut has a new view of casinos 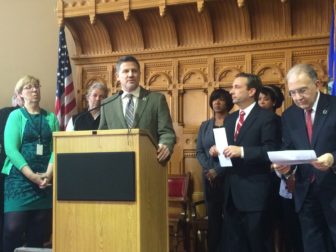 Kevin P. Brown, Mohegan tribal chairman, at the podium. At right is Cystal Whipple of the Mashantucket Pequots and Sens. Bob Duff and Martin Looney. At left is Sen. Catherine A. Osten.

The call Tuesday by Senate leaders for legislation allowing two tribes to jointly build a new casino in the I-91 corridor north of Hartford represents a once-unthinkable expansion of gambling in Connecticut.

Fast receding are questions about morality and the societal impact of expanded gambling. Competition in surrounding states, notably a planned MGM casino-resort in Springfield, has, for the moment at least, distilled the issue to one of jobs.

“Today, we are fighting for jobs and our residents,” said Senate Majority Leader Bob Duff, D-Norwalk. “We would do the same if this were Electric Boat or Pratt & Whitney.”

Duff and Senate President Pro Tem Martin M. Looney, D-New Haven, outlined legislation that would allow the Mashantucket Pequots and Mohegans to build up to three casinos to keep gambling dollars from flowing to New York, Massachusetts and Rhode Island.

“We will not stand aside and let any other state — New York, Massachusetts or Rhode Island — take jobs away from Connecticut. And we will fight for every job that there is here today,” said Sen. Catherine A. Osten, D-Sprague, whose district includes both tribal casinos. “For me, this is about jobs — all day long.”

Kevin P. Brown, tribal chairman of the Mohegans, said the tribes’ focus was a new facility between Hartford and the Massachusetts line, but he appreciated that legislators were considering a broader framework. The new facility would have slots and table games, but not a hotel or entertainment.

“Clearly because of MGM being five miles over the border, we’re somewhat laser-focused on that competition,” Brown said.

The two tribal casinos, Mohegan Sun and the Pequots’ Foxwoods Resorts Casino, have steadily lost revenue and jobs since their most successful year, 2006. Foxwoods’ employment is down from 12,800 to 7,558; Mohegan’s is down from 10,500 to 7,205.

“The prospect of large-scale job creation is of course paramount to what we must focus on,” Klarides said.

Unions that represent workers at Foxwoods and the construction trades stood with the legislators and tribal leaders.

“I think we’ve sort of overcome that concern about gaming as a terrible venture,” Brown said. “And we’ve seen that the good far outweighs the bad in terms of what it provides for good-paying jobs for Connecticut residents and tourism dollars and slots tax revenue dollars.”

A small sign of that acceptance is that high school and college basketball teams now play at the Mohegan Sun arena without controversy or comment.

Larson is co-chairman of the Public Safety and Security Committee, which will hold a public hearing March 17 on casino expansion. The hearing is likely to be a test of how broad the debate will range this year.

Some legislators favor a narrow debate about what it would mean to add a casino, while others are calling for a full debate about the future of gambling, including the role of the Connecticut Lottery and the potential of on-line gaming.

“I think it is a game changer, them coming off their sovereign land,” said Rep. Joseph Verrengia, D-West Hartford, the vice chairman of public safety. “It opens up the compact. I really want to see the lottery at the table in these discussons.”

The Pequots and Mohegans operate their casinos under a compact with the state of Connecticut that requires the tribes to pay the state 25 percent of their gross slots revenues, so long as the tribes have exclusivity on slot machines.

The deal negotiated by Gov. Lowell P. Weicker Jr. made the state a partner in the tribes’ success and created a significant political obstacle to efforts by private developers to open casinos in Hartford and Bridgeport: Opening a new casino without the tribes’ consent meant the loss of the slots revenue, which was $430 million in its best year.

Under the federal law, the sovereign tribes are free to offer any game that was legal in Connecticut, even for such limited purposes as charitable “Las Vegas nights.” The tribes could offer slots only under the terms of the compact with the state.

The state is free to negotiate a different profit-sharing agreement for a new casino built off tribal land. In some states, casinos share up to 49 percent of gross revenue.

Brown said the new casino could be built under the authorization of legislation without renegotiating the compact.

“This, in fact, doesn’t require a reworking of the compact,” Brown said.

Brown and Crystal Whipple, the vice chair of the Pequots tribal council, said the tribes had yet to negotiate the terms of a partnership that would build and operate the casino, if it is approved by the General Assembly.

Their history is rife with conflict dating to colonial times.

Whipple smiled and said the tribes now have a common enemy: Out of state casinos.