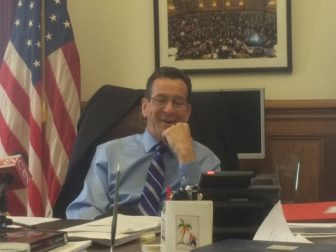 Gov. Dannel P. Malloy delivered a message Thursday aimed at dissuading legislators from trying to circumvent a spending cap that Malloy says is an insurmountable barrier to raising taxes or significantly restoring cuts in his proposed budget for the next biennium.

“I understand that the legislature is having a hard time with what has to be done, and that there’s disagreement on some of those cuts,” Malloy said. “But the reality is that’s the framework, folks. We have a spending cap. There’s not a way around the spending cap.”

The cap has been circumvented in other years, but the Democratic majority confronts a new hurdle: Republicans gained enough seats in 2014 to deny Democrats the 60-percent super-majority necessary to exceed the cap. And it’s far from certain that the Democrats could pass a tax increase, even if the spending-cap issue could be resolved.

“I’m going to tell you that this is the framework,” Malloy said. “There is no remaking the budget. Where’s the money going to come from? There’s no easy way out.”

Another obstacle is Malloy, a Democrat narrowly re-elected last year on a no-tax pledge. By describing the cap as absolute, he left little doubt Thursday that he sees the cap as a political aid to keeping that promise.

“We have a spending cap. There’s no more room. Get used to it. This is about what we can do collectively. How we can spend the dollars that we have the best way we can,” Malloy said. “That’s what this budget discussion needs to turn to at this point. It’s not about revenue, it’s about a spending cap.”

Malloy made his remarks in his office at a meeting he sought with reporters to talk about budget realities, as he sees them, and to defend what legislators have complained has been six weeks of disengagement on the state’s fiscal challenges.

He spoke two days after House Democrats talked in a closed-door caucus about restoring hundreds of millions of dollars in spending cuts proposed by Malloy.

They acknowledged the cap is an issue. In fact, Malloy’s own proposal appears to exceed it, raising the prospect that it will have to be cut, not increased.

The governor said he sees no serious effort to revise what elements of state spending are covered by a spending cap, something his own administration did in his first term.

He is correct that none has been offered publicly. It is an open secret at the State Capitol, however, that Democratic legislators and social-service advocacy groups have been exploring whether the cap can be amended or otherwise bypassed.

But the cap is not the only obstacle to raising more revenue.

With an 87-64 majority in the House, as few as a dozen dissenting Democrats can block a tax increase or any other legislative action. In the Senate, where Democrats hold a 21-15 majority, at least three Democrats are viewed as unlikely to accept a tax increase.

Malloy said the only realistic options for legislators are restoring some cuts, but only if they trim elsewhere.

Malloy’s message comes as legislators have accused the normally activist governor of proposing his budget, then withdrawing.

The governor insisted Thursday that his disengagement was strategic, a recognition that legislators needed the same time his administration took to recognize that the budget for the biennium that begins July 1 will require painful cuts.

“It’s now time. You’ve had it for six weeks. You’ve examined it. You understand the revenue side. You understand what the spending cap is, or at least your leadership should understand it,” Malloy said. “Let’s get a budget. Let’s get it going. Let’s do our jobs. Let’s stop bemoaning the situations we’re in and turn ourselves to the really hard work of finalizing a budget.”

Malloy’s budget proposal raises taxes by expanding what is subject to the sales tax and by curtailing tax credits now enjoyed by business. The line he has drawn is opposition to raising tax rates, such as the income tax on high earners.

Asked Thursday what he considered a tax increase, he gave a three-word answer: “A new tax.”