House Democrats step off on long, difficult road to a state budget 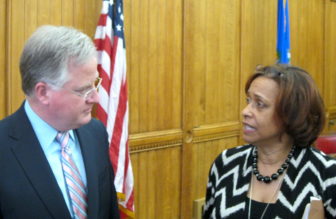 Majority Democrats in the House of Representatives tried Tuesday afternoon to get their arms around the daunting deficits facing state finances.

But after two hours behind closed doors, they left still trying.

Sources said many members of the caucus, which controls 87 of 151 House seats, are seeking to add hundreds of millions in spending to the $40 billion, two-year budget Gov. Dannel P. Malloy proposed on Feb. 18.

That could be a problem, though, given that the governor’s plan already fails to comply with the constitutional spending cap.

And even if that legal obstacle can be resolved, Democrats also haven’t reached consensus on an even bigger question: How to pay for the budget the legislature must pass.

“I don’t think there’s any consensus yet” on most of the big budget questions, House Speaker J. Brendan Sharkey, D-Hamden, said afterward.

And though the speaker declined to talk about specifics discussed during the closed-door meeting at the Capitol, he did predict that the final plan lawmakers will send Malloy later this spring “will start with our core Democratic principles.”

“We have to protect those who need protecting,” Sharkey said.

The plan Malloy delivered to lawmakers spends hundreds of millions less on social services and health care than is necessary to maintain current services.

“We have to be able to see the long term” in the new budget, Sharkey said. This, he said, means ensuring proper investments in education, economic development, saving adequately to meet retirement benefit obligations for workers, and maintaining a tax policy that encourages job growth.

Again though, that could be difficult. Democratic leaders on the Finance, Revenue and Bonding Committee already have expressed fears that the corporation tax increases Malloy proposed — which center on new restrictions on tax credits — could weaken Connecticut’s economic recovery.

“Some of the things in the governor’s budget are a retreat from” core party principles, Sharkey said. “…We’re starting our own budget. We’re going to rebuild the budget as Democrats.”

But Walker, whose panel will develop the spending portion of the legislature’s budget, said the caucus showed rank-and-file lawmakers clearly are paying close attention to the deep social service cuts Malloy proposed.

Walker declined to speculate how House Democrats might deal with the spending cap.

But the top Republican in the Senate, Minority Leader Len Fasano, R-North Haven, said he expects that Democrats are scrambling aggressively for loopholes to circumvent the cap.

The 1991 General Assembly tried to temper outrage over enactment of the state income tax by drafting a statutory spending cap. Voters would add the cap requirement to the state Constitution one year later by adopting the 28th Amendment.

The cap is supposed to keep most state spending increases in line with the annual growth in personal income or inflation.

The legislature and governor can exceed the cap legally. But it takes a 60 percent vote of approval in both chambers, and Democrats – though in the majority – couldn’t hit the 60 percent mark in either chamber without some GOP votes.

Both Fasano and House Minority Leader Themis Klarides, R-Derby, have said repeatedly that their respective caucuses wouldn’t support such a move.

In an effort to avoid exceeding the cap in recent years, Malloy and the Democratic majority have used borrowing and other techniques to move more spending outside of the budget – and thus out from under the cap.

“You can see what that does,” Fasano said. “It keeps the state in economic peril.”