Hoping to rally public opposition to $2.4 billion in proposed new tax revenues for the next two fiscal years, Republican state legislators will conduct a public hearing next week that GOP leaders argue should have been held weeks ago.

Republicans, who hold minorities in the House and Senate, are hoping their May 11 hearing will exert enough public pressure to do what their votes alone cannot — block most, if not all, of these proposed increases.

The hearing, scheduled for 1:30 p.m. in the Legislative Office Building, will focus largely on changes proposed to the state’s two largest taxes — income and sales — by the Democrat-controlled Finance, Revenue and Bonding Committee..

“Families and businesses will get absolutely slammed by these massive tax hikes and new taxes if they pass,” Senate Minority Leader Len Fasano, R-North Haven, said. “Republicans are giving everyone in our state a voice. We want the people to tell their elected officials exactly how they feel about another possible huge tax hike and new taxes.”

“Enough is enough. No more,” said House Minority Leader Themis Klarides, R-Derby. “Republicans have proposed a thoughtful, balanced alternative budget which does not raise taxes and which protects our most vulnerable residents.”

Malloy and his fellow Democrats in the legislature’s majority ordered more than $1.8 billion in tax hikes in 2011 to help close a record-setting $3.7 billion deficit built into 2011-12 finances by former Gov. M. Jodi Rell and by the 2010 General Assembly.

The finance panel now is trying to close another major deficit, albeit not as large as the fiscal hole four years ago. For the past 12 months, nonpartisan analysts have been projecting a $1.3 billion shortfall for the 2015-16 fiscal year, though updated revenue estimates released last week worsened that deficit to $1.4 billion.

In response to that problem, the finance panel endorsed not only income and sales tax increases, but also is seeking more revenue from corporations, hospitals, and insurance companies. This provides enough funding, according to fiscal notes, both to stabilize state finances and to support the spending plan recommended by the Appropriations Committee — which reverses most of the deep cuts to social services recommended by Malloy.

But many of the tax changes recommended by the finance panel were not discussed at public hearings earlier in the regular 2015 General Assembly session, which adjourns on June 3.

More than $500 million in new revenue would be raised over the next two fiscal years combined under the finance committee plan through two types of income tax hikes on the wealthy:

Another dramatic change proposed by the finance panel involves a plan to shift a big share of sales tax receipts to cities and towns.

While the overall sales tax rate drops slightly over the coming biennium, the range of services subject to the tax would be broadened considerably, particularly including services relied on by businesses.

The 6.35 percent sales tax rate changes in two stages. On Oct. 1, 2015, the rate as far as consumers are concerned remains the same. But the sales tax would be split into a state rate of 5.85 percent and a municipal rate of 0.5 percent. And on July 1, 2016, the state rate would drop again to 5.35 percent. Combined with the municipal rate, the effective rate charged to consumers would stand at 5.85 percent on July 1, 2016.

More than two dozen services would be subject to the full sales tax including:

The plan would raise slightly more than $1 billion in new sales tax receipts over the next two years combined, with about 40 percent going into the state’s coffers and 60 percent going to cities and towns.

Fasano and Klarides also have created a online petition to oppose the finance committee plan at www.nonewCTTaxes.com 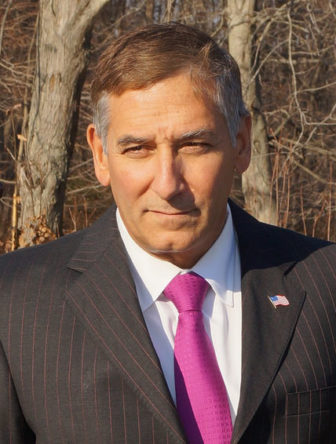 Malloy and the legislature’s Republican minority, have proposed very different budgets for the next two fiscal years.

The governor’s plan imposes deep cuts on social services. It also seeks a much smaller net tax increase of about $360 million over the next two fiscal years combined. Specifically it boosts corporation and hospital taxes while lowering the sales tax rate in two stages. The governor’s plan also delays or cancels close to $500 million in tax cuts that had been approved during the last term and were supposed to start in 2015-16.

The Republican budget, also restores many of the social service cuts recommended by Malloy, but does so by insisting upon a third round of concessions from state employees, who approved givebacks in 2009 and 2011.

State employee unions already have said the next budget deficit needs to be closed with more revenue, and not with concessions, raising the prospect of significant layoffs if the GOP plan were implemented.

The Republican budget recommends about $270 million in net tax cuts over the coming biennium, led by restoration of a sales tax exemption on clothing costing less than $50.

The GOP plan does postpone $228 million in tax relief, though, for consumers, corporations and for single income tax filers.

And the budget proposals from the Republicans and from Malloy both are now out of balance — through no fault of their own.

Both plans were developed before new revenue estimates for the upcoming two year budget were prepared last week.

Based on those updated estimates, both plans are now more than $200 million in deficit over the next two years combined.

House Speaker J. Brendan Sharkey, D-Hamden, said the solution to Connecticut’s budget challenges does not rest with breaking existing contracts, adding that the GOP is “not being serious about meeting the needs of Connecticut families. Unlike the so-called Republican alternative, the legislature’s committee budget remains the only proposal that is balanced and protects hard-working families by asking millionaires and billionaires to pay a little more.”

“We will not participate in the Republicans’ political theater,” Senate Democratic Caucus spokesman Adam Joseph said. “The Republicans should hold a hearing on their unrealistic budget that proposes a half billion dollars in Rowland-esque cuts to Connecticut’s workforce. The Democrats’ budget is balanced and will result in quantifiable tax relief for Connecticut’s hardworking middle-class families and small businesses. It provides new aid to cities and towns while at the same time capping municipal property tax growth.”