Partisan budget debate heats up at the state Capitol 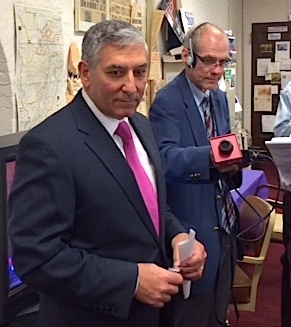 The partisan game of budget show-and-tell, or don’t-show-and-don’t tell, heated up at the state Capitol once again on Wednesday.

“If, in fact, there was a serious conversation about our budget by the majority, or by the governor, it would seem to me that that would be a responsible thing to do,” Fasano said.

He added that, “We have already started on that process” of re-balancing the alternative budget.

Senate and House Republicans unveiled their $39.5 billion, two-year budget proposal on April 24. That plan is now $227 million out of balance, according to nonpartisan analysts, based upon revised revenue projections issued April 30.

That forecast similarly punched a $215 million hole in the biennial budget Gov. Dannel P. Malloy proposed in February. The governor proposed a modest tax increase and cuts in social services and education.

The two-year plan offered by the legislature’s Democratic majority — which also averts the social service cuts and would boost state and municipal taxes by about $2.4 billion— remains in balance. Democratic lawmakers built a surplus into their plan in anticipation of the declining revenue forecast.

Both Malloy and his fellow Democrats in the legislature’s majority have called the Republican plan unachievable, noting that labor leaders have indicated workers aren’t interested in granting their third round of concessions since 2009.

Republicans are holding a public forum Monday to rally opposition to the Democrats’ tax hikes. And Democrats said that if the GOP still insists it has a viable alternative, it should at least reflect updated revenue estimates.

Senate Democratic Caucus spokesman Adam Joseph responded that Fasano was offering a “Nixonian bargain where they will only tell us how they are going to balance their budget if we first endorse their budget without all of the details.”

Joseph added that “we put all of our cards on the table. Both parties agreed to protect social services. The big difference is: the Democrats produced an honest plan to pay for it.”