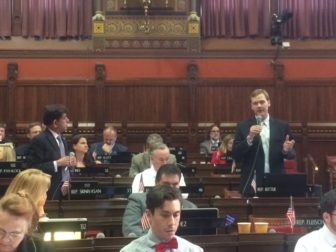 Inspired by the California measles outbreak, the Connecticut House voted 86 to 56 Thursday to require parents to annually declare if they are refusing to vaccinate their children on religious grounds.

Legislators debated whether the requirement was a small step toward boosting Connecticut’s already high childhood immunization rate of 98.5 percent — or the bullying of a parental minority.

By formalizing the exemption process, the state would create a moment every year for parents to reflect on the potential consequences of leaving their children unprotected from preventable diseases, said Rep. Matthew Ritter, D-Hartford, co-chair of the Public Health Committee

“It’s a chance to consider the seriousness of this,” Ritter said.

Under current law, parents need to sign a form once, before their children enter public school or day care, stating a religious objection to vaccinations. The bill would require annual statements, signed before a notary, attorney, justice of the peace, court clerk, judge or family magistrate.

One after another, legislators of both parties rose to denounce the measure as an overreaction to an outbreak of measles among unvaccinated children in California. Many said they were swamped by emails in opposition.

“I am disappointed the state of Connecticut is having to join in this hysteria that started a few months in California,” said Rep. Jack Hennessy, D-Bridgeport.

“All it accomplishes is to create another hurdle, another nuisance for a segment of our population that feel very passionately and want to assert a right to protect their children,” said Rep. Vincent J. Candelora, R-North Branford.

“Something tells me this is just big government trying to be bigger government,” said Rep. Mitch Bolinsky, R-Newtown, who called the bill a “form of intimidation” and “bullying.”

“To me, this bill is a form of harassment,” said Rep. Daniel S. Rovero, D-Killingly.

Candelora, Bolinsky and Rovero said their own children were vaccinated. While Candelora expressed some doubt about the efficacy and safety of all vaccines, he said those issues were not at the center of the debate.

“I don’t believe this is a public health issue as much as it is a parental rights issue,” Candelora said.

Rep. Noreen S. Kokoruda, R-Madison, rose as the grandmother of a 13-year-old autistic child. Kokoruda said her daughter, the child’s mother, blames the autism on a vaccination, a belief that Kokoruda says flies “against all science.”

But she nonetheless found the bill’s requirement of formally attesting a religious objection before a third-party to be intrusive.

“This is very personal. This is very private,” she said. “I think this is between a family and the school system and their doctor.”

Rep. Fred Wilms, R-Norwalk, one of the few to speak in support, said the bill reflected a “compelling interest in protecting public health.”

“I do not believe this annual acknowledgement is burdensome,” Wilms said. “It is straightforward.”

None of the world’s major faiths have explicit prohibitions against vaccinations.

Rep. Dan Carter, R-Bethel, who opposed the bill, says religious objections are asserted in Connecticut because it is the only basis allowed under law to avoid immunizations, other than a specific health reason. He called it a “dirty secret.”

In public hearing testimony, Dr. Stephen Updegrove of the Connecticut Children’s Vaccine Advisory Council had urged the legislature to go further by requiring that parents invoking a religious exemption show they “are practicing members of an organized faith that actually believes in proscribing immunizations, that the tenets of this faith extend to all immunizations and that they be required to have a leader of that faith attest to the existence of these tenets and the participation in this faith by those seeking the exemption.”

Such a show of proof is not in the bill, which now goes to the Senate.

The bill passed on the votes of 73 Democrats and 13 Republicans, including the only physician in the legislature: Rep. Prasad Srinivasan, R-Glastonbury.