Study: I-91 casino best bet to keep gamblers in CT 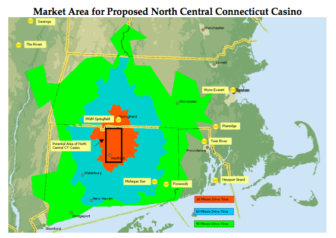 A casino in the I-91 corridor north of Hartford could recapture nearly 53 percent of the Connecticut gambling dollars that otherwise would be lost to the MGM Springfield casino, according to a study released Thursday.

The study commissioned by the Mashantucket Pequots and Mohegans is the latest asset deployed by the tribes in their effort to lobby the General Assembly for permission to build the first casino outside their tribal lands.

While the bill pending in the Senate would authorize up to three casinos, the tribes and their legislative allies have narrowed efforts to a single facility in northern Connecticut that could compete with MGM Springfield.

“The MGM Springfield casino is really the spider hanging over the state,” said Clyde Barrow, author of the study.

Kevin P. Brown, tribal chairman of the Mohegans, said simultaneously locating, designing, financing and constructing three casinos at $300 million each would be a “monumental” undertaking for the tribes.

“Make no mistake about it, it would be a difficult task,” Brown said.

Senate President Pro Tem Martin Looney, D-New Haven, already has said that if the Senate passes a casino bill this year, it most probably would authorize one facility to compete with Springfield.

The report by Barrow, an academic who has long analyzed the economic impacts of the casino industry in the northeast, concluded that an I-91 casino was Connecticut’s best bet at preserving share of the gambling market.

The Pequots’ Foxwoods Resorts Casino and the Moghegan Sun in eastern Connecticut are the two largest casinos in North America, but their gambling duopoly has been shattered by competitors in New York, Rhode Island and, most recently, Massachusetts.

MGM Springfield is under construction and slated to open in 2017, and Steve Wynn has a license to build a gambling resort in a northern suburb of Boston.

The competition has meant a steady erosion of jobs and revenue at Foxwoods and Mohegan Sun since their peak year of 2006. The state, which collects 25 percent of gross slots revenue, has seen its annual cut fall from more than $400 million to less than $300 million.

Barrow’s study said a casino in north-central Connecticut would generate annual gross gambling revenue of $300.9 million and $36.1 million in non-gaming revenue by 2019. It would have a payroll of $116 million.

If the state took 25 percent of gross gaming revenue, it could expect $75.2 annually, plus an estimated $2.7 million in sales taxes, Barrow said. The state’s actual share of revenue would be subject to negotiation.

The new casino would have 2,000 slot machines, 50 table games, a poker parlor and food and beverage service, but no hotel or entertainment venue. Barrow said the facility would be the size of an average casino in Atlantic City.

“We’re not talking about ‘slots in a box’,” Barrow said, a reference to bare-bones slots parlors.

The bill originally envisioned three casinos strategically positioned to capture gamblers on their way to Massachusetts and New York. One would be north of Hartford off I-91. The others would be near Danbury off I-84 and in lower Fairfield County off I-95.

If all three were built, the projected revenues at the I-91 casino would drop as it lost customers to other Connecticut facilities.

Barrow focused on the I-91 communities between Hartford and the Massachusetts border, but a developer has proposed converting the vacant Showcase theater complex off I-84 in East Hartford to a casino.

The East Hartford site would have the advantage of proximity to Hartford and its larger suburbs, but the disadvantage of not being on I-91, Barrow said.

“I think those two factors even out,” he said.