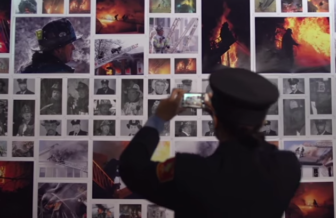 A Boston firefighter photographs a memorial to colleagues who died from cancer.

The House Republican minority controls the fate of a heavily lobbied labor bill that would expand workers’ compensation coverage in Connecticut by declaring some forms of cancer to be an occupational hazard of firefighting.

Normally, that would mean certain defeat of a proposal to create a new benefit for public employees and volunteer firefighters that cities and towns strenuously oppose as an unfunded mandate with hard-to-calculate costs.

But the GOP is expected to offer a compromise this week, one that would narrow the scope of the broadly written bill, while still acknowledging evidence linking some cancers to the chemicals released through combustion.

“The Republicans did not divulge the scope of what they are looking to change. We’ll sit down and talk to them. At least they are looking at it,” said Rick H. Hart, political director of the union representing 4,000 paid firefighters in the state. “They’re not just saying, ‘No.’ ”

House Speaker J. Brendan Sharkey, D-Hamden, says he has told Hart’s union, the Uniformed Professional Fire Fighters Association of Connecticut, he won’t schedule a vote until the association demonstrates having the votes for passage.

With an unspecified number of Democrats opposed, Hart concedes the threshold can’t be reached without GOP votes in the 151-member House, where Democrats hold an 87-64 majority.

The legislation would create a rebuttable presumption for paid and volunteer firefighters that many forms of cancer are work-related, making them eligible for workers’ compensation benefits, such as lost wages due to any partial, temporary or permanent disability.

Retired firefighters could apply for compensation for cancer diagnosed within five years of retirement.

The bill arrived at the State Capitol with a strong, sympathetic narrative: Firefighters say Connecticut is one of a minority of states that has not recognized some type of cancer-firefighting link in its workers’ compensation laws.

Two widows of firefighters who died from cancer testified at a public hearing in February about the financial hardship of lost wages while their husbands were being treated. A retired Waterbury firefighter and a firefighter-paramedic with the Town of Manchester told legislators about cancer clusters in their departments.

“I hope it shocks you to learn that, currently, there are six of us who have or have had cancer and are still healthy enough to be able to continue working in a department of just 65 firefighters,” said Jubenal Gonzalez, a Manchester paramedic.

But the Council of Small Towns and the Connecticut Conference of Municipalities, the two lobbying associations representing municipalities, have made a priority of killing a bill that local officials say exposes local taxpayers to incalculable costs.

“There are so many unknowns on this,” said Scott Shanley, the town manager of Manchester. “It’s a totally unpredictable piece of legislation. I think that’s probably one of the things that is of the most concern to me, that we just don’t know about cancer well enough to be able to make these kinds of determinations.”

The municipalities say the cancer bill, by presuming that cancers are job-related, resurrects the similar heart-and-hypertension benefit, which presumed that all heart disease for public safety workers was job related. The presumption was later discredited and repealed, though towns still are paying claims awarded before repeal.

A single cardiac claim could cost a town $500,000 to $1 million, according to the legislature’s Office of Fiscal Analysis. The office has not been able to fully estimate the potential cost of the cancer bill.

Gov. Dannel P. Malloy, a former mayor, told The Mirror late last week he has yet to study the legislation in detail, but he expressed a wariness about the concept.

“Our fire departments, our cities, our municipalities have very good disability programs, very good insurance programs. So before I opine, I’d have to understand what they’re trying to accomplish beyond what already has been accomplished with respect to disability and disability retirements,” Malloy said. “I’d want to know why is that not enough.”

Legislators have begun to view the bill as heavy with political risk: No one enjoys the prospect of voting against firefighters struggling with cancer, yet some are spooked by the prospect of saddling towns with an unfunded mandate.

A bill that carries about 50 co-sponsors and was endorsed unanimously by the legislature’s Labor and Public Employees Committee stalled.

“We are sympathetic to our firemen, absolutely,” said Rep. David Rutigliano, R-Trumbull, ranking Republican on the Labor and Public Employees Committee. “But the longer that bill stays out there, the cries of ‘municipal mandate’ grow louder.”

Republicans are exploring whether they can narrow the types of cancer that would be covered. They also are looking at various funding mechanisms, especially for volunteer departments.

“It started out much more broadly,” House Minority Leader Themis Klarides, R-Derby, said of the bill. “It’s been narrowed down to the point where I think it’s a legitimate conversation, okay?”

Proponents of the bill point to various studies that have shown firefighters with higher rates of testicular cancer, multiple myeloma, and Non-Hodgkins lymphoma, among other forms of the disease.

The Centers for Disease Control, summarizing a long-term study of the incidence of eight types of cancer among firefighters in Chicago, Philadelphia and San Francisco, found a “slight, but statistically significant” increase in the risk for lung cancer and leukemia.

“These findings contribute to the evidence of a causal association between firefighting exposures and cancer,” the CDC said. “Nevertheless, the relatively small effects observed in this study merit cautious interpretation given increased susceptibility to potential biases that may be present. Future studies that continue to explore these findings in this and other cohorts will improve our understanding of cancer risks in the fire service.”

Municipal officials seized on the caution and the call for further study.

Fire departments nationally are taking the cancer risk seriously. They see no need to wait for further study before training personnel to keep on air masks even after smoke subsides, and to scrub gear of contaminants.

In Boston, the department paid for an eight-minute video that is both an unusual training tool and a memorial to the 160 city firefighters who have died from cancer since 1990.

The goal of the video is to remind firefighters of an invisible danger that remains in the air after the smoke has cleared: benzene and other byproducts of combustion. It is a reminder to leave on an air mask.

“You need to wear your mask, that’s the message I want to deliver to all Boston firefighters right now,” says Commissioner Joseph E. Finn, who commissioned the video. “You need to keep that mask on your face, and you should be thinking about your family when you go to take it off.”

In Massachusetts, any cancer affecting the skin, central nervous, lymphatic, digestive, hematological, urinary, skeletal, oral, prostate, lung, or respiratory systems is presumed to be job-related in a firefighter.

Over the course of the video, widows and colleagues of firefighters struck by cancer, a number that grows by 20 every year, place pictures of the fallen on a wall. The pictures grow into a massive mural.

Kevin McNiff, a firefighter with inoperable liver and lung cancer, talks about “macho crap,” the culture that made old-timers reluctant to accept air packs when they were first introduced and still causes many firefighters to remove masks too early while fighting a fire.