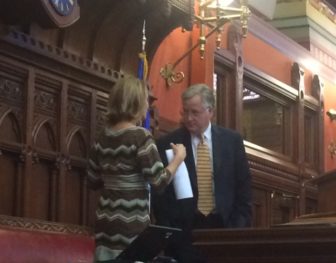 Expanded workers’ compensation coverage for police and firefighters, one of the most heavily lobbied issues of the 2015 session, is likely to die from inaction in the House of Representatives, legislative leaders said Wednesday.

The bill passed last week by the Senate would declare many forms of cancer to be an occupational hazard for firefighters and give police officers coverage for post-traumatic stress disorder in limited circumstances.

House Speaker J. Brendan Sharkey, D-Hamden, and House Minority Leader Themis Klarides, R-Derby, told The Mirror in separate interviews that the bill is unlikely to come to a vote before the constitutional adjournment deadline of midnight June 3.

The bill is one that many legislators would like to see set aside as it forces them to either disappoint police and firefighters or anger municipal officials, who say the unfunded mandate for expanded workers’ compensation coverage could be costly to cities and towns.

“I don’t think it will have the votes, frankly, at least in our caucus,” Sharkey said.

The Senate surprised House members by combining in one bill two workers’ compensation issues: creating a rebuttable presumption for firefighters that certain cancers are job-related, and restoring limited coverage for mental stress for police officers.

“I know the speaker is committed, as am I, to working on them between now and next year,” Klarides said of the cancer and PTSD issues. “but I think the most responsible way to do it is study it.”

“I think the proponents of the firefighters’ bill make this argument that the science has come a long way, that we can track these things more directly,” Sharkey said. “I’m also concerned that may not be reflected in the language of the bill.”

Sharkey and Klarides each said the cancer coverage was too broad, extending to cancers whose link to firefighting was uncertain. The scope of the bill was broad, covering 4,000 paid firefighters and many of the state’s 22,000 volunteer firefighters.

Municipal leaders pressed their case against the legislation at a late-morning press conference.

Rick H. Hart, the political director of the Uniformed Professional Fire Fighters Association of Connecticut, after learning of Sharkey’s reservations late Wednesday, said that the union was taking a head count in the House to gauge if passage still was possible in 2015.

The bill would require coverage for post-traumatic stress suffered by police responding to certain types of fatalities, a change inspired by the school shooting at Sandy Hook; for firefighters, many types of cancer would be presumed to have arisen from on-the-job exposure to chemicals from combustion.

Klarides said linking PTSD coverage to types of incident — fatalities caused by humans, other than suicides or motor vehicle accidents — and not symptoms was an odd approach. Both said legislators need more scientific data about the links between firefighting and cancer.

“It’s important we get it right,” Sharkey said.

The bill would create a rebuttable presumption for firefighters that Kahler’s Disease, non-Hodgkin’s lymphoma or any cancer affecting the brain, skin or the digestive, reproductive, endocrine, respiratory, lymphatic, urinary or hematological systems are job-related.

Proponents of the bill point to various studies that have shown firefighters with higher rates of testicular cancer, multiple myeloma, and non-Hodgkins lymphoma, among other forms of the disease.

The Centers for Disease Control, summarizing a long-term study of the incidence of eight types of cancer among firefighters in Chicago, Philadelphia and San Francisco, found a “slight, but statistically significant” increase in the risk for lung cancer and leukemia. It called for further study.