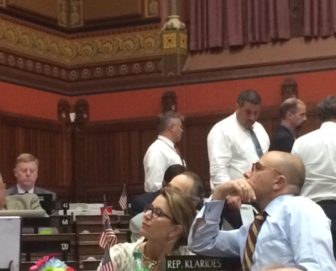 The House of Representatives overwhelmingly voted Thursday night for sweeping campaign finance reforms offered by the GOP minority, a bipartisan gesture of protest directed at Senate Democrats reluctant to stem the flow of big money into publicly financed campaigns.

On a vote of 134 to 12, the House endorsed a measure that would strip state parties of their ability to funnel an unlimited stream of $10,000 donations to candidates who ostensibly agree to $100 contribution limits in return for taxpayer-funded campaigns.

House Speaker J. Brendan Sharkey, D-Hamden, who controls the House agenda, allowed a vote on the Republican measure knowing it would die without a vote in the Senate. He declined to comment on the unusual gesture, but he previously has expressed frustration with the Senate.

If the vote was a calculated dig at the Senate in the waning days of the 2015 session, it provoked no public response on a night when the leadership was primarily focused on budget negotiations.

“I think what they did was too inside baseball, even for me,” said Senate Majority Leader Bob Duff, D-Norwalk.

The Republican amendment to an unrelated campaign bill would reverse changes in campaign finance law authored by Senate Democrats in 2013 in response to a super PAC that ran attack ads against its members late in the 2012 campaign.

To provide a degree of protection from super PACs, the legislature abolished a $10,000 cap on coordinated expenditures the state parties can make on behalf of candidates. It also doubled the $5,000 limit on contributions to the parties.

The 2013 revisions undermined two principles of the state’s voluntary program of publicly financing campaigns: in return for public grants, candidates had to agree to accept contributions of no more than $100 and abide by strict spending limits.

It created a path by which donors could contribute $10,000 through the party to a candidate.

In the case of Sen. Ted Kennedy Jr., D-Branford, it allowed him to accept nearly $94,000 in public financing for his first campaign last year, yet also benefit from $205,000 from the state party and $60,000 from Senate Democratic political action committees.

Sharkey sought to impose a new cap of $25,000 on party expenditures. The Senate countered with a $250,000 cap, which wouldn’t have affected any campaign last year.

“Frankly, that’s not real meaningful reform, as far as I am concerned,” Sharkey said in an interview earlier this week. “The Senate and House do have very differing views of what we should do and what we need to do. And until and unless we can get an agreement on that, I’m not sure with time running short we’re going to have a lot of interest in running something.”

But he accepted a Republican request for a vote on a package of reforms the GOP first outlined in January. They would cap expenditures that state parties can make on various types of races: $250,000 for governor, $75,000 for other statewide constitutional offices, $10,000 for state Senate, and $3,500 for state House.

They also would eliminate public grants for unopposed races, reduce grants in other races by 25 percent and strengthen a prohibition against state contractor contributions.

Contractors are barred from donating to state races, but they were able to support the re-election of Gov. Dannel P. Malloy last year by giving to the state Democratic Party’s federal account, which paid for a get-out-the-vote effort and at least one mailer for Malloy.

The State Elections Enforcement Commission is investigating whether the federal account illegally was used to assist Malloy.

House Minority Leader Themis Klarides, R-Derby, who voted against the public financing law in 2005, said it was offered to restore public trust in government after the forced resignation of Gov. John G. Rowland in 2004 over his cozy relationship with state contractors.

“Unfortunately, since then we have seen a slow erosion of that trust,” Klarides said.

The Republican proposal also would prevent family members of candidates receiving taxpayer funding from being paid more than $1,000 from any publicly financed campaigns.

State law already bars candidates from hiring family members as consultants, but NBC Connecticut recently aired a report showing that two relatives of legislators worked as consultants for other candidates.

Rep. Kelly Luxenberg, D-Manchester, whose husband is a campaign consultant, voted for the bill.