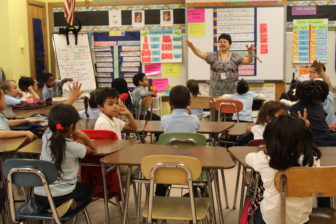 Is evaluation a dirty word in Connecticut’s public schools?

In Meriden, teachers seem to be embracing the state’s new teacher evaluation system.

“This is not a gotcha. This is supportive,” Katherine Lopez, a kindergarten teacher at Benjamin Franklin Elementary School, told the state panel that oversees evaluations.

Others are pushing back.

“The legitimacy is really in question by the rank and file. The teachers don’t trust this,” said Bruce Douglas, the leader of the Capitol Region Education Council, which runs inter-district magnet schools in the Hartford region.

Last year, researchers at the University of Connecticut’s Neag School of Education reported that only 58 percent of teachers surveyed felt the rating they received from the state’s new evaluation system was accurate. Of the 533 teachers surveyed, more than half found no added value in the time they spent on their evaluations.

Wednesday, the state panel that is responsible for the implementation of the new evaluations — the Performance Evaluation Advisory Council — met for the fifth time since they created the evaluations three years ago.

The mission: figure out ways to instill confidence in a teacher evaluation system by ensuring it is used to improve the profession and learning among students. Presentations were made on what the department is doing to ensure the efficacy of districts’ evaluations and adopted standards that ensures teachers have access to career development opportunities.

She is well aware of success stories, as well as the objections, various districts face. But educators are well aware of the law, which requires the results of these evaluations to eventually be linked to tenure and dismissal decisions.

“We hear different stories from different districts,” she said, pointing out that administrators need to earn the trust from their teachers that these ratings are valid. “It’s certainly true that the type of relationships need to grow.”

Drama and controversy has surrounded how public school teachers are evaluated since 2012, when Gov. Dannel P. Malloy got legislators to change state law so that ratings can be used to make tenure and dismissal decisions.

“In today’s system, basically the only thing you have to do is show up for four years. Do that, and tenure is yours. The bottom line? Today tenure is too easy to get and too hard to take away,” the Democratic governor told legislators during his state of the state address. “If you want to keep that tenure, you should have to continue to prove your effectiveness in the classroom.”

Since those remarks, the state has adopted evaluation requirements that provide for nearly one-quarter of a teacher’s grade to be linked to how his or her students perform on standardized tests. The state’s 40,000 teachers will also be evaluated on the results of announced and unannounced classroom observations and anonymous parent or student surveys, if their local school board decides to use surveys to fulfill the feedback requirement.

But the state has yet to link those evaluations to tenure and dismissal decisions. The state’s implementation of a new battery of standardized tests, known as the Smarter Balanced Assessments, has stalled that effort since there is no baseline in which to compare a teachers’ progress.

The state has asked the U.S. Department of Education for permission to push back linking the evaluations to tenure and dismissal decisions until at least the 2016-17 school year. The state is expecting to hear back any day whether that request will be approved as part of its request from the rigid requirements of the federal laws governing education, known as the No Child Left Behind Act.

In the first year of the evaluation, the 2012-13 school year, the UConn researchers report that nearly 96 percent of the teachers graded in the districts they looked at were rated as “proficient” or “exemplary.” However, 4 percent were rated “developing” and fewer than 1 percent “below standard” — the lowest ratings possible.

The State Department of Education declined the Mirror’s request for aggregate ratings since the UConn report. A spokeswoman said Wednesday the department is currently reviewing whether such information is subject to the state’s Freedom of Information Act under current law.

In Meriden, the principal of Lopez’s school said teachers trust the new evaluation system because it was tailored and developed by a diverse panel of educators.

“It’s being vetted by everyone using it,” said David Levenduski.

But the president of the state’s largest teachers’ union said evaluation is not such a jolly situation in other districts.

“Until trust can be instilled in every district, it will remain a bad word,” said Sheila Cohen of the Connecticut Education Association. “In many of our districts, the word developing leads to termination. And so it’s not OK.”