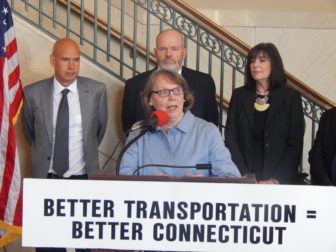 It was hailed as “historic” and “transformative” – a new, two-year state budget that would make unprecedented investments in communities and transportation.

Lost among the accolades bestowed by Gov. Dannel P. Malloy and Democratic legislative leaders was that those investments would be delayed. No substantive amount of money would be spent until the second year, with the big money paid out three years from now.

Even worse, a major deficit – almost twice the size of the new investments – arrives just as those big payouts are due in July 2017.

And while Malloy insists his transportation investment will be protected by a legal lockbox, and Democratic lawmakers profess their commitment to local aid, advocates for both constituencies admit they’re worried.

“Transportation projects don’t get done in two years. You need a definite, guaranteed flow of money. And if they’re having a hard time with the budget now, I don’t know,” said Karen Burnaska, who served on the former state Transportation Strategy Board. “There is definitely a concern about what will happen in the long-term.”

“While very appreciative, local officials have concerns about the longevity of (municipal aid) funding,” said Robert Labanara, director of public policy and advocacy for the Connecticut Conference of Municipalities. CCM requests stronger assurances that would guard against future reductions.”

Why are new funds for transportation and communities seen as at-risk?

The legislature’s Office of Fiscal Analysis projects this plan, after adjustments for inflation, economic growth and other factors, would run $832 million – about 4.2 percent – in deficit in 2017-18, the first year after the coming biennium. And in 2018-19 there’s a shortfall of $732 million.

Legislators and the governor have been more focused on wiping out a larger and more immediate shortfall. The new budget is designed to close estimated deficits topping $1.4 billion next fiscal year, and $1.5 billion in 2016-17.

So while Malloy and the legislature’s Democratic majority wanted to do more for transportation and municipal aid, it was difficult to do much right away and still close those deficits.

But because of the deficit, the new budget also cancels other general fund resources owed to transportation under current law.

The municipal aid program also transfers sales tax money to cities and towns — but with a delay.

The budget reserves $159 million from the first year’s receipts, but doesn’t transfer them to communities until the second year.

Similarly, $277 million is set aside in the second year, but not given to local governments until 2017-18, the first year after the new biennium.

Transportation would not get its full share of the sales tax until three years from now. Cities and towns would wait four.

Can those promised investments be delivered?

“I think that is the concern we are going to have going forward,” said Sen. John Fonfara, D-Hartford, co-chairman of the Finance, Revenue and Bonding Committee.

Though he conceded the deficit projection is significant, Fonfara also said Democratic legislators are committed to preserving these investments, adding that the municipal aid is vital to ease property taxes, particularly in Connecticut’s cities.

“Both are essentially off-limits (to budget cuts) going forward,” he said. “I believe that is the case.”

“To those who might doubt that funding for our plan may fail to come into fruition down the road, we say this: ‘Don’t hold your breath,’” Malloy spokesman Devon Puglia said. “This governor has no intentions of ever rolling back major strides on transportation, which we can all agree — Republicans, Democrats, the business and non-profit communities, and everyday families — needs to get done.” 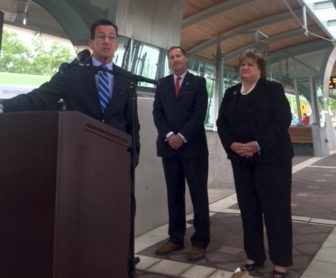 Puglia added that the investments are historic. “For generations, leaders failed to plan for the long-term, and for too many decades, our transportation system deteriorated. So the governor is taking action. For the first time, Connecticut will have a steady stream of revenue, locked into a fund, that will go towards transforming our infrastructure to boost business, grow jobs, and improve quality of life.”

But Sen. L. Scott Frantz of Greenwich, ranking Republican senator on the finance committee, said he understands the fears of transportation advocates and local officials.

“It’s a fine line, he said. “You don’t want to upset people to the point where they pack up and leave, but we’re in a fiscal pickle, and we need to do something about it now. I tell them (the budget outlook) is pretty grave.”

“We are already beyond the tipping point in transportation and we’ve got a lot of catching up to do,” he said.

Puglia said the governor expects the lockbox not only to be written into statute, but also a constitutional amendment, adding it “is important for the budget today, the budget tomorrow, all the norms and behaviors surrounding them, and the future of transportation broadly.”

Economists: Next deficit likely to get worse

Nonetheless, there are signs that this new deficit not only will be tough to avoid, but could get larger.

Just over 60 percent of that deficit projection three years from now, about $500 million, reflects surging costs in debt service, pensions and health care for current employees and retirees.

Part of that $500 million is tied to a commitment Malloy and the legislature made back in 2011 in exchange for union concessions.

Workers agreed to forfeit 3 percent of their pay to help cover their retirement health care, and the state agreed to match it — but not until July 2017. That alone represents almost $120 million of the deficit.

And two economists warned there is a strong likelihood that this shortfall will get worse.

Deficit forecasts assume economic changes, and this projection anticipates state income tax receipts — even before rate increases in the new budget are applied — will jump by 17.2 percent by 2017-18.

“That is extremely unlikely,” said University of Connecticut economist Fred V. Carstensen, who heads the Connecticut Center for Economic Analysis.

The CCEA issued a report back in February projecting that the state’s economy would boom, possibly by something close to 8 percent.

But Carstensen said Wednesday that his center would issue a new report next week retracting that assessment, which was based on federal Bureau of Econonic Analysis data which the federal think-tank revised drastically downward earlier this month.

“Basically all of that growth disappeared,’ Carstensen said. “Connecticut is not going to achieve very significant growth over the next two or three years.”

“Never before have I seen such a poisoned atmosphere,” Gioia said, adding that small and large businesses alike may curtail plans to hire or otherwise expand while more states try to lure Connecticut companies away.

“With all of that,” Gioia added, “how the heck do you get huge gains in income tax revenues?”