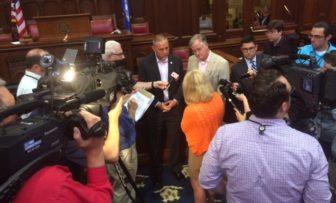 Leaders of the House Democratic majority were optimistic Tuesday they could resolve the new state budget next week, but couldn’t say what changes — if any — might be made.

House Democrats met for more than three hours behind closed doors to discuss last-minute revisions sought by Gov. Dannel P. Malloy as well as any legislators might want to make.

House Speaker J. Brendan Sharkey, D-Hamden, and Majority Leader Joe Aresimowicz, D-Berlin, withheld most details of the caucus. But they did say afterward that members have heard complaints tied to both spending and taxes in the new $40.3 billion, two-year budget legislators adopted just before the regular session ended on June 3.

“Our members and the Democrats in general are hearing the concerns of the public,” Sharkey said. “It’s our intention to address them.”

The speaker said House Democrats have heard complaints about hefty tax increases, particularly those aimed at corporations and hospitals.

And Aresimowicz quickly added that lawmakers also have heard appeals to preserve vital government services, as well as new investments in municipal aid and transportation.

The new two-year budget supposedly reflected an agreement negotiated by Democratic legislative leaders and Malloy. But the Democratic governor came back nine days after the session ended and sought to modify the deal.

As major corporations loudly protested a package that raises taxes $1.5 billion over two years — and cancels or delays almost $500 million in previously approved tax cuts — Malloy proposed reducing the biennial tax hike by $224 million, with nearly all relief aimed at businesses. This would be offset largely by cuts to social services, health care, municipal aid and higher education.

Malloy hasn’t signed the budget yet, but he wouldn’t necessarily have to veto it and start over from scratch to make changes. Legislators still have to come back into special session this summer to adopt an omnibus bill to implement policy changes in the new budget, and could make the modifications then.

Sharkey said tentative plans call for a special session on June 29 and 30.

Between now and then, he said, leaders of the Democratic majorities in the House and Senate would negotiate with the administration. Sharkey said he wasn’t sure whether he would hold another caucus to discuss details with rank-and-file House members before holding a vote.

Senate Democratic leaders have been discussing budget options in conference calls with their caucus members. 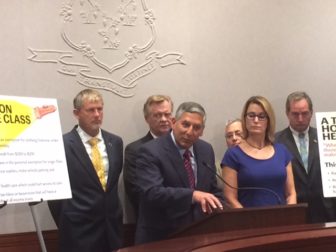 But regardless of whether any changes are made, it might be very difficult to get the so-called “budget implementer” bill passed.

The House narrowly approved the budget appropriations bill by a 73-70 vote. Democrats hold an 87-64 edge in the House, and 11 of their members joined with 59 Republicans to oppose the budget.

Another five House Republicans were absent because of illness or to deal with other personal obligations, House Minority Leader Themis Klarides, R-Derby, said Tuesday, adding she expected all 64 GOP representatives to be present next week — and prepared to vote against the budget implementer.

“They’re going to have to deal with 64 (Republican) ‘no’ votes on Monday,” she said.

Klarides and Senate Minority Leader Len Fasano, R-North Haven, continued to protest the fact that Malloy and Democratic legislators have excluded them from budget talks.

“What makes it worse is this (budget) was done in the dark of night with no transparency,” Klarides said. 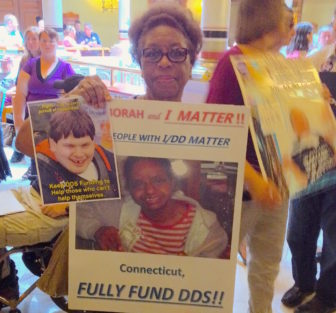 Velma Williams-Estes of Meriden holds a picture of her intellectually disabled daughter Deborah while urging lawmakers Tuesday not to make further cuts to social services in the new state budget.

“Even after it was voted on, people were learning about it,” Fasano said.

The GOP leaders also argued that, while the adopted budget imposes fewer social service cuts than Malloy proposed, it still harms the middle class, including $55 million in cuts in Medicaid rates and other health care programs that ultimately will lead more providers to stop treating the elderly and the poor.

“We need to take care of the people who need our help the most, and if the elderly aren’t in that group, then I don’t know who is,” Klarides said.

Democrats countered that Republicans have marginalized themselves by:

“The minority party doesn’t have to make the tough decisions,” Sharkey said. “They’re not the ones who have to be the adults in the room and pass a budget.”