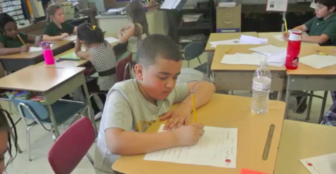 A student at DiLoretto Magnet School writes to Miss Kendra

The 5,000 letters students across Connecticut wrote “Miss Kendra” this school year are telling.

“When I get bullied I feel like I mean nothing to the world. I’m just a piece of trash,” Nuresh recently wrote.

“I am always getting angry. Almost everyone makes me super angry,” another elementary student at DiLoretto Magnet School in New Britain wrote the fictitious character created by trauma experts at the Post Traumatic Stress Center in New Haven.

Mental health professionals and teachers are using the letters sent to her to screen students in Bridgeport, New Britain and New Haven before they act out and get arrested or suspended at school.

“The current model we have is to wait and do nothing,” said David Read Johnson, a psychologist at the stress center and the creator of the Miss Kendra program. “This lets them express themselves before it becomes an aggressive behavior.”

These letters are just one of several initiatives aimed at identifying high-risk children early and getting them the support they need.

With a goal of reducing the number of young offenders incarcerated by 20 percent in three years, Connecticut will need to both prevent youths from entering the juvenile justice system and make sure they don’t return when they leave.

“Statewide reform efforts have not yet focused sufficiently on reentry of juvenile offenders from confined settings to their communities,” reads a one-page summary of the state’s request to the federal government for a grant to help Connecticut create a plan to improve the system.

The push to intervene early comes as the number of students arrested at schools throughout Connecticut rises.

Slightly more than 1,700 students were arrested at school during the academic year just ending, up 250 arrests from the previous year and the most since the state began keeping track four years ago.

Most of those arrested are black and Hispanic children from communities with high concentrations of poverty. Hundreds of children are arrested for nonviolent offenses, such as breach of peace or possessing less than a half an ounce of marijuana.

The number of young offenders being arrested in and out of school and referred to juvenile court each year has held steady at about 11,000. That number obscures some progress because state law has changed to put 16- and 17-year-olds who commit less serious crimes in juvenile courts instead of the adult criminal justice system.

Once children are in the state’s juvenile justice system, state officials and lawyers who represent these young offenders say too many obstacles work against turning their lives around:

Several state lawmakers are not satisfied that the state’s juvenile justice system is working.

“What is the value? Does it rehabilitate kids? Does it help kids? We haven’t gotten any answers,” said Rep. Toni Walker, co-chair of the Juvenile Justice Policy and Oversight Committee, a legislative panel created to investigate changes needed in the state’s juvenile justice initiatives.

While experts research the answers to Walker’s questions, advocates point to the rates at which young offenders again find themselves in trouble with the law as proof that the system needs an overhaul.

Sixty percent of young offenders on probation through the Judicial Branch will offend again or violate their probation within two years. At least 25 percent of those released from the Connecticut Juvenile Training School — the state’s high-security jail for boys — will end up back at the facility within the same calendar year.

The educational outcomes for these youths often aren’t favorable, either.

“This is an actual report card,” attorney Martha Stone told the oversight panel last week while showing them the report card of one of her clients on probation.

That seventh-grade student from Hartford received almost straight Ds and Fs for the entire school year.

“If this was my child, I would not let this happen,” said Stone, the leader of the Center for Children’s Advocacy who won a class-action lawsuit against the state in 1997 that forced the state to improve how youths in pre-adjudication detention are treated. 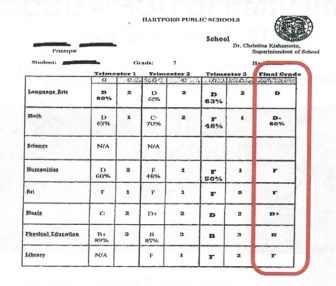 Advocates hope changes can be made to state law to help young offenders when the legislature reconvenes in special session soon and reconsiders the governor’s “Second Chance Society” initiative, which largely seeks to reform the adult criminal justice system.

One change — proposed by several members of the Black and Puerto Rican Caucus — would require that a child be provided an alternative education after being arrested and expelled from school.

“We’ve had so many kids that are caught with a pocket knife expelled and receive nothing” Smith, the attorney who represents Bridgeport children, told members of the State Board of Education earlier this year.

Other changes advocates are seeking include providing youths that break the law and have special education needs with an educational surrogate to help them get the services they require.

“Many children who should qualify for special educational services are not identified and do not receive appropriate services without effective advocacy,” Roger E. Bunker, a lawyer who represents incarcerated youth and also helps children with special needs get services, told the legislature’s Children’s Committee earlier this year. “Children with educational disabilities often act out because of anger, frustration, and embarrassment due to their inability to progress academically at the same rate as their peers…An appropriate education is critical for the future success of students and their ability to be productive members of society,” Bunker said.

The legislature did pass several bills that aim to reduce the number of children getting arrested and entering the juvenile justice system.

One bill expected to be signed by the governor requires any district that assigns a police officer to a school to clearly outline the role of that officer through an agreement between the district and police department. While research is mixed on whether there is a correlation between having a school resource officer and increases in school arrests, these required agreements seek to ensure students are arrested only when absolutely necessary. Several school districts already have signed agreements with their police departments — including Ansonia, Hamden, Hartford, Norwalk, Norwich, Vernon and Windsor.

Separately, the Judicial Branch also has begun sending minor infractions back to the schools to handle. The message: this is a school discipline issue, not an issue for the courts.

While the adopted state budget largely flat-funds the state’s juvenile justice services and diversion programs, an additional $1 million is provided in the upcoming fiscal year for the School-Based Diversion Initiative (SBDI). That program will train educators in 12 districts to identify children’s needs before their behavior becomes aggressive and to to use resources available in emergency situations so a student doesn’t have to be arrested.

“We need to move away from juvenile arrests,” Gov. Dannel P. Malloy said recently while touring an elementary school in the North End of Hartford that implemented SBDI and reduced the number of students arrested. “I think we can make additional major headway in diverting students.”