A second chance for CT youths who break the law? 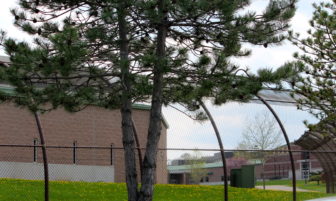 The Connecticut Juvenile Training School in Middletown, a locked jail for young males that break the law.

After running away from home again, Adam was arrested and jailed for stealing food and magazines from a Hartford bodega.

Thirty days later, he was still incarcerated as lawyers and a juvenile court judge tried to figure out what to do with the 17-year-old, who also was struggling with drugs and a mother who wasn’t showing up for his court dates.

“Do we want him in custody?” Beth Crawford, an attorney for the state’s child welfare agency, asked the adolescent’s social worker minutes before a juvenile court judge would consider committing him to the Department of Children and Families.

The answer to this question, while specific to each case, is one that judges, attorneys and lawmakers in Connecticut generally seem to have reached a consensus on.

“What we are trying to do in the state of Connecticut is get it right and move away from a system that assumes mass incarceration,” Gov. Dannel P. Malloy, a former prosecutor, said last month while standing outside the Connecticut Juvenile Training School, a high-security correctional facility for boys convicted of crimes not serious enough to land them in the adult court system.

“Mass incarceration has not worked in the United States, at least with respect to allowing people who have been incarcerated to turn their lives around,” the Democratic governor said after meeting with the inmates. “We’re trying to give a different answer to that.”

The number of youth incarcerated each year at the state’s pretrial detention centers and at CJTS has remained steady over the last several years, even as state law has changed so that 16- and 17-year-olds who commit less serious crimes are handled by juvenile courts instead of the adult criminal justice system.

The state’s goals is to reduce incarceration of minors by 20 percent in three years  by creating a more effective system for dealing with the underlying issues that too often land adolescents behind bars. But there are serious obstacles to overcome.

Each year, the pre-trial detention centers in Hartford and Bridgeport jail about 1,400 young people, and CJTS locks up about 200 individuals. Many of these youths will enter jail more than once.

Here’s who they are:

These trends have captured the attention of prominent state legislators and child advocates, who say the time is ripe to overhaul how the state responds to misbehavior as the governor pushes his “Second Chance Society” initiative, which largely seeks to reform the adult criminal justice system.

“The best thing that could happen out of all of this is that we close down CJTS all together,” said Rep. Toni Walker

“Kids make silly mistakes so we have to give our kids a second chance,”  Rep. Toni Walker, the co-chair of the state panel that is reviewing the state’s juvenile justice system, said during a budget hearing with court officials in March. “The best thing that could happen out of all of this is that we close down CJTS altogether. It just doesn’t fit with what we are trying to do.”

Former Gov. M. Jodi Rell proposed the state close the jail in 2005, but her efforts stalled when legislators elected not to provide funding so DCF could open smaller alternative facilities.

Research overwhelmingly shows that incarcerating juveniles is counterproductive, but the Malloy administration is not ready to close any of the locked facilities for juveniles, which house about 160 youths on any given day.

“The reality is, for me anyway, at least in my lifetime in this position, I don’t see us ever completely eliminating the need for a facility like CJTS,” DCF Commissioner Joette Katz told juvenile justice advocates last week at the state Capitol.

“The design hasn’t gotten any better,” Malloy said while standing outside the jail that opened in 2001. “This is not the right facility to have built. That’s a sad part of our state’s history…I don’t think this is the right approach for large numbers of people, so the smaller the population the better.”

The Malloy administration says closing any of the state’s locked facilities for juveniles in the near future is not realistic because they serve the purpose of taking young offenders out of bad situations.

“One or two of the young men made the point that they definitely needed a time out, but a time out doesn’t necessarily need to be measured by nine months or more,” the governor said. “Sometimes you have to get out of that environment before you recognize how bad it was and how different it can be.” 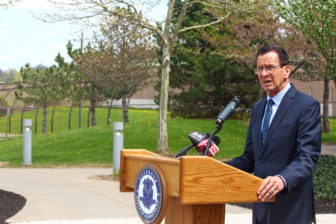 Gov. Dannel P. Malloy outside the entrance of the Connecticut Juvenile Training School in Middletown.

While state officials and child advocates agree that large locked jails are not conducive to rehabilitating young offenders, the state doesn’t track what happens to them after they leave custody.

So the facilities will remain open — half full at an annual cost to the state of nearly $50 million — as officials continue trying to keep as many adolescents as possible out of them.

The target of a 20 percent reduction in incarceration being sought by a state panel of legislators, the governor’s budget director and juvenile justice experts translates into 500 fewer offenders being jailed each year.

“Do we still have work to do? You betcha,” said Katz.

While the state works to improve the system, Adam — the black 17-year-old from Hartford — and those involved in his case all agreed the youth did not belong in the locked detention facility.

But there was no alternative for him that day, so he would have to wait in jail until his next court appearance in a month while his mother figures out how to pay for his drug treatment and a spot opened in one of the programs.

“How long that takes. I don’t know. He’ll be in detention until there’s an opening,” said Mike Walker, the adolescent’s public defender.

Juvenile courts in Connecticut typically are not open to the public. The Mirror was able to observe Adam’s court proceedings in February on the condition it not identify juveniles in the system. Adam is a pseudonym.

Part 2: The state’s strategy to improve the system — and what advocates say still needs to be done to help young offenders