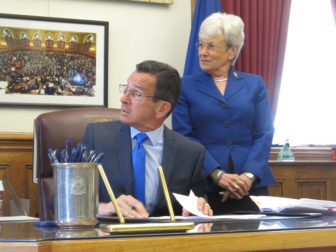 Gov. Dannel P. Malloy and Lt. Gov. Nancy Wyman at the signing of the budget bills.

The rocky path to a fiscal plan for the next two years ended Tuesday with Gov. Dannel P. Malloy signing the budget adopted June 3 in the closing minutes of the 2015 session — and tax rollbacks passed earlier Tuesday in special session to quell an outcry from business interests.

The budget includes tax increases that violate a pledge the Democratic governor made during last fall’s close re-election campaign, and its passage exposes Democratic legislators in swing districts to attacks as they seek re-election in 2016, a campaign that the GOP already is waging.

Malloy did not directly answer a question about how he can reconcile the budget he signed with his campaign pledge. Instead, he said the GOP offered no practical alternative.

The governor and Democratic legislative leaders, House Speaker J. Brendan Sharkey of Hamden and Senate President Martin M. Looney of New Haven, portrayed the budget as a responsible effort to maintain core services while making a commitment to transportation investments and property-tax reform.

Senate Minority Leader Len Fasano, R-North Haven, who worked with the administration to win bipartisan support for a major criminal-justice reform bill, challenged the governor to directly address his failure to deliver on a campaign promise to avoid tax increases.

“Why won’t he just admit that he broke his pledge to the people?” Fasano said. “I hope that a year from now, when Connecticut will, without a doubt, be facing another deficit, the governor will have the courage to own up to the fact that this budget did nothing to change the structure of how our state taxes and spends.”

The revisions that won final legislative passage early Tuesday rolled back $178 million of the $1.5 billion worth of tax hikes built into the original two-year budget. The final spending plan for the biennium beginning Wednesday is $40.25 billion.

The non-partisan Office of Fiscal Analysis projects significant shortfalls in two years, leaving transportation advocates to worry that one of Malloy’s accomplishments — dedicating a half-point of the 6.35 percent sales to the special transportation fund — will collapse under the need for more general-government revenue.

“You can poo poo it or whatever you want to do and say that things could happen in the future,” Malloy said.

The governor insisted he would go before legislators again to secure the legal “lockbox” he says is necessary to protect the state’s new investment in transportation. He hinted it could come in a special session later this year. 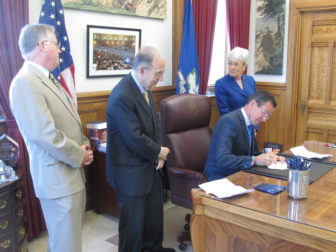 Malloy began the year talking about a constitutional amendment to ensure new funding sources for transportation couldn’t be diverted from that purpose in the future.

But by his State of the State Address on Jan. 7, Malloy was insisting on using the state’s transportation bonds to craft the lockbox.

The governor specifically threatened to veto any transportation funding plan if lawmakers didn’t also authorize Treasurer Denise L. Nappier to build a no-diversion pledge into future bond covenants — essentially the contracts between Connecticut and the investors who buy its transportation bonds.

What the governor got instead was a statutory provision in the budget that prohibits diversions, which any subsequent legislature can erase with a majority vote.

Republican legislative leaders jumped on the absence of a legally binding lockbox Monday.

Malloy said he still believes a constitutional amendment protecting the transportation revenue would be preferable.

“Last night’s step was the first step to getting to the constitutional and I believe that, relatively shortly, we’ll have a constitutional,” he said. “I believe it is absolutely what we need.”

The next regular General Assembly session doesn’t convene until February, but the governor added he might approach lawmakers about this “maybe sooner than later. … I am not done pushing for this.”